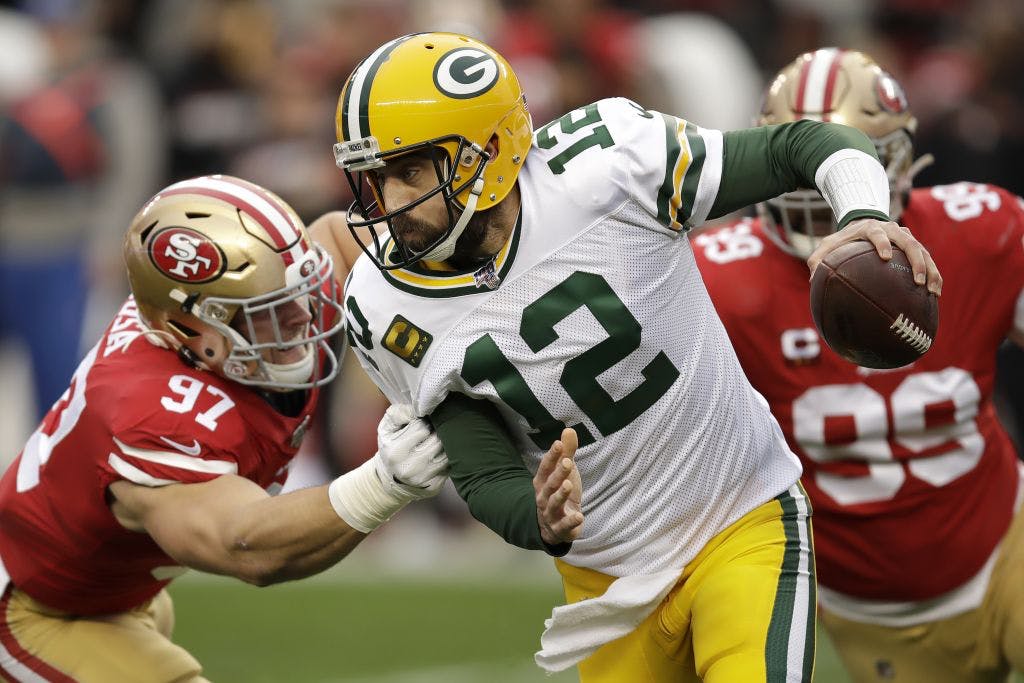 Interesting Thursday night clash here between two NFC teams that are coming off losses. The 49ers will host the Packers from Levi’s Stadium at 8.20pm (ET) and we have a full preview and betting picks for the clash below.

The Packers started the season as the hottest team in the league, winning their first four games on the trot and covering the spread comfortably in all four. They have gone on to lose two of their next three games, and are coming off an unexpected loss to divisional rivals in Minnesota in Week 8.

Scoring defense has been a bit of an issue for the Packers, allowing over 26 points per game through their first seven. They allowed 28 to the Vikings in Week 8 and 38 to the Buccs in their previous loss back in Week 6.

They come up against a 49ers team that has been pretty solid defensively this season, especially against the pass. San Francisco  have allowed just 209.0 passing yards per game, which is ranked fourth in the entire NFL. Back Aaron Rodgers to go under here, especially after averaging just 244.7 yards per game over his last three.

The 49ers have been absolutely decimated by injury this season. They will be without Jimmy Garoppolo, Tevin Coleman, Deebo Samuel, Demetrius Flannigan-Fowles, Brandon Aiyuk, Trent Williams and George Kittle for the Thursday night clash, which really puts a dint in both phases of their game.

Nick Mullens will be starting at QB with Jimmy. G out of the line-up. Mullens has made two starts this season and actually been pretty serviceable in both. He averages 290.5 passing yards per game and has a 3-0 TD-interception ratio in those two starts.

We still like the under for Mullens on passing yards this week. Green Bay have been pretty solid against the pass depsite allowing over 26 points per game. They sit in the top 12 in the league for passing yards allowed per game and put the clamps on Kirk Cousins last week, allowing him to pass for just 160 yards.

The 7.5 point line is a tricky one but we are still siding with the Packers. There comes a breaking point where injuries are too much and we feel like the 49ers might be at that breaking point this week. The Packers also have a lot to play for as they attempt to bounce back from a disappointing divisional loss.

If you’re willing to buy this line down to just 7 points, we’d like that much more.