Welcome to our full review of FanDuel Sportsbook! In this review, we’ll be recapping some of the key features at FanDuel Sportsbook, including some revolutionary functions that they have implemented on their website and mobile app.

We’ll also be taking a look at the fantastic sign up bonus off available to new customers at FanDuel, worth a whopping $500!

Best known as being one of the biggest sports daily fantasy sites in the world, FanDuel expanded into the sports betting scene in 2018 after the company was purchased by European gambling juggernaut Paddy Power (owners of Betfair, Paddy Power, Sportsbet and TVG). FanDuel opened its first physical sportsbook in July of 2018 and shortly after, their online sportsbook was launched.

Back in 2016, FanDuel and DraftKings agreed to merge, however, after the Federal Trade Commission threatened litigation over the deal because it would create a monopoly, the merger agreement was terminated in 2017, allowing Paddy Power to swoop shortly after.

Currently, FanDuel Sportsbook is only available in Indiana, New Jersey, West Virginia and Pennsylvania. Customers can also use in-store FanDuel booths in New York and Iowa.

FanDuel have a fantastic sign up bonus offer for new customers that is exclusive to Total Sports Picks readers! We will outline the bonus in full below as well as run you through some of the key terms and conditions and any promo codes that are required to claim the offer.

Sign up to FanDuel Sportsbook through the Total Sports Links and you’ll receive a fantastic promotion. If your first bet at FanDuel loses, it will be refunded in site credit (bonus bets) up to the value of $1,000!

The Promotion is only open to individuals who are at least 21 years of age and are physically present in New Jersey during the Promotion Period.

While many other Sportsbooks in the United States require a promo code to claim their bonus offers, that is not necessary at FanDuel. Simply sign up to FanDuel through the Total Sports Picks links and you will automatically be eligible for the risk free bet.

First bet refunded in bonus bets if loses up to value of $1,000

What is the maximum value of the offer?

Users can claim up to $500 in value with this sign up promotion.

Who is eligible for this promotion?

New customers to FanDuel can take advantage of this offer.

Can I claim this promotion in my location?

Currently, only residents of New Jersey can claim the offer.

FanDuel are ahead of the game when it comes to fluidity of both their website and mobile app. They also offer a great range of functions including revolutionary teaser and parlay tools as well as a full online casino feature and a partnership with a top online racebook.

We will take you through some of the sports on offer at FanDuel as well as some of their key features below.

The only downfall to FanDuel at the moment is their range of sports. Currently, they only offer markets on nine different sports. However, they cover those sports extremely well and we expect that number to grow in the near future.

Having an international gambling conglomerate like Paddy Power backing you looks like it has some benefits. While online sports betting as a whole is still in relative infancy in the United States, FanDuel Sportsbook are already leaps and bounds ahead of the competition. Their website looks fantastic, it’s easy to use and has some fantastic features.

Like most modern age sportsbook websites, it utilizes the three-panel system. A full menu of sports and racing events can be found on the left-hand side, the range of markets for the selected event in the middle and the bet slip and account information on the right. It’s a model that has become standard in online sportsbooks for one reason, it’s efficient and it works!

The mobile app is as well designed as the website is. It features an easy to use user interface and allows you to sort through the wide range of betting markets available with ease, which is what’s most important when you are betting on the go.

You can access the FanDuel Sportsbook mobile betting app on both iOS and Android devices. 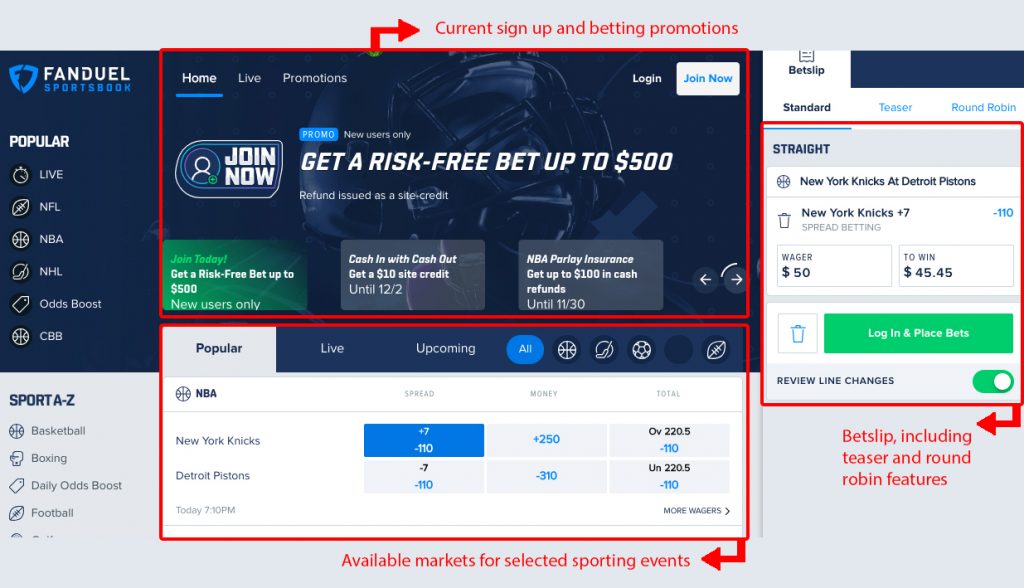 One feature that we absolutely love about FanDuel that we have yet to come across on any sportsbook around the globe is the ‘Teaser’ bet slip feature. As well as placing a standard parlay, FanDuel allows you to automatically create a ‘teaser’ by adding multiple selections to your bet slip then adjusting the point line to your liking while the odds automatically adjust in real time.

It’s an incredibly easy way to add two spreads and adjust them to your desired odds without having to add a different bet to your betslip each time. 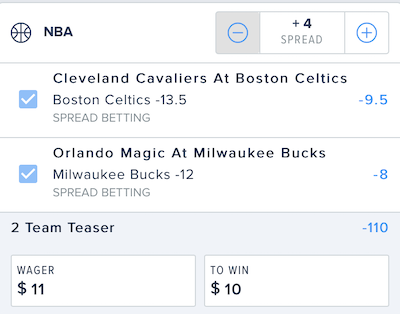 The FanDuel brand itself doesn’t feature an online casino or racebook within their web, however, there is a tab at the top of the page that links directly to the Betfair Casino and popular racebook, TVG.com.

Both are owned and operated by FanDuel’s parent company, which makes it incredibly easy to transition between the three different facets.

Be sure to check out our full review of the TVG.com product and claim your sign up bonus there.

Thanks for reading our review of FanDuel Sportsbook. We hope it was informative and helped in your decision to choose FanDuel as your sportbook! Be sure to sign up to FanDuel through the links in the article to make yourself eligible for hte $500 risk free bet on your first bet.

Total Sports Picks sometimes receives compensation from the sites we review. Rest assured, we review each site thoroughly and only give high marks to the very best. The thoughts expressed here are our own. For full details, see our Terms section. We also make every effort to keep all content as up to date as possible, but take no responsibility for any incorrect information on the page. If you have questions or spot something that needs updated, give us a shout via our Contact Us page.