Week 8 of the NFL season kicks off on Thursday night with the Panthers hosting the Falcons from 8.20pm! As usual, we have you covered with a full preview and betting picks for the clash below.

The Falcons have had one of the most amazing seasons to date. They are just 1-6 on the season but at one stage in three of their games, they have been a 99% chance or greater to win the game in the eyes of the bookmakers.

They led the Cowboys, Bears and Lions late in the game but failed to win any of the clashes, and they now sit dead last in the NFC South and they are tied for the worst record in the South.

There has been little to celebrate for the Falcons, but the play of quarterback Matt Ryan has actually been pretty solid, racking up 311.6 passing yards per game and an impressive 12-3 touchdown-interception ratio. He has passed for 354.5 yards per game over his last two and in 25 career games against the Panthers, he averages 273.8 yards per game.

The Panthers have been surprisingly competitve this season despite losing the best player, Christian McCaffrey to an anke injury earlier in the year. McCaffrey has healed from the innjury and looks set to make his return this week against the Falcons, giving the Panthers a massive boost on offense.

The Panthers are 3-4 on the season so far but have lost their last two in fairly close games to the Bears and Saints. They are 4-3 against the spread and have already beaten the Falcons once this season, a seven point win in Atlanta back in Week 5.

Teddy Bridgewater has been admirable this season, averaging 275.7 passing yards per game. With McCaffrey back in the line-up though, we think his attempts take a slight drop as the star running back demands more of the ball. 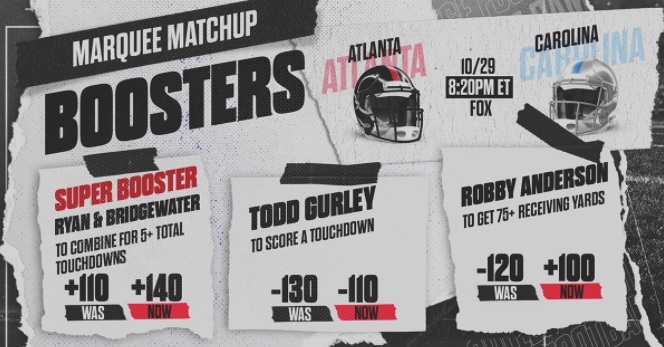 The Falcons record is really decieving. They have been right in the mix of most of their games and should probably be 4-3 at the very least, not 1-6. They will be desperate to bounce back in the division and start as two point underdogs here. They penny has to drop for them sooner or later, and we feel like it could be this week on Thursday Night Football against a Panthers team that is playing well above themselves at the moment.