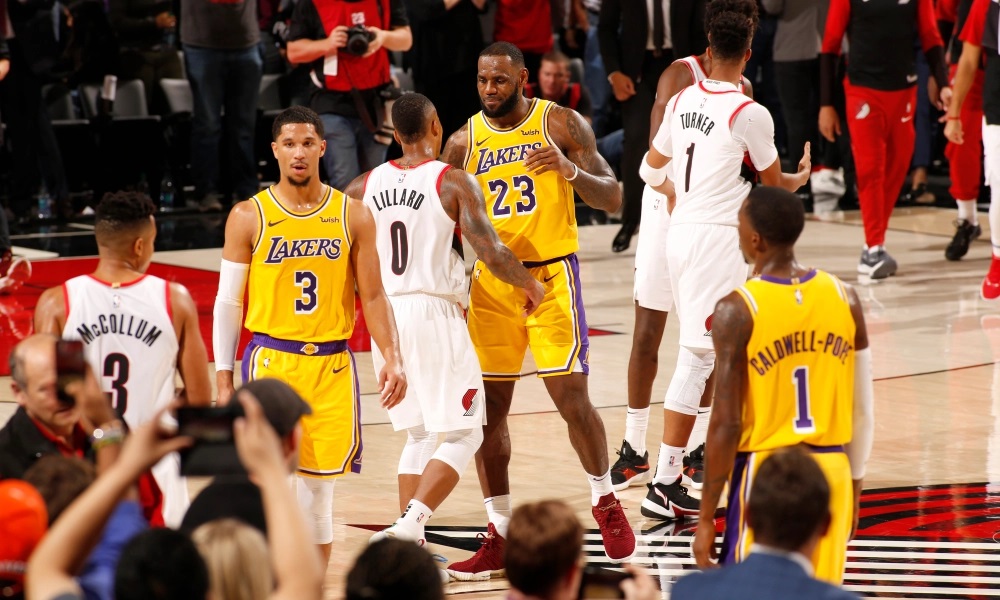 The Portland Trail Blazers needed just one of the two games to defeat the Grzzlies and earn the eighth seed in the Western Conference. Their prize? A first round matchup with LeBron James and the Los Angeles Lakers.

The Lakers finished the regular season with a Western Conference best 52-19 record. They have been a little underwhelming in the Orlando bubble so far, but that was to be expected as they only needed to pick up a few wins to secure the top seed in the West. They finished the eight games with a 3-5 record, with their core players playing limited minutes in a bunch of their games.

Depth at the guard position continues to be an issue for the Lakers, however, Rajon Rondo entered the bubble a few days ago and while he will be out for this series through his quarantine protocols, he could serve as a valuable addition in the later rounds. There are things to like about the Lakers, like the current form of big man Anthony Davis, but there are also things to be wary of, like the fact that Dion Waiters and J.R. Smith will likely be a big part of this playoff run.

Kuzma has to assert himself as the teams primary scoring option off the bench and aid support on offence to LeBron James and Anthony Davis. You know what you are going to get from those two superstars, but Kuzma is the wild-card that could go off for 25+ on any given night. The Blzers can score with the best of them, so that third scoring option for the Lakers becomes extremely important when they will likely have to score 115+ to win games.

Can the Blazers fairy-tale run continue with an upset win over the Lakers? After getting key players Jusuf Nurkic and Zach Collins back from injury at the start of the bubble, it seemed destiny that the Blazers would force the play-in and make their way into the NBA playoffs. The Western Conference finalists from last season are just too good of a team to be sitting at home watching the post-season.

Star point guard Damian Lillard put up a monster 37.6 points per game as the Blazers went 6-2 to climb up the standings before dropping 31 points in the win over Memphis to clinch the eighth seed.

If there’s one thing that the Blazers sorely lack ahead of their matchup with the Lakers, it’s a versatile wing that is able to guard LeBron James. Gary Trent Jr. might only be 6’5 but he’s probably the best option they have at stopping James. Needs to be massive defensively in this series. What the Blazers would do to have Trevor Ariza playing in the bubble.

The Blazers defense is a real issue here, but that’s nothing new to them. They went 6-2 throughout the bubble by putting up high scores and they’ll back themselves to do so in this series. They possess two scoring powerhouses in Damian Lillard and C.J. McCollum and although he is on the wrong side of 35, Carmelo Anthony can still be a nightmare on the offensive block.

I have no doubt that the Blazers will win at least two games in this series through sheer shooting prowess and scoring ability. The Lakers just don’t have the shooting to match the Blazers if they get hot. Back the Blazers to make a series of this.

Game 1 is a little hard to read here because the Blazers will be coming off limited rest and should be pretty fatigued after the monumental run they made to reach the NBA playoffs. The bookmakers have set the total point line pretty high in this one and we are opting to take the under here as both teams figure out their offenses in this new series. Under 229.5 Total Points (-110 at DraftKings) ✅

The Blazers pulled out an upset win in Game 1 in what was an extremely tight game for about 44 minutes. In the last few minutes of the game, the three ball finally starting falling for the Blazers, as they hit a few clutch bombs to snatch victory. Anthony Davis can’t sot idle for another game. Expect him to come out firing and the Lakers to bounce back here. Lakers -6 (-110 at DraftKings) ✅

The Lakers flicked the switch in Game 2 and as predicted, Anthony Davis came out guns blazing, scoring 31 points en route to a blowout LA win. Worrying signs for the Blazers with Damian Lillard suffering a suspected dislocated finger. With a lot of unknown still surrounding this game all the way until tip off, we can’t back the Blazers with any confidence here. Lakers -7.5 (-110 at DraftKings) ✅

LeBron James finally stamped himself on this series in Game 3, recording a monster 38-12-8 night as the Lakers won by eight points. If there’s one thing that is certain, it’s that the Blazers won’t die wondering here. Lillard in particular will come out firing in Game 4 and will either go big or die on his sword. At +7.5 again, we can see the Blazers covering in a close game that could go either way. Blazers +7.5 (-110 at DraftKings) ❌

We suffered our first loss of the series in Game 4 as the Blazers laid an absolute egg. They went down by 20 points and never really looked in the contest. To make matters worse, star point guard Damian Lillard went down with a knee injury, and his availability for Game 5 will likely be questionable all the way up until game time. The Lakers look to have a strangle hold on this series now. Back them to win another high scoring game in Game 5. Lakers -7.5 (-110 at DraftKings) ✅