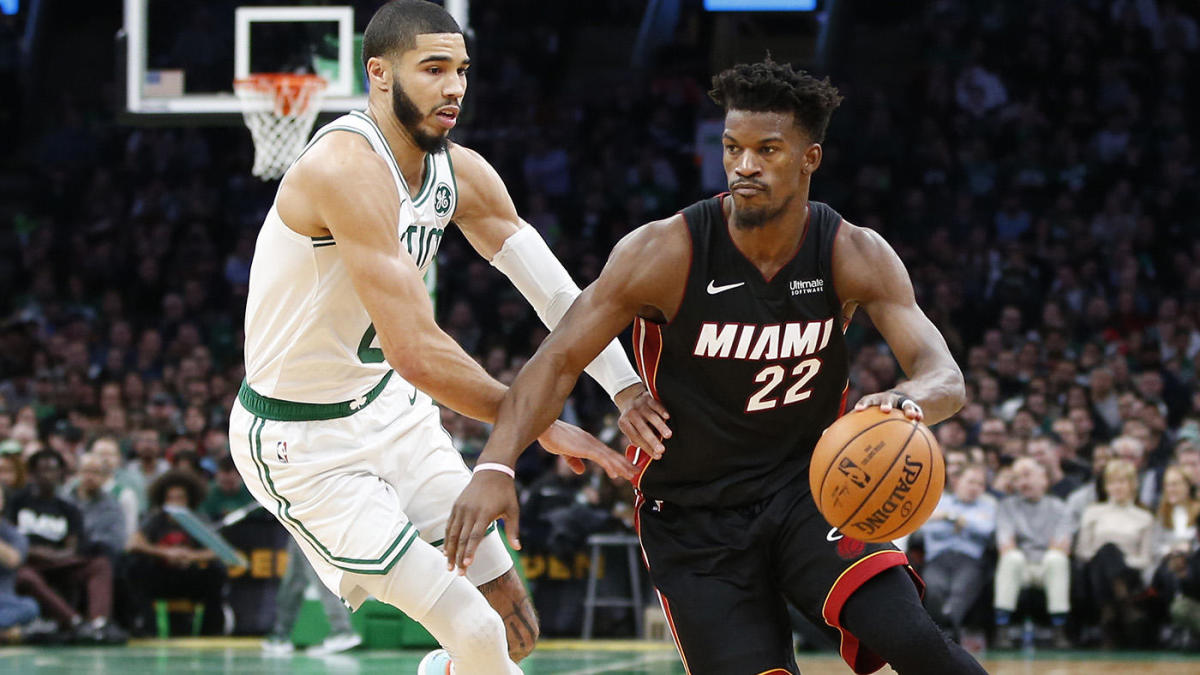 It’s safe to say we weren’t expeting this matchup in the Eastern Conference Finals! The Boston Celtics and Miami Heat will do battle in a best of seven game series starting this Tuesday night for a chance to advance to the NBA Finals.

The Celtics were dominant in the first round against the 76ers, sweeping their opponents in four games with an average winning margin of 11.75 points. The job wasn’t as easy in the second round, as they took all seven games to defeat the reigning champion Toronto Raptors.

While the series went to seven games, the Celtics always looked to have control. They took a 2-0 lead and were just 0.3 seconds away from winning game three before a buzzer beater from O.G. Anunoby stole the game and the Raptors went on to level the series. Boston once again took the series lead in Game 5 before the Raptors bounced back again. Ultimately, it was defense that got the job done in Game 7 as the Celtics held their opponents to just 87 points in the win.

The key for the Celtics this series will be defending the three ball. Luckily, they have an abundance of personnel to do so. Miami were the 2nd best 3pt shooting team in the league throughout the regular season and have been shooting a ridiculous clip throughout the first two rounds. Boston had the best 3pt defense in the league this season and have a bunch of talented perimeter defenders in Marcus Smart, Jaylen Brown and Jayson Tatum to lock down the Heat smalls.

You can talk all day long about the Boston Celtics star quartet of Tatum, Brown, Hayward and Walker but their engine and the thing that makes them tick especially on defense is Marcus Smart. Smart had a triple double in Game six of the second round and was locked in on defense throughout the series, gaining extra possessions for his team in ever game. Will have a huge job guarding the likes of Tyler Herro, Jimmy Butler and Goran Dragic this series.

You can’t fault what the Heat have done in the first two rounds of the NBA Playoffs. They were dominant in the first round, recording a 4-0 sweep against the Pacers and in the second round, they shocked the basketball world with an upset win over the top seed Milwaukee Bucks.

Their defense against the Bucks was fantastic but it was their three point shooting that was the catalyst in the upset series win. The Heat were the second best three point shooting team throughout the regular season and have a bunch of talented marksman among their ranks in the likes of Jimmy Butler, Tyler Hero, Goran Dragic, Duncan Robinson and Kelly Olynyk.

While the Bucks were only a mid-level team at defending the three this season, the Celtics were the best in the league. Miami won’t be able to rely on getting organic open looks from beyond the arc against the Celtics, instead they’ll need their best player Jimmy Butler to take control of the playmaking.

Many have questioned Butler’s ability to be the best player on a Finals or Championship team. This series could be his coming of age. If he leads the Heat to a series win here against a team that has more star power and more talent on paper, no one can question him anymore.

What a tough series to call. The Celtics no doubt have the advantage on paper but the Heat have never been a team that relies on star power or big names to get the job done.

Boston start as slight favourites in the series, and we are having an incredibly tough time picking it one way or another. Whoever wins their one and advances to the finals, we think this series goes deep.

Game 1 of the series is set for Tuesday night as the curtain raiser to the Clippers and Nuggets Game 7. Who will take the ascendancy in this series? Tough to call with these teams being so evenly matched. We do like the unders in Game 1. Both teams have fantastic defenses and of the 14 Round 2 games that these two teams were involved in, 9 of them went under.

We opted to stay away from Game 2 and 3 because we just couldn’t get a handle on this series. Boston seemed to be the better team in both Games 1 and 2 but couldn’t’ get the win. Order was restored somewhat in Game 3 with a comfortably Boston win and the return of Gordon Hayward. We think they carry on the momentum in Game 4 and level the series.

The Celtics couldn’t get the job done in Game 4 and now find themselves in a hole down 3-1 and facing elimination. We have to think they will be giving it absolutely everything with their season on the line in Game 5. Back them to bounce back and win to keep the series alive for at least one more game.