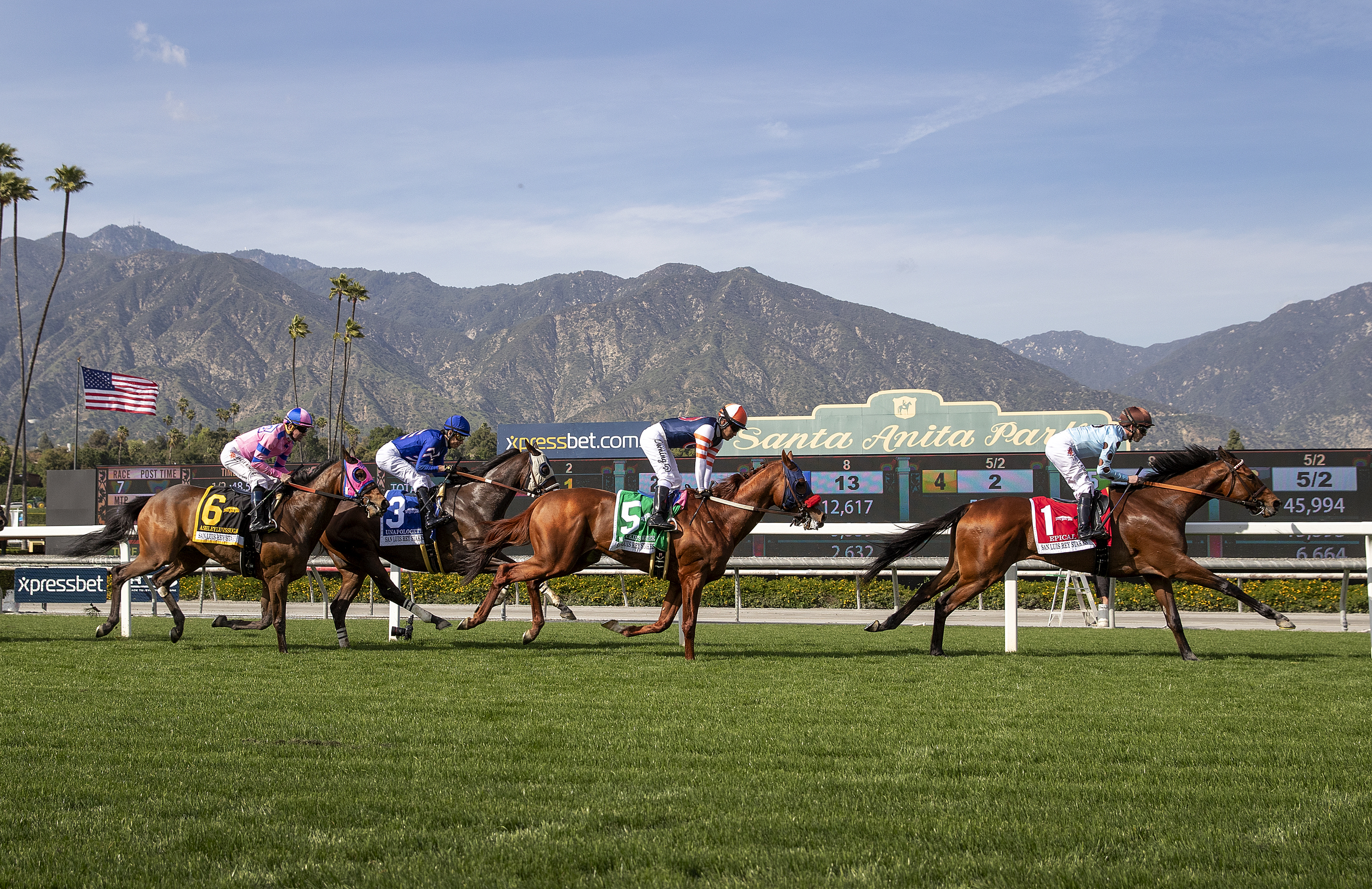 It’s a consequential weekend for the Kentucky Derby with three points races. They essentially serve as “win and you’re in” Louisville with 50 points going to the respective winners. The trio includes the Tampa Bay Derby, The Gotham Stakes at Aqueduct, and the San Felipe Stakes at Santa Anita, which is the focus of our picks this weekend.

LIFE IS GOOD (PP: 1 ML 4/5) is currently the second favorite to win the 2021 Kentucky Derby in the latest futures pool. He’ll look to follow in last year’s Kentucky Derby champion AUTHENTIC’s footsteps by winning the San Felipe. He is the one to beat here.

THE GREAT ONE (PP: 5 ML 4-1) won his last race by 14 lengths; albeit, it was just a field of four. However, he ran his fastest fractions for the first half-mile in any of his races of at least 1 mile. The same race and he can put his name on the Derby contenders list.

DREAM SHAKE (PP: 2 ML 5-1) won his debut with a strong last move and one of the top, first race speed figures for this crew. He should be better in his second start and the extra distance should work to his advantage.

ROMAN CENTURIAN (PP: 7 ML 8-1) missed by a neck in his last race to MEDINA SPITIT (PP: 3 ML 7/2) and finished a well beaten fourth in his debut versus LIFE IS GOOD. He could turn the tables on MEDINA SPIRIT with added distance, long shot to overtake the chalk.

Exacta: #1 LIFE IS GOOD to win and #2 DREAM SHAKE, #5 THE GREAT ONE or #7 ROMAN CENTURIAN to finish second.

Trifecta: #1 LIFE IS GOOD to win and #2 DREAM SHAKE, #5 THE GREAT ONE or #7 ROMAN CENTURIAN to finish second and third (add MEDINA SPIRIT if any scratch).

CLICK HERE TO BET ON THE SAN FELIPE STAKES AT TVG.COM

A competitive field of nine will race 7 furlongs on Santa Anita’s main track, it’s not a common distance and has favored inside speed horses during the current meet.

BRICKYARD RIDE (PP: 6 ML 3-1) is a horse for the southern California course. He’s tried Santa Anita dirt five times, winning four of them with a third. His last race was one of the trips to the winners’ circle with his best and the field’s highest, last race speed figure. The same race probably ends in the same place.

TIGRE DI SLUGO (PP: 9 ML 5/2) finished second to BRICKYARD RIDE in his last race as the 2 to 1 favorite. He failed as the favorite once before and rebounded to win the next race. Trainer Mike Puype wins at 20% in the trip after failing as the favorite, both histories suggest TIGRE DI SLUGO will be a factor.

STRONGCONSTITUTION (PP: 5 ML 20-1) looks awful based on his four most recent races, but they were on turf. If you look a little deeper, you’ll see he’s raced a ton better on dirt than his 20 to 1 morning line. He has two seconds and two thirds in four on dirt.

EXAULTED (PP: 7 ML 10-1) has never missed the board in four races with a win, two seconds and a third. He’s made his first start following a short rest in his last and ran his best rest with his fastest half-mile time and his second best 6 furlong fraction, usually a god sign for the next outing.

CLICK HERE TO BET ON THE SAN CARLOS STAKES AT TVG.COM

One mile on the Santa Anita grass for a field of 10. It’s a good betting race for horseplayers with RIDE A COMET (PP: 9 ML 7/2) as the morning line favorite.

SMOOTH LIKE STRAIT (PP: 1 ML 4-1) is a head bob away from winning the three in a row and five of his last six. Winning is nothing new for the four-year-old as he’s won six of his last 10 and has two seconds as well. He’s done well at Santa Anita too with three wins, a second and third in six efforts.

HIT THE ROAD (PP: 2 ML 4-1) is a win or go broke horse with five trips to the winners’ circle and nothing else in eight races. His record includes three wins in four Santa Anita and all five of the wins come in seven at the distance.

FLAVIUS (PP: 6 ML 6-1) has some of the top, mid-pace figures in the field and charges hard late. Sometimes he gets a little too far back to make up the ground before the wire. Maybe top jockey Flavien Prat put him closer to the front than usual without pushing too hard early.

RIDE A COMET (PP: 9 ML 7/2) has been at his best on grass and at the distance. He’s run 1 mile on the turf three times, winning them all. Overall, he’s raced on turf six times with five wins. This will be his first at Santa Anita which is the only question he has to answer.

CLICK HERE TO BET ON THE FRANK E. KILROE MILE STAKES AT TVG.COM