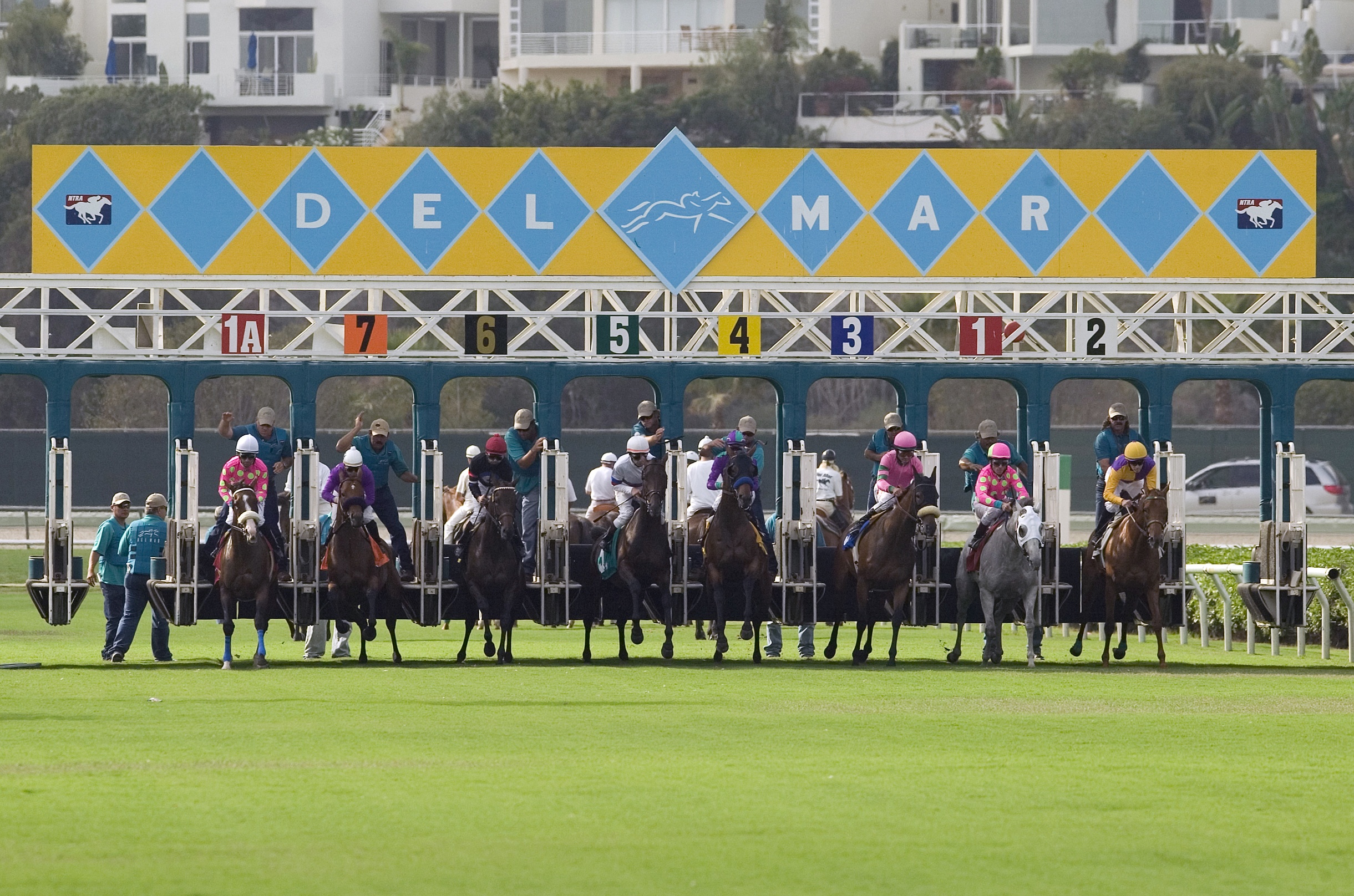 To paraphrase Sir Elton John lyrics, Saturday night is all right for racing, get a little action in… Del Mar will be where all the Saturday night racing action will be found. The track dubbed where the turf meets the surf hosts one of its biggest meets of the summer.

There isn’t much of a post position advantage. However, running style has played a major role in the outcome in the last 10 Del Mar Oaks. Seven of the last 10 Oaks champions were seventh or further back after the opening quarter mile.

MADONE (PP 4 ML 5/2) is a horse for the course, winning three of three starts at Del Mar, including her last. She’s making her second start following a layoff and normally runs as well, maybe a little better in her second start after some rest.

SOARING SKY (PP: 9 ML 12-1) is shipping in from Ireland where she’s run in some average races. She’s run well since moving from and all-weather surface to turf. Many times, Irish/English horses respond well to hitting firm, fast American grass for the first time.

JAVANICA (PP: 2 ML 10-1) has run seven quality races in nine starts. She tried frontrunning for the first time in her last race and won. No doubt, she’ll try it again here. The key to her going back-to-back, wire-to-wire wins is moderate fractions. As, potentially, the lone speed in the race, she could dictate the pace from gate to wire.

GOING GLOBAL (PP: 3 ML 9/5) is the morning line favorite and lively post time choice too. It would not be surprising to see her odds drop as she’s been even-money or less in her last four outings. It’s easy to see why as she’s a half of a length away from winning six in a row.

CLICK HERE TO BET ON THE DEL MAR OAKS AT TVG.COM

This one is on the dirt and the field will travel 1 1/4 miles for the title. Speed has been the style of choice for the major majority of the last 10 Classic winners. Eight of the last 10 to score the Pacific crown were in the first three at the quarter-mile marker.

TIZAMAGICIAN (PP: 2 ML 5-1) tis the fastest horse out of the chute in this field. He’s found the way into the winners’ circle via frontend speed in half of his last eight races. His last start set a career high mark for speed figure and tops for this crew. The same race equals the same result.

EXPRESS TRAIN (PP: 5 ML 3-1) is the other hot rod in the field that should be all out when the light turns green. He loves himself some turf meeting the surf with three wins and second in four at the Southern California course; no wins in eight elsewhere.

ROYAL SHIP (PP: 4 ML 7/2) appears to prefer running on dirt to grass. His connections shipped him in from Brazil where he was running on turf. He tried his luck on this side of the America’s grass, without success. Trainer Richard Mandella switched to dirt and the light has switched on. He has a win, second by a head and a third by 1 ¼ lengths in his last three.

INDEPENDENCE HALL (PP: 7 ML 5-1) was the 3/5 favorite in a Grade II in his last start but failed to deliver, getting bounced to third by 9 ¾ lengths. Trainer Michael McCarthy rebounds at 25% with disappointing chalk in the next trip around the course.

CLICK HERE TO BET ON THE PACIFIC CLASSIC STAKES AT TVG.COM

It’s a long run, 1 3/8 miles on Del Mar’s turf course. Much like the Oaks, post position doesn’t seem to matter and favors endurance runners over sprinters with seven of the last 10 Handicap winners considered stalkers/closers.

RED KING (PP: 3 ML 8-1) returns to the site and race of his last win as the defending champion. The race suits him as he has some to the best of late numbers in the field. Although he’s gone through a dry spell, he popped the top, last race speed figure by a sizeable margin. Maybe, he’s ready to defend his title.

UNITED (PP: 2 ML 2-1) finished as the runner up to RED KING by a neck last year in this spot. Revenge is on the menu! He’s at the track and has the jockey/trainer combo to get to the wire first this time. He has three wins and two seconds at Del Mar. Top jockey Flavien Prat and trainer Richard Mandella have won four of seven together.

ACCLIMATE (PP: 7 ML 10-1) has faced off against many of these with mixed results. Last time, he came out on top and then headed to the barn for some rest. He has one path to victory here, get out to a sizeable lead and hold on for dear life at the end. If he can get away with running the first 6 furlongs in 1:13.5 seconds or more, he might have enough gas left.

ARKLOW (PP: 8 ML 5/2) had some issues at the start of his last outing. He clipped heels and stumbled his way out of the gate. His race was over from there; so, toss it out. Prior to his missteps, ARKLOW won two in a row, including his only start at Del Mar. The biggest concern is a lackluster record at the distance, just a second and third in four tries.

CLICK HERE TO BET ON THE DEL MAR HANDICAP AT TVG.COM