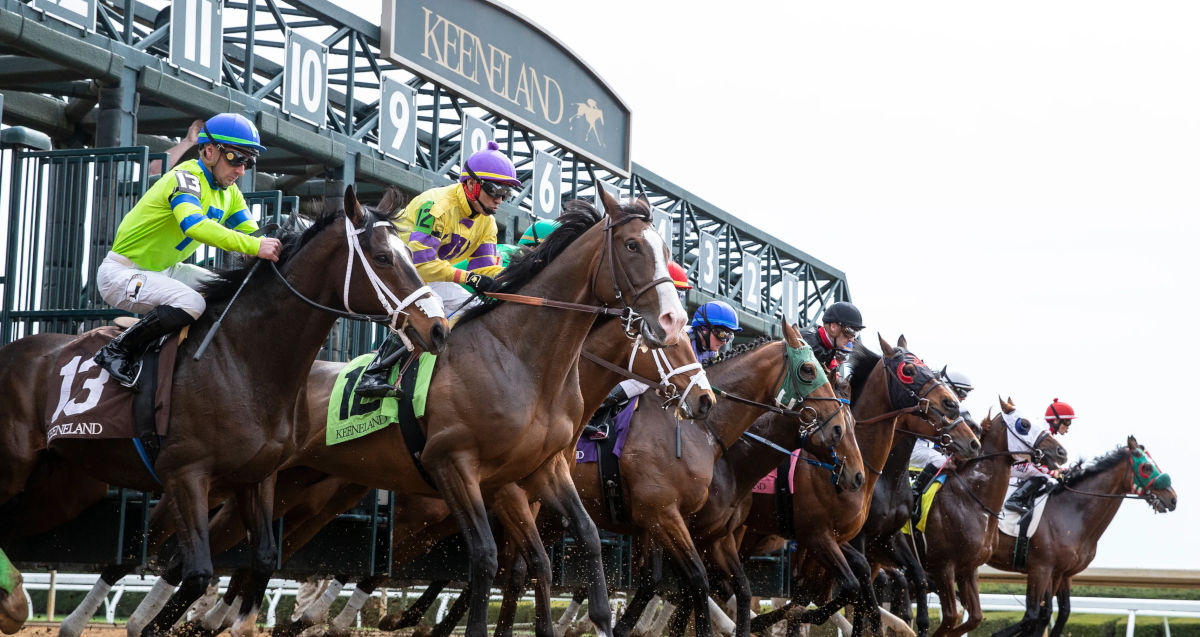 It’s a last chance weekend for owners, trainers and horses with hopes of getting an automatic bid to the Breeders’ Cup in November.  Keeneland Racetrack is the hot spot for horseplayers keeping an eye on Breeders’ Cup “win and you are in” spots.

The Lexington, Kentucky course plays host for eight of the last 10 qualifiers with seven across Saturday and Sunday. Our focus is on Saturday’s card.

She who runs the fastest 6 furlong race in the main track gets an automatic bid to the Breeders’ Cup Filly & Mare Sprint. Expect the winner to be upfront early based on Keeneland’s spring meet. Nearly 75% of those to find the winners’ circle at the distance/surface were considered early speed.

BELL’S THE ONE (PP: 6 ML 7/5) absolutely loves to run 6 furlongs. She’s done it six times, taking home the top prize in five of them with a second by just a neck in the other. Her workouts suggest another knockout effort here.

FRANK’S ROCKETTE (PP: 1 ML 5/2) wears the red number one and the rail hits at close to 20% at the distance/surface. The last couple of times she donned the one, she won.

INTHEMIDSTOFBIZ (PP: 3 ML 10-1) knows where the finish line is located, especially at 6 furlongs where she won seven of 14, including a big win in her last race at Keeneland. She’s another that could improve in her second start following a layoff.

In addition to a free pass into the Breeders’ Cup Juvenile, the champion here also earns 10 points towards the 2022 Kentucky Derby as this spot doubles as a Derby qualifier. Anything can happen with two-year-old horses over the 1 1/6 mile run on the main track. The babies are unpredictable.

DON’T WAIT UP (PP: 5 ML 9/2) probably won’t wait long to take the lead as he went wire to wire in his last race, recording the highest speed figure for this deep field. He’s put in two fast workouts since and should be sharp again.

CLASSIC CAUSEWAY (PP: 13 ML 5-1) is way outside, which usually isn’t an issue at the distance/surface on the main course. In fact, it can be a benefit.  He won his debut with ease, by 6 ½ lengths. He could have more in store if needed.

DOUBLE THUNDER (PP: 1 ML 4-1) is another that is prepping with some good works for this spot and rides the rail. He has three wins in four starts, two of the three came when he started wearing the one on his apron.

GREAT ESCAPE (PP: 9 ML 8-1) got better in his second start compared to his debut, something we like to see. All of his internal numbers improved, and he ran on to win in a deep field of 10 horse as the favorite, expect another step up today.

It’s in the name, a field of 13 will race 1 mile on the turf course to see who gets the pass on through to the Breeders’ Cup Mile in November. Horses with a strong late run tend to fare the best at the distance and surface. Coffee is for closures and most like Keeneland Turf Mile winners too.

IVAR (PP: 6 ML 5-1) wins or usually busts. He has five wins in nine starts with a third; four of the five and the third were in eight grass goes. The trainer is putting blinkers back on IVAR in hopes of getting off to a better start. When he does break alertly, he’s usually a big threat to win.

ORDER OF AUSTRALIA (PP: 10 ML 7/2) won his only race in the United States, the 2020 Breeder’s Cup Mile. He’s hoping to take this one too so he can defend his title. He’s faced some tough competition in Europe but hasn’t been running as well this year as last.

IN LOVE (PP: 3 ML 20-1) is something every horseplayer wants, a live longshot with a chance to win. He ran one of the best races of any this field in his last race, a win by 2 ½ lengths. He’s won two in a row and just a neck away from three of his last four. His resume says he gets better in the second start after some rest, looks like a live longshot.

SOMELIKEITHOTBROWN (PP: 13 ML 9/2) has the class but unfortunately gets a rough draw being way outside. He likes to go fast early, and he’ll be one of the fastest early, but will need to clear all the horses on his inside to take the lead. It’s a big ask with fast horses to his inside and an early turn.