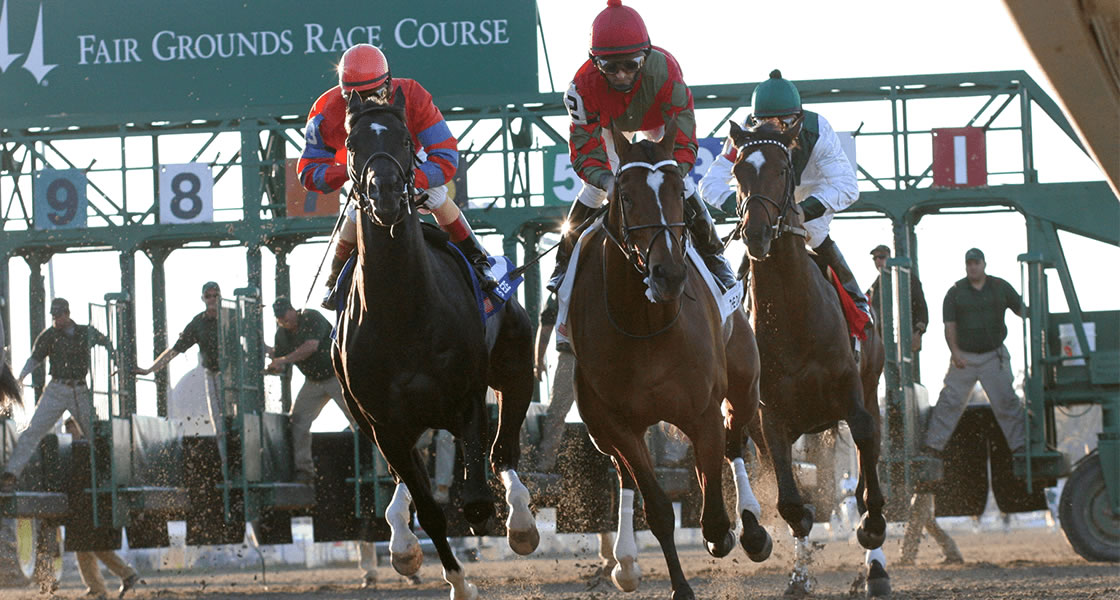 Polar Vortex: are there two more unwelcomed words when paired together? For much of the U.S., it’s going to be too darn cold this weekend to stay outside for long, thanks to an ever so popular Polar Vortex. At least horseplayers trapped inside due to frigid temps can warm up with a hot Saturday of racing at Fair Grounds.

The Louisiana track has six races with prize money of at least $100,000 and a pair with Kentucky Derby and Oaks ramifications. The Risen Star Stakes offers big-time Derby qualifying points to the top four finishers and the Rachel Alexandra for the Oaks. Deep fields and quality horses should provide plenty of chances to find fat tickets.

It’s a long 1 1/8 mile run on turf, which tend to favor horses that come from behind.

LOGICAL MYTH (PP: 6 ML 7/2) has been a Fair Grounds star, winning five of six races at the track. He’s won two in a row and isn’t all that far from winning six straight. Outside of Fair Grounds, he has just two wins in 12 efforts, truly a horse for the course.

FACTOR THIS (PP: 8 ML 3-1) looked bad, really bad in his last two starts, finishing eighth in both. However, those were his fifth and sixth races without a break. Trainer Brad Cox put in him in the barn after his last on December 12th. The last time he got some rest, he came back to win his next race.

DANCETERIA (PP: 4 ML 6-1) started his career as an international horse, racing from one end of the world to the other, Germany to Australia. His last outing was his first in the U.S. and he liked it, coming home second by 3/4s of a length.  Many international travelers put a better effort on the track in their second U.S. start. It wouldn’t take much more to make up less than a length.

DONTBLAMEROCKET (PP: 7 ML 6-1) is anything but a rocket. He’s more coffee, which is for closers. He’s a fan of Fair Grounds with five wins and three thirds in 10 tries. He owns some of the best mid and late pace numbers in the field. If jockey Miguel Mena has him third or fourth coming out of the final turn, he could make things interesting at the wire.

Click here to bet on the Fair Ground Stakes at TVG.com now!

Kentucky Oaks points up for grabs, 50 to the winner, 20 for second, 10 for third and 5 for fourth. Under most circumstance, 50 points is enough to make Oaks reservations.

TRAVEL COLUMN (PP: 8 ML 2-1) ran the top, last race figure getting her second win in three races. She hopped at the start of the lone non-winning effort and still managed to finish third. If she stays on the ground when the gates open, she’s the one to beat.

CHARLIE’S PENNY (PP: 9 ML 9/2) wins every other race, starting with a trip to the winners’ circle in her debut. She won her last, so, she might not hit the wire first here if the every other trend holds. However, she has a win and a third in her two Fair Grounds outings. She lost her footing in the third. She’s another that will benefit with firm footing at the jump.

CLAIRIERE (PP: 1 ML 5/2) got bounced around a little at the start of her last race, maybe costing her the second win in two races. Although, she did have the lead late before finishing behind TRAVEL COLUMN. She’s been in the barn since late November, but her workouts hint at another strong effort.

ZOOM UP (PP: 6 ML 6-1) is undefeated in two races at Fair Grounds since arriving from Kentucky (Churchill/Keeneland). She improved in each of her four starts. If the trend of getting better continues, she could make it three in a row.

Click here to bet on the Rachel Alexandra Stakes at TVG.com now!

Barring injury or disqualification, it’s highly likely you’ll see the winner of this race on the first Saturday of May, running for the Roses in Louisville, Kentucky.

MANDALOUN’s (PP: 11 ML 9/2) has one stat that pops off the page, his trainer wins at 37% with horses running a mile or more for the second time. He finished third in his last race and first attempt at a route for trainer Brad Cox. He gets blinkers today and we expect more, maybe a lot more in route run number two.

MIDNIGHT BOURBON (PP: 6 ML 6-1) ran the highest, last race speed figure in his first race following a three-month rest. It was also his first go-around on the Fair Grounds’ course. He made a huge jump in his second start compared to his debut. This race might not be close if he does the same thing here.

DEFENDER (PP: 9 ML 12-1) got off to a slow start, played some bumper cars and still won his debut, here at Fair Grounds. This is a major step up in class, but that first race is impressive when you consider he got off to a sluggish start, played bumper cars and still won despite the trouble he endured. Many horses would have given up with all those problems in their first race. He’s put some fast workouts on paper since and we know he’s a fighter. It would not be surprising if he pulls off the upset.

Click here to bet on the Risen Star Stakes at TVG.com now!