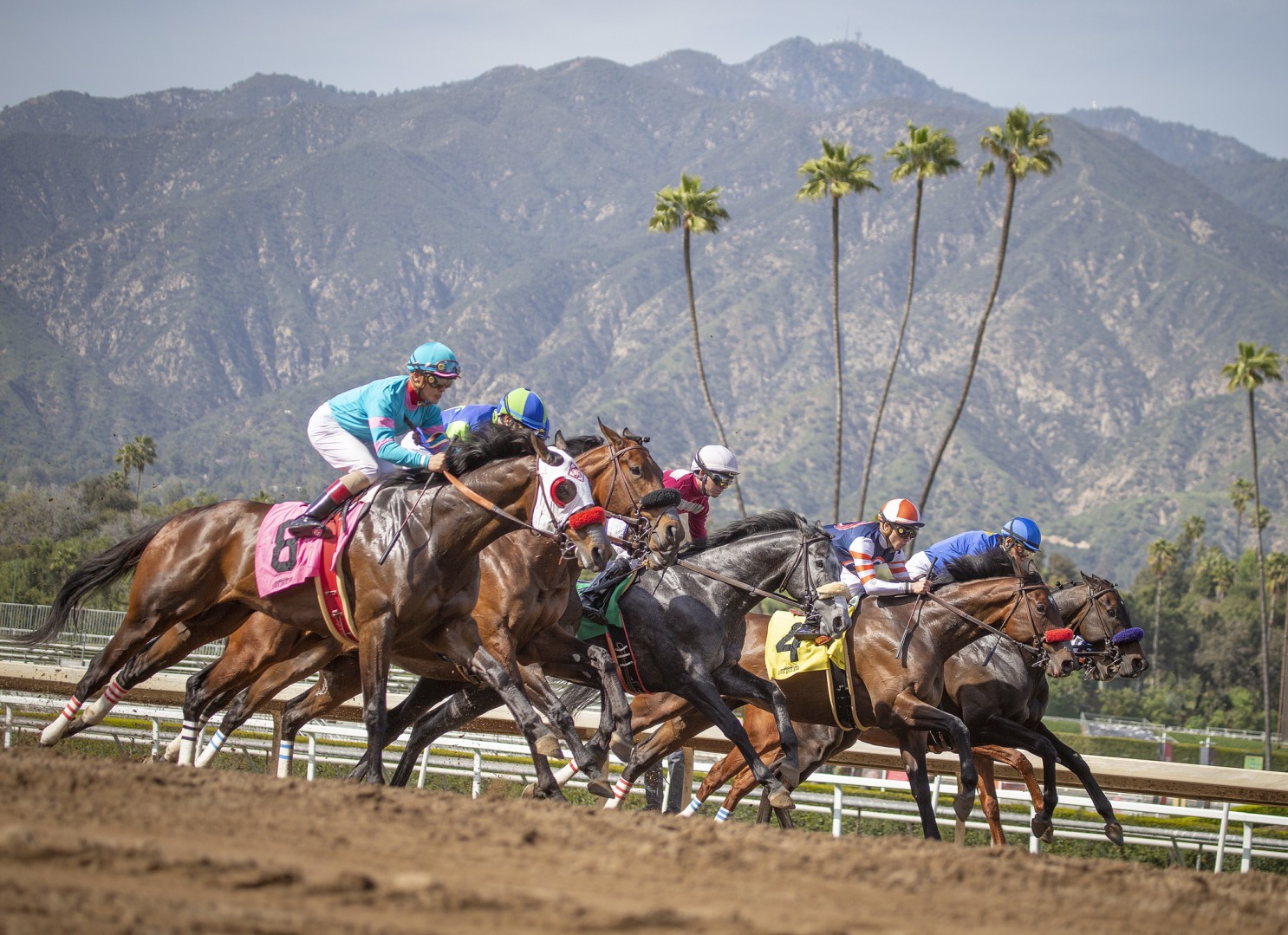 After a semi-holiday-hibernation, horse racing gets 2021 rolling with a big weekend of stakes racing. There are 25 races with jackpots of at least $50,000. We’ll head west and focus on Santa Anita.

A field of nine will race 1 1/16 miles on the main track for the winners’ trophy.

THE CHOSEN VRON (PP: 1 ML 8/5) started his career with a bang and put the horse racing world on notice. He came out of the barn and won his debut with the highest, last race speed figure, by a wide margin, for this crew. Many times, horses improve in their second starts. The same would be more than enough.

POSITIVITY (PP: 7 ML 10-1) tried his luck in the Grade II, Los Alamito Futurity in his last start but bombed out after stumbling at the start. Prior to that, he was three-quarters of a length from being undefeated in his first three efforts. A run back to any of them could be enough at a nice price.

BIG FISH (PP: 3 ML 5-1) is trending in the right directions, improving from race to race after spending some time in the barn. He ran quicker fractions last out and should be at/near his best in his third start following a layoff.

PLAY CHICKEN (PP: 5 ML 4-1) has won two of his first three starts. He’s gotten a little better in each race and similar improvement in race number four would likely result in cashing a top three check.

CLICK HERE TO BET ON THE CALIFORNIA CUP DERBY AT TVG.COM

This a long, 1 1/8 miles on grass with an unusual starting position that could favor outside horses.

WARD ‘N JERRY (PP: 2 ML 4-1) has 13 races over the southern California track with four wins, a second and three thirds. He’s running at the lowest level in his last four starts. He should benefit from the relief in competition.

ACCLIMATE (PP: 8 ML 5/2) ran the highest, last race speed figure, hitting triple-digits. If he can run the same race or maybe even be a little better, he could make easy work of the field.

BRANDONTHEBARTENDER (PP: 1 ML 6-1) has finished in the first three in his last 10 starts. He tends to run mid-pack and then tries hard late, usually crossing the tape third (seven times in his last 10 efforts). He’s probably not going to win but should be in peak form in his third start after a layoff.

HECK YEAH (PP: 7 ML 12-1) is an all or nothing horse. He’s won half of his 12 races and nothing else. He’s won his last pair for trainer Steve Sherman at Golden Gate. If he gets off to a fast start, you’ll know he’s in it to win it. A poor break and his race is probably over.

CLICK HERE TO BET ON THE UNUSUAL HEAT CLASSIC AT TVG.COM

Your horse better be fast if you want him to win this one. Sixteen of the 17 winners at 6 furlongs ran near the front with eight of the 17 going wire to wire.

FASHIONABLY FAST (PP: 3 ML 5/2) has been just that, fast. He’s been on/close to the lead in four of his last five races. He’s dropping in class to his lowest level in his last three starts. He’s won the last four times he ran at this level.

BRICKYARD RIDE (PP: 8 ML 6-1) is another that gets out of the gates in a hurry. He’s won five of his last 10 races in wire to wire fashion. He’s been his best at Santa Anita with three wins and a third in four starts.

TIGRE DI SLUGO (PP: 1 ML 5-1) has tried a fast track four times with three wins and a third. His running style isn’t the best fit for the distance and surface. However, this race has plenty of early speed and he could run them all down if the race is too fast from the jump.

ROYAL TRUMP (PP: 2 ML 15-1) is another horse for the course. He’s hit the board in 10 of 13 at Santa Anita. He’s been in the barn since November 27th.  His recent workouts suggest he’s ready to get back to work.

CLICK HERE TO BET ON THE DON VELPREDO AT TVG.COM