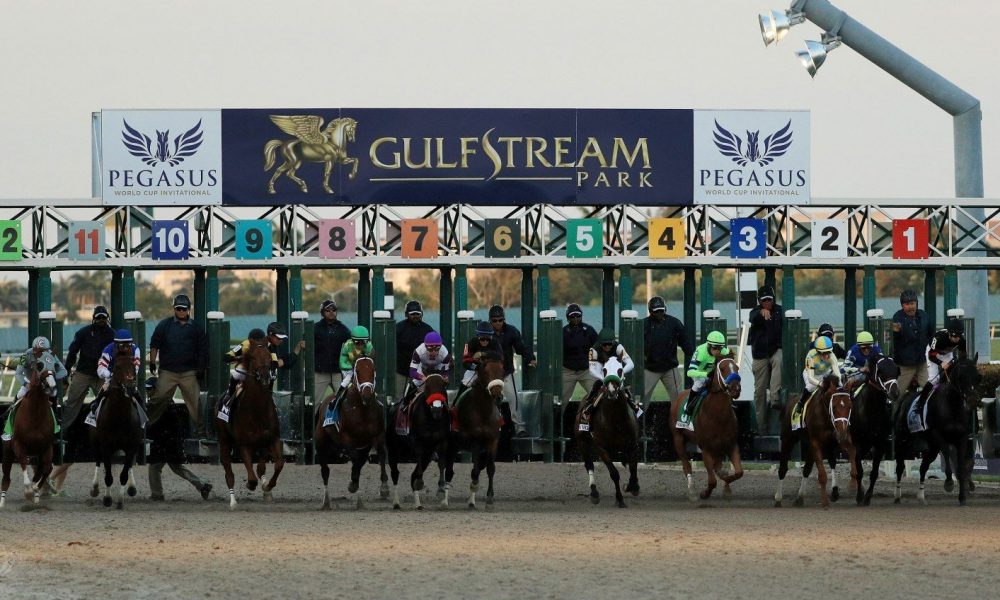 Most of the US will be under the spell of some cold, cold winter weather this weekend. Horseplayers, however, will get a taste of summer and some hot horse racing at Gulfstream Park. It’s supposed to be sunny and in the mid-80s in southeastern Florida this Saturday, a prefect day for the $3 million Pegasus World Cup Invitational.

The Grade I, stakes race is one of two with seven figure jackpots and the last of six races with prize money in excess of $100,000. Be it the $3 million Pegasus in race 12 or the $20,000 maiden claiming race to start the day, the races are highly competitive with deep fields.

Deep fields, marquee races, vulnerable favorites and TV exposure all lead to oversized money pools, which means the potential to hit some big tickets. Gulfstream has some major biases based on the distance and surface of the races. We’ll try to take advantage of them in our selections.

The Grade III, Fred W Hooper Stakes is the first 100k of the day and the fourth on the card. A field of eight will run 1 mile on Gulfstream’s main track. Nearly 60% of the winners at distance and surface are within the first three after a quarter-mile. Early speed clearly has an edge.

PERFORMER (PP: 1 ML 7/5) has four wins in four starts on a fast track. As we mentioned up top, it should be a beautiful day for horse racing. He finished third in his debut and third in his last and won the five in between. He’s got some early speed and should be near the front, possibly all the way around the track.

PHAT MAN (PP: 5 ML 7/2) won’t be one of the first names called by announcer Peter Aiello when the race starts, unless something goes way wrong. He should be near peak form in his third start following nine-months in the barn. Gulfstream should be a welcome place for the third off the bench as he has a win, two seconds and a third in four starts.

SHIVAREE (PP: 3 ML 12-1) won his last race at Tampa Bay Downs. He ran some of his fastest fractions in his fourth trip to the winners’ circle in 15 races. The last time he won, he followed it up with another win.  He’s raced well at Gulfstream with two wins, three seconds and a third in his last six outings.

AVANT GARDE (PP: 6 ML 15-1) is going to be stepping way up in competition; however, his speed numbers say he fits, especially at Gulfstream where he has five wins and a second in six races. It’s kind of hard to overlook that record. He’s been training well since his last race and looks like a good value at 15-1.

CLICK HERE TO BET ON THE FRED W HOOPER STAKES AT TVG.COM

This race is 7 furlongs on the dirt and has some big biases. The horse that wins the race to the quarter pole goes on to win at a robust 30%. Meanwhile, the horse that runs for the rail has won at 23% during the current meet. Our review of the past 300+ races at the distance and surface shows the one and two horses winning at more than 30% combined and close to 40% during the current meet. Inside speed rules.

CINNABUNNY (PP: 2 ML 3-1) earned third place money in her last race as the favorite. She had some problems late in the race, playing bumper cars with other horses in the stretch. Prior to her amusement park antics, she won two in a row and four of six. Expect a big one here as trainer Brad Cox wins at 30% the next time out with beaten favorites.

THISSMYTIME (PP: 4 ML 7/2) is on a two-race win streak, winning by 1 ½ and 11 lengths from the most recent back. This race could be the better than the other two. This will be her third start after a short rest. Her resume suggests the third race in the three-race cycle can be her best.

DREAM MARIE (PP: 1 ML 5-1) gets the coveted rail post draw. You cannot overlook the 24% win rate during the current meet. Her Gulfstream success is another thing you cannot ignore as she has two wins, two seconds and a third in seven efforts. She one ran one of her fastest races last time around the track. Quicker times usually forecast a solid race the next time too.

SOUND MACHINE (PP: 8 ML 8-1) is another horse for the course with a pair of wins and seconds in five races. She’s never far from the front and should be well positioned to close out the race. She has some of the highest, mid-race pace figures in the field. Many races are won and lost in the middle part of the race as it sets the table for “down the stretch they come.”

CLICK HERE TO BET ON THE INSIDE INFORMATION STAKES AT TVG.COM

It’s the headline act. A field of 12 will race 1 1/8 miles on the dirt track for their shot of a $3 million pot of money. This will be the fifth running of the Pegasus. The first four give us clues as to the running style that takes the checkered flag. The quartet of champs headed towards the front right after the gates opened. Two of the eventual winners were second at the first call and the other pair were third. Track announcer Peter Aiello says it’s not a deal killer, but horses are much better off getting out front early.

KNICKS GO (PP: 4 ML 5/2) is a speed ball, jumping to the front of the pack in his last three races and winning by at least 3 ½ lengths. His last race was an impressive wire to wire win in the Grade 1, Breeders’ Cup Dirt Mile against good competition. It was his second consecutive race with the highest, speed figure for this crew.

TAX (PP: 7 ML 5-1) raced on December 12th for the first time since May 2, 2020 and only the second time since finishing ninth in last year’s Pegasus. He had an excuse last time as he almost went to his knees as the race started and never recovered. Owner Randy Hill says he is very confident in his horse and says TAX has put in some of his best training sessions coming into the Pegasus.

SLEEPY EYES TODD (PP: 1 ML 8-1) is a head away from winning five of his last six races. He has a lot of versatility as he’s won on the lead and going from worst to first. If the pace is too slow, jockey Jose Ortiz can push him to the front. If the pace is too fast, he can be patient and chase down the leaders late.  There are three fast horses in the field, expect him to be fourth or fifth early on and to make his move coming out of the final turn.

CODE OF HONOR (PP: 10 ML 9/2) is probably the most consistent horse in the field. He topped 100 speed rating in six of his last 10 starts and was in the mid-to-upper 90s in the other four. Unfortunately, outside posts struggle to win at the distance and surface, probably because they are a disadvantage with an early first turn.  Jockey Tyler Gaffalione will probably try to save ground and head towards the rail right away and then move his way up the pack in the backstretch.

CLICK HERE TO BET ON THE PEGASUS WORLD CUP INV. AT TVG.COM