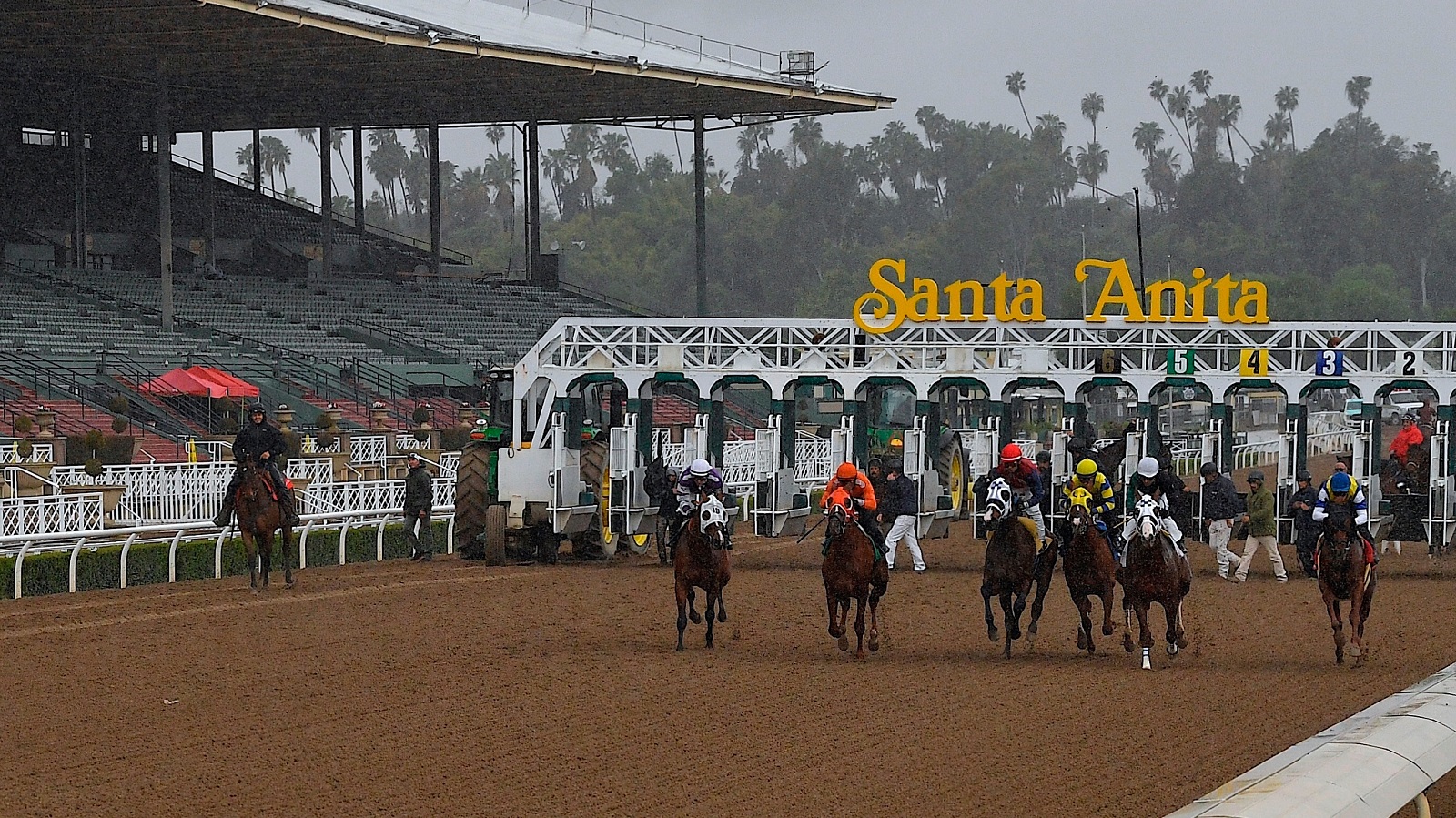 It’s the day after Christmas and all through the land, racehorses were running, fast as they can.

The sunny, southern California track kicks open the gates for their winter meet on Saturday with the gift of top-notch, stakes races for horseplayers looking to spend some of their holiday loot.

Let’s see of we can provide some more Christmas cheer with our Santa Anita picks for races 8, 9 and 10.

Eleven fillies will run 7 furlongs on the main track, and they better be fast. Forty percent of the 52 winners during the fall meet won going wire to wire. That’s a high number.

MERNEITH (PP: 2 ML 4-1) had a rough race in her last, getting bumped at the start and needing to go the widest on the track, but still won. Normally, she’s either on the lead or within a head of the leader. She’s been training super-fast and should be a contender all the way around the track.

HIMIKO (PP: 3 ML 8-1) is on a two-race win streak, including a blowout win in her last, beating the field by 6 ½ lengths with the highest, last race speed figure. The only question is the step up in class.

SECRET KEEPER (PP: 4 ML 6-1) stumbled at the start of her last race and never really had a chance afterwards against a strong field in the Grade II, Raven Run at Keeneland. In her previous three starts, she put some of the best early and mid-pace figures in the books for this group. Minus any trip problems, she’s a serious threat if she runs back to her normal form.

FINITE (PP: 5 ML 7/2) might have the perfect setup for her running style. She likes to run mid-pack and chase down the leaders in the stretch. This race is packed with speed, which could lead to a hot pace, opening the door for off the pace runners.

CLICK HERE TO BET ON THE LA BREA STAKES AT TVG.COM

It’s another race for the ladies to showcase their talent, this time at 1 ¼ miles on the downhill turf course. It’s a quirky race with the downhill start halfway through a sweeping turn. They go from grass to dirt and back to grass as they crossover the main track. The length and oddities will be a challenge for the field of 10 to overcome.

DUOPOLY (PP: 8 ML 4-1) is all or nothing in five races with three wins and two off the board finishes. Here’s the thing, when she gets the lead early, she wins and bombs when she doesn’t. Well, she could be lone speed and, minus the unexpected, should pull the cart here.

SHARING (PP: 9 ML 3-1) is the only millionaire in the race, topping the seven-figure mark in just eight outings. She’ll could be the closest one to DUOPOLY from the gun and has the late legs to run to the wire first, as she’s done in four of seven on grass.

CAPITAL STRUCTURE (PP: 3 ML 4-1) has raced just three times on the east coast, her last two at Belmont and her debut at Monmouth. She has two wins and a third in those three with numbers a touch below the other top-tier contenders. However, it’s doubtful trainer Chad Brown would fly his horse from ocean to ocean if he didn’t think she could compete.

LUCK MONEY (PP: 5 ML 7/2) hit the highest, last race mark on the speed gun in her Halloween run. She’s been in the barn since but has run well fresh in her previous pair of starts following a layoff. Time on the sidelines or not, she’s run well, finishing in the money 10 of 10.

CLICK HERE TO BET ON THE AMERICAN OAKS AT TVG.COM

The Malibu is the headliner. This time, open company gets to run the 7 furlong drag race. We see it as a two-horse race, maybe three.

NASHVILLE (PP: 3 ML 6/5) has smoked the competition in his three races, winning by at least 3 ½ furlongs and never seeing the backside of another. He hasn’t raced since November 7th, when he ran a blazing fast 6 furlongs at Keeneland. This one is a little longer than he’s run before and he faded a little in his last.

CHARLATAN (PP: 4 ML 9/5) is another that’s made easy work of the competition, winning his three starts by at least 5 ¾ lengths. He won the Grade I, Arkansas Derby by six lengths in his last on May 2nd but was disqualified long after the race for a banned substance. His workouts say he’s still fast and will be ready.

INDEPENDENCE HALL (PP: 6 ML 4-1) is the only other that might have a chance at taking the Malibu trophy. He had a little bit of a troubled trip in his last outing and still won. This will be his first go around on Santa Anita but, if his bullet workouts are any indication, he’ll take to the track in a big way.

CLICK HERE TO BET ON THE MALIBU STAKES AT TVG.COM

Fancy even more horse racing tips for this weekend’s action around the world? be sure to visit our sister site Racing Bet to see expert picks for daily horse races down under!