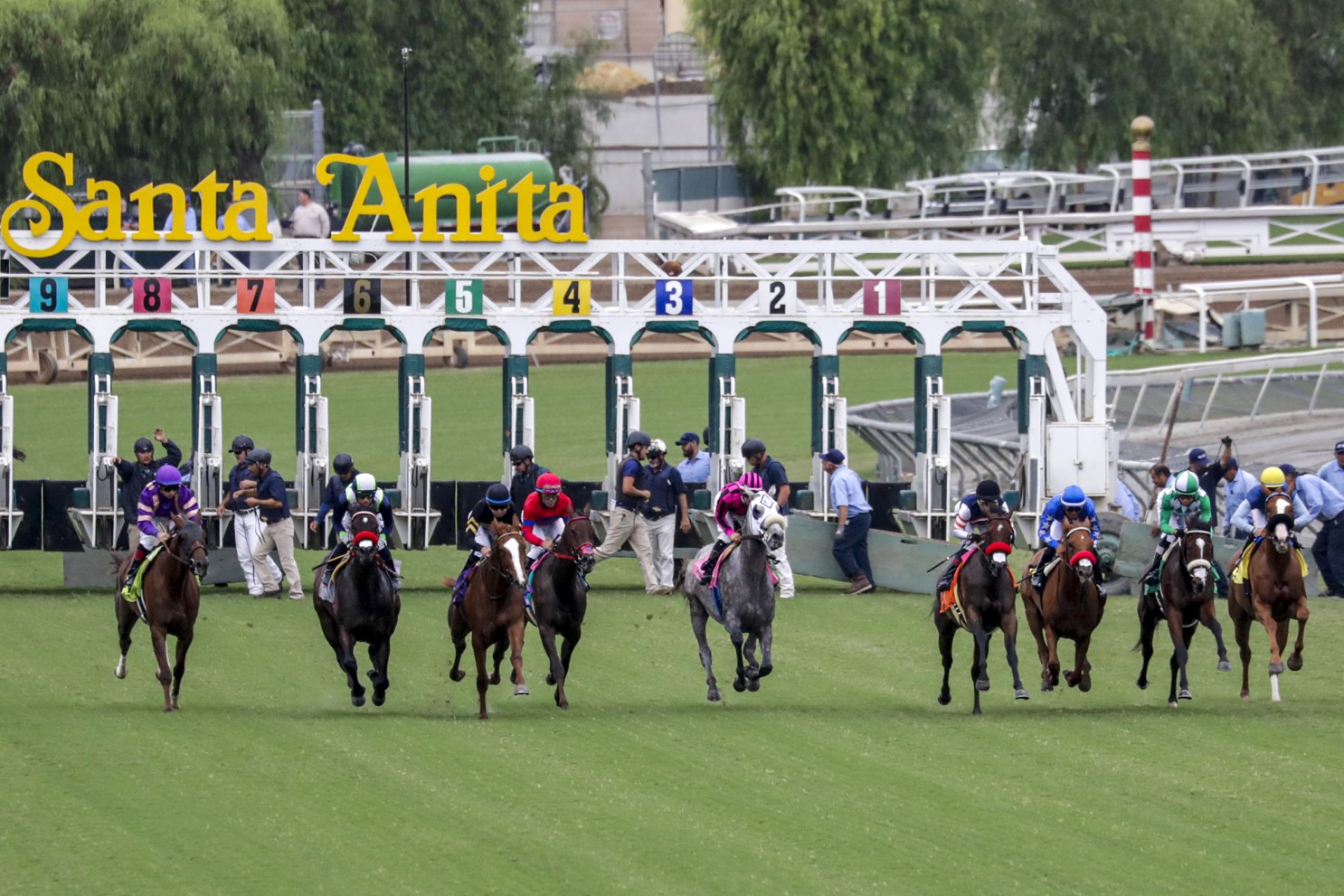 People are going to remember this Memorial Day, probably more so than any other, thanks to the unusual conditions of everyday COVID-19 life. Let’s see if we can ingrain some winning feelings into the memory banks. Twenty years from now, when you are explaining to yet to be born family members and friends what it was like living the lockdown lifestyle, you can toss in an, “Oh, yeah, and I cashed some tickets at Santa Anita that Memorial Day, so it wasn’t all bad.”

Eight fillies and mares (female horses) will drag race 5 ½ furlongs on southern California grass. Three of the first four races at the distance during the current meet have been won by horses that are close to the front from the gun.

We see four horses that are equally matched, any of which take the Monrovia Stakes tierra.

STEALTHEDIAMONDS (PP: 1 ML 5-1) will try to steal this race as she’ll most likely be the one that the others will have to pass. She’s held the early lead in seven of her last eight races and has been no worse than third out of the gate in her last 10. Five-and-a-half furlongs seems to be the perfect distance for her as she has four wins in seven tries, just two wins at any other length.

JOLIE OLIMPICA (PP: 7 ML 8/5) has a second and a win in her first two US races, both at Santa Anita. Prior to that, she was straight blowing out horses in Brazil, starting her career three and zero. She won her U.S. debut at today’s distance/surface despite bobbling at the start and held the lead through the first 6 furlongs in her last at a mile. She’ll be upfront, too.

JUST GRAZED ME (PP: 8 ML 5-1) isn’t a speed horse but has a stellar record at the distance, nonetheless. She has three wins, a second, and a third in six outings. She finished fourth as the public’s top choice in her last start. Her trainer Philip D’Amato rebounds to win at 27% with beaten favorites the next time around the track.

OLEKSANDRA (PP: 2 ML 3-1) owns the highest last race speed figure and is undefeated in two starts at the distance. Overall, she has six wins, a pair of seconds, and a trio of thirds in her career. She’ll likely be at the back of the pack at the start and must work her way past some very good horses that will be in front of her.

WIN: 30% on #1 STEALTHEDIAMONDS and 70% on J# 7 JOLIE OLIMPICA (This breakdown would produce a profit if either horse wins at the stated odds.)

This is a very competitive field of 11. They’ll race one mile on grass for their share of 300 grand. It’s another distance that favors the horses that get off to the best start. So far, six of the nine winners were at/near the front all the way around the track. We’ll see if that holds today as many of the top horses like to make their moves late.

WITHOUT PAROLE (PP: 1 ML 4-1) has the best last race speed figure and the only one to crack 100. He’s lost to some super horses in the highest of the high races. Here he catches a field that lacks a “super star”, never mind four or five of them. Trainer Chad Brown and jockey Irad Ortiz, Jr are a dynamic duo and won two of their last three together.

RAGING BULL (PP: 8 ML 7/2) is all-world trainer Brown’s second horse in the group. He’s finished in-the-money in five of six races at the distance. He finished fourth by just a length-and-a-half in the lone miss.  He hasn’t raced since September, but his training sessions suggest he’ll be ready to run in his return to work.

RIVER BOYNE (PP: 11 ML 4-1) is what they call a horse for the course. He’s won eight of his 13 races at Santa Anita. Ah, but put him anywhere else and he has just one win in 11 efforts. It must be the Santa Anita hay. He’s likely to be forward placed and should be in the sweet spot as they turn for home.

WAR OF WILL (PP: 5 ML 4-1) is making his first start on grass. He made his name winning the 2019 Preakness on dirt. He’s been training like Rocky’s triumphant run up the stairs at the Philadelphia Art Museum. He’d be our top pick on dirt. The question is if he’ll take to the grass this time around.

Elevens wild as 11 ladies will run 1 1/16 miles on the grass in Santa Anita’s 11th race. There aren’t many races at this distance. Therefore, there aren’t any surface/distance advantages that we can try to exploit. It’s basically “may the best horse win!”

ETOILE (PP: 1 ML 5/2) Here’s the reason why. It’s always interesting to see which horse top jockeys choose to ride when they’ve ridden more than one horse in the race. Joel Rosario is one of the better jockeys in the whole wide world (a little Nacho Libre reference). He’s ridden four of the other horses in this crew. For ETOILE, it’s her first race in the U.S. after starting her career in France, so Rosario is picking a horse he never rode before over four that he has ridden. It must be that trainer Chad Brown whispered in the jockey’s ear.

OLLIE’S CANDY (PP: 2 ML 4-1) finished second by a head in her last race with Rosario in the irons. She’s making the classic third start following a layoff, which is a 19% winner for trainer John Sadler. As for the horse, OLLIE’S CANDY has run her best in third starts off the sidelines, no reason why she won’t do the same today.

LADY PRANCEALOT (PP:3 ML 6-1) is fond of racing in Arcadia, California. She has three wins, a second, and a third in eight Santa Anita starts. She finished fourth in the other two. She’s also cashed $144k in three races at the distance with a win and two thirds in three starts.

KEEPER OF THE STARS (PP: 11 ML 8-1) broke a three-race winless streak in her last race with the best speed figure for this crew. She tends to run hot and cold on grass with four wins in nine races and just one second in the other five. Trainer Jonathan Wong wins after a win at 31% and KEEPER OF THE STARS has won two in a row that last two times she broke a non-winning streak.