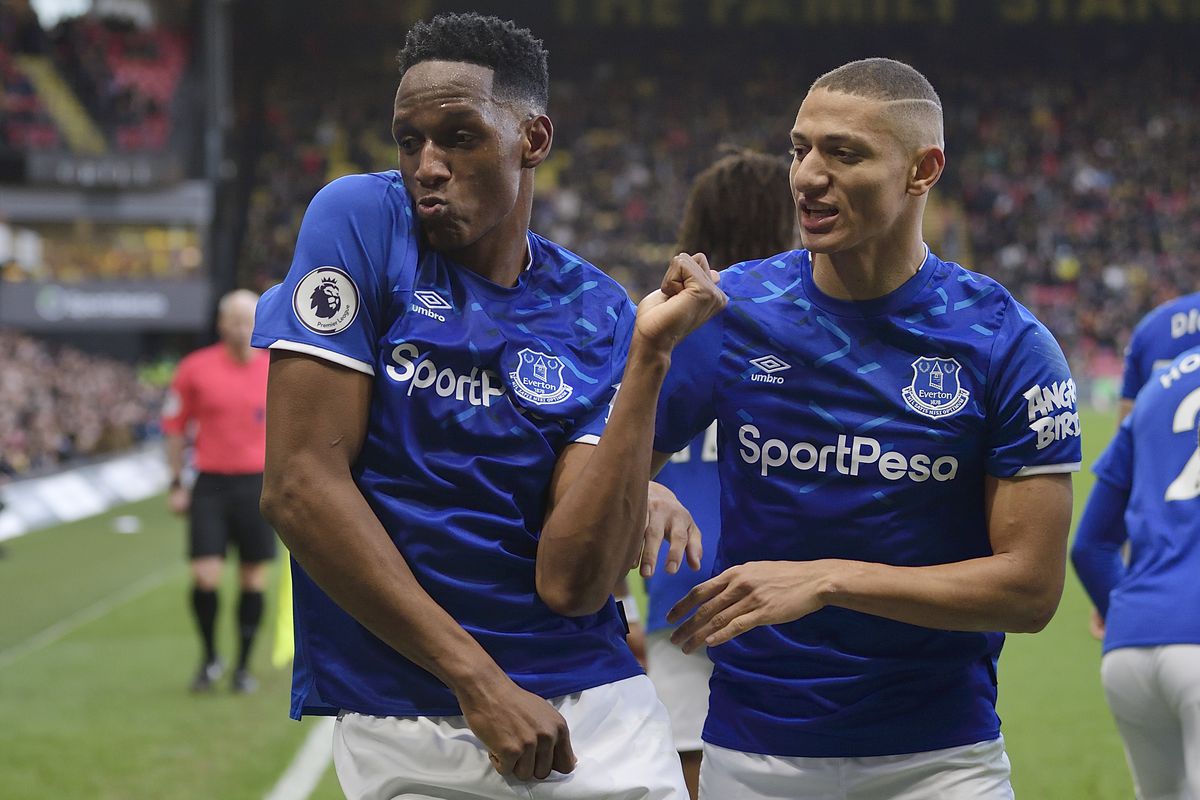 The 2019-20 English Premier League season continues this weekend with Matchday 26! It’s an interesting round of fixtures that has been split into two different weekends, with the first including four games and the second the remaining six. Below, we preview our best picks for the from our favorites matchups in weekend one of two, and wish you all the best of luck if following.

Our best pick for the first weekend for Matchday 26 comes from the opening fixture between Everton and Crystal Palace. This is a big game for both clubs for plenty of reasons and should be excellent viewing for the neutral fan. Kick off is scheduled for 7:30am ET on Saturday from Goodison Park.

Everton come into this off a thrilling 3-2 away win against Watford. The Toffees trailed by two goals through the first 45 minutes, but were able to wrestle the momentum into their favour quickly after the half time break to pile on three goals to secure an unlikely win. The Toffees now hold an impressive 5-4-1 record over their past 10 games and are slowly but surely climbing the league table. If they can continue along this form line, then Europa League qualification certainly isn’t beyond them.

Crystal Palace have been called the giant killers this season and for good reason. However, the bulk of their struggles come against teams they’re supposed to beat. Last time out they were losers at home against Sheffield United, which was their second straight loss and their seventh consecutive match without a win in all competitions. It’s been a real trying period for the Eagles and one that they’ll need to recover from quickly to avoid joining the busy relegation battle.

These two clubs are in complete contrasting form coming into this weekend, however, Palace are usually at their best when they aren’t expected to perform well. They’re infamous for making things difficult for the better clubs in the league and we believe this will be another example of that. We expect this to be an exciting match with plenty of goals.

Another fixture that will be great viewing over the weekend is Manchester City vs West Ham United from 11:30am ET on Sunday at the Etihad. City come into this in some indifferent form that has seemingly eradicated any hope of winning the league title. Meanwhile, the Hammers are having some problems of their own and come into this fixture having gone winless in each of their past five Premier League matches.

Although their squad is one of the most talented in the world, City have seemingly lost a bit of motivation in the league and have shifted their focus to the Champions League. As a result, they’re vulnerable in these types of games and open the door for some value in some opposition markets. Here, we really like the odds on the Hammers hitting the scoresheet, which is more than likely if they can get their counter attack game flowing.

Aston Villa have had an inconsistent season to date and will be one of many teams in a busy relegation battle. They have managed to secure some important points of late, but were pretty disappointing last time out against Bournemouth who are one of their key rivals in the aforementioned battle. Prior their recent loss, Villa were winners over Watford (2-1), which was their second win from their past five games and their seventh for the season as a whole. They come into this in 17th spot on the ladder and just one point clear of the drop zone.

Tottenham Hotspur are one of many members in the so called Big Six to struggle this season. They’ve endured significant changes to their club with key players and their manager departing mid-season, which is always going to make things tough. Despite all of that, the Spurs were able to pull off a huge win at home last time out against Manchester City, which was their second league win in a row. The Spurs come into this fixture sitting in sixth spot on the table and just four points outside the top four.

This is a very important game for both sides for different reasons. Villa will be hoping to return to the winners list to keep them afloat, while the Spurs will try to make it three league wins on the spin to continue their surge towards the top four. For us, we see Tottenham as the far more likely winner from this matchup and believe the odds available are great value.

Arguably the matchup of the round will see Chelsea take on Manchester United at Stamford Bridge. Chelsea had to settle for just the one point in their recent trip to Leicester, finishing up level at 2-2. That result matched their previous result against the Gunners and now the Blues are three games without a win in the league. It’s been a tough period, but they remain inside the top four as it currently stands. Meanwhile, Manchester United also drew their most recent game against the Wolves, and are also now three games without a win in the Premier League. In fact, they’ve won just won and lost three of their past five fixtures, which has seen them drop to ninth on the league table.

This is an interesting matchup considering the form of the two clubs coming in. Neither will have too much confidence from the way they’ve been playing, however, we do believe that Chelsea have been slightly better. They’ve had a really tough schedule and their inexperienced squad was always going to deliver inconsistent results this season. That said, we believe they’re a fantastic chance to win this match on their home deck and will be backing them in to do just that.

This content is intended for entertainment puroses only. For full details and disclosures, visit our Terms section. For more information on licensed sportsbooks – including available states and the best places to play – visit our Reviews section.