Another big week in coming up in the NFL with some massive matchups on the card! The action gets underway on Thursday night with the Broncos hosting the Colts. Check out our preview for the key games as well as betting picks for every game in Week 5 below.

Not sure what the schedulers were thinking when they though a third Broncos prime-time game in the first five weeks was a good idea. Sure there is some increased interest in the team due to the addition of Russel Wilson, but their games have been nothing short of boring through the opening four weeks.

Denver have a 2-2 record and are coming off a loss on the road to Las Vegas on Sunday afternoon. Their offence has been lacklustre and they suffered a massive blow on the weekend with the loss of their first string running back Javonte Williams to a season ending knee injury. They signed Latavius Murray from the Saints practice squad to help fill the void but they will no doubt take some time to adjust their offence here.

The Broncos start as three point favourites at home but I’m leaning the other way here on the back of the news about Williams. I think the Broncos will really struggle to score here, resulting in a close game either way, take the Colts with teh three point headstart.

After dropping their first two games of the season, the Bengals have bounced back to win their last two against the Jets and Dolphins and are now starting to more closely resemble the team that made it to the Super Bowl last season. They have put up 27 points in their last two games while Joe Burrow has started to cook averaging 287 yards nad passing for five touchdowns and no interceptions in those games.

The Ravens look to be one of the real contenders in the AFC through four games. They have a 2-2 record but their two dropped games have been to two of the top teams in the league in Miami and Buffalo. The Ravens are third in the league in total offence, putting up 29.8 points per game on the back of dynamic play from Lamar Jackson.

Think the Ravens hold firm at home here. They start as just three point favourites which indicates the bookmakers think these two teams are evenly matched. I disagree, I think the Ravens are the better side here and happy to take them at the three point line.

After seeing what the Chiefs did to the Buccs on Sunday night football, it’s hard to see this game not being a shootout of epic proportions. Through four games, the Chiefs have put up 32.3 points per game, good for 2nd most in the league while the Raiders have put up 24.0, which has them in the top 10 for offence.

The Raiders are coming off a solid win over the Broncos on Sunday which saw them put up 32 points on the back of a monster game from Josh Jacobs. The star running back had 175 yards from scrimmage and two rushing TDs in the win.

The Chiefs allow the fewest rushing yards in the league this season, but that is likely due to the fact that teams are so happy to pass against them. I think this game will be up and down the field. Back the overs. 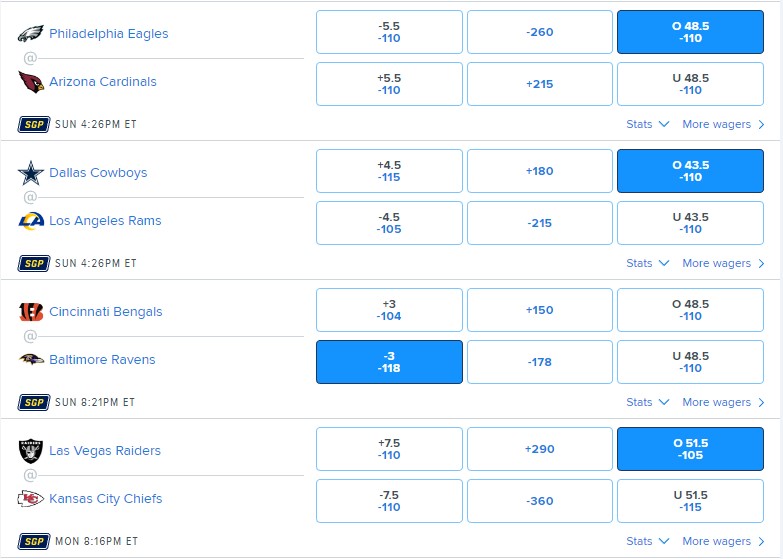