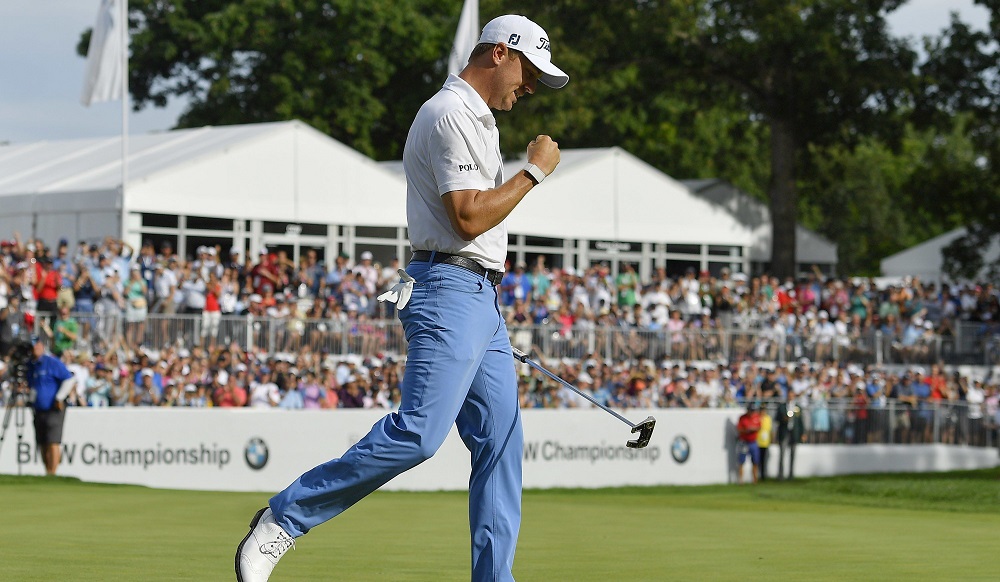 It all comes down to this! The final event of the FedEx Cup playoffs and the PGA Tour season, the Tour Championship, will be played out this week from East Lake Golf Course in Atlanta, Georgia.

In a newly revamped system, the winner of the Tour Championship this weekend will also win the FedEx Cup and the monster $15,000,000 prize that comes with it!

We take a look at the Tour Championship in full and give our betting picks below!

Justin Thomas moved to the top of the FedEx Cup standings and into favouritism for this weekend’s event with a monster performance at the BMW Championship on the weekend. Thomas blitzed the field to finish 25 under par and three shots clear of his nearest opponent.

With the new handicap system, Thomas will now start the Tour Championship at 10 under par while the rest of the top 30 ranked players on the FedEx Cup standings will be given scaled starting handicaps.

Thomas tops the field while the rest will be made up of the top 30 players on the FedEx Cup standings. As you could imagine, it’s a star studded list of the best players of the 2019 PGA Tour season including 19 title winners and nearly all of the current top 10 ranked players in the world.

Patrick Cantlay finished second at the BMW Championship and will start at -8 for the Tour Championship while Brooks Koepka, Patrick Reed and Rory McIlroy round out the top five.

There are some notable exceptions from the top 30 who will miss out on the chance to win the $15 million prize this weekend, most of all, the defending Tour Champion, Tiger Woods. Other major winners who will miss out this week include Shane Lowry, Francesco Molinari, Jordan Spieth, Phil Mickelson, Jason Day, Keegan Bradley, Sergio Garcia, Bubba Watson and Henrik Stenson. 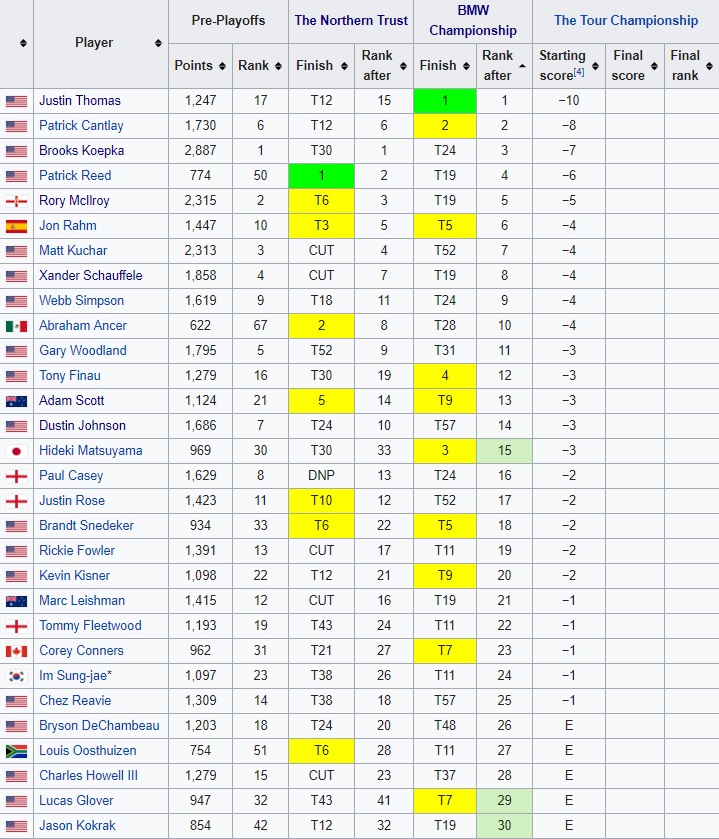 East Lake Golf Course in Atlanta, Georgia has been a regular home of the Tour Championship since the 2004 season. It is a fantastic end to the season as it offers a great all-round test of golf for 30 of the best players in the world.

The course plays as a 7,385 yard, Par 70 which features tough, undulating greens and thick rough. No one type of golfer will dominate this weekend, rather a player who has their complete control of their game as well as strong course management.

A score between -7 and -12 has been successful for the better part of the last decade at the Tour Championship and we expect a similar score to win the tournament this year.

Tough to look much further than the red hot Justin Thomas at the moment. The 25 year old seemed to complete a comeback from an injury plagued season on the weekend at the BMW Championship. He became just the third man alongside Tiger Woods and Phil Mickelson to rack up four scores of 61 or less in PGA Tour events in history with his Round 3 score and looked back to his best as he blitzed the field.

Thomas has some great performances at East Lake in the past, most recently a second place finish to Xander Schauffele in the 2017 Tour Championship which was good enough to earn him the title of FedEx Cup Champion. He will be odds on to become just the second man behind Tiger Woods to win two FedEx Cups this weekend.

We can’t envision anyone starting at lower than -5 coming from the clouds to win the tournament, especially at East Lake Golf Club where it’s incredibly tough to shoot lower than 4 or 5 under. The eventual winner should come from the top five but if you are really hunting some value we suggest the Spaniard Jon Rahm.

Rahm has been lights out in the past two events of the FedEx Cup playoffs, finishing T3 in the Nothern Trust before a T5 finish at the BMW Championship which saw him rise from 10th to 6th in the FedEx Cup standings. He will start at -4 for the Tour Championship this weekend, a margin that is by no means insurmountable.