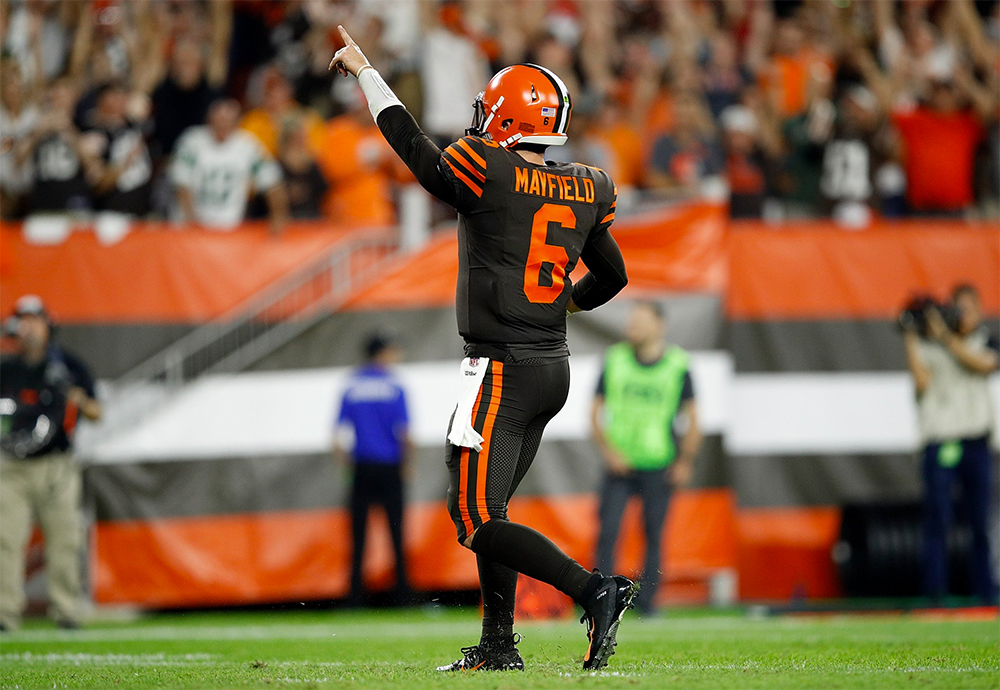 Week 5 in the NFL concludes on Monday night as the Browns travel to San Francisco to take on the undefeated 49ers.

Monday 7th October, 8.15pm ET
For the first time since 2009, the Cleveland Browns are playing on Monday night as they travel to San Francisco. But can the 49ers continue their undefeated streak? Find out below.

Cleveland
The Browns moved atop the AFC North in Week 4 with an impressive 40-25 win over Baltimore. Nick Chubb was the star with 165 yards and 3 scores as the Browns scored 30 second-half points. Beckham was kept in check by the Ravens D but Baker Mayfield enjoyed a nice combination with Jarvis Landry after 8 catches and 167 yards. While on defense, the Browns forced 3 turnovers and conceded just 10 points in the first 3 quarters. They haven’t played on MNF for a long time but with a 3-2 record on the line, watch out for the improving Browns.

San Francisco
The 49ers season is off to the perfect start after winning their first 3 games. They were sloppy against the Steelers in Week 3 with 5 turnovers. But their defence continues to play at a high level. They’re a top 5 defense for rushing yards allowed and that’s the key against Nick Chubb this week. Defensive end Nick Bosa is looking healthy as well and will need to pressure Baker Mayfield. With the Seahawks winning on Thursday night, a 4-0 record would give the 49ers a huge shot at the NFC West title.

Prediction
This is a rare matchup between the Browns and 49ers as they’ve met just four times in the last 16 years. But the overwhelming trend has been the Under (4-0), which also looks to be a good play in this Monday night matchup. The key will be the 49ers defense continuing their impressive record against the run and that’ll help them stop Chubb. Offensively, Jimmy G has been troubled by turnovers so that does limit their scoring potential. The Browns are also showing nice signs defensively and they’ve won both road games in the 2019 season. Look for the Under to salute, which is 5-2 in the 49ers last 7 home games and 5-0 in night games with the Browns involved.