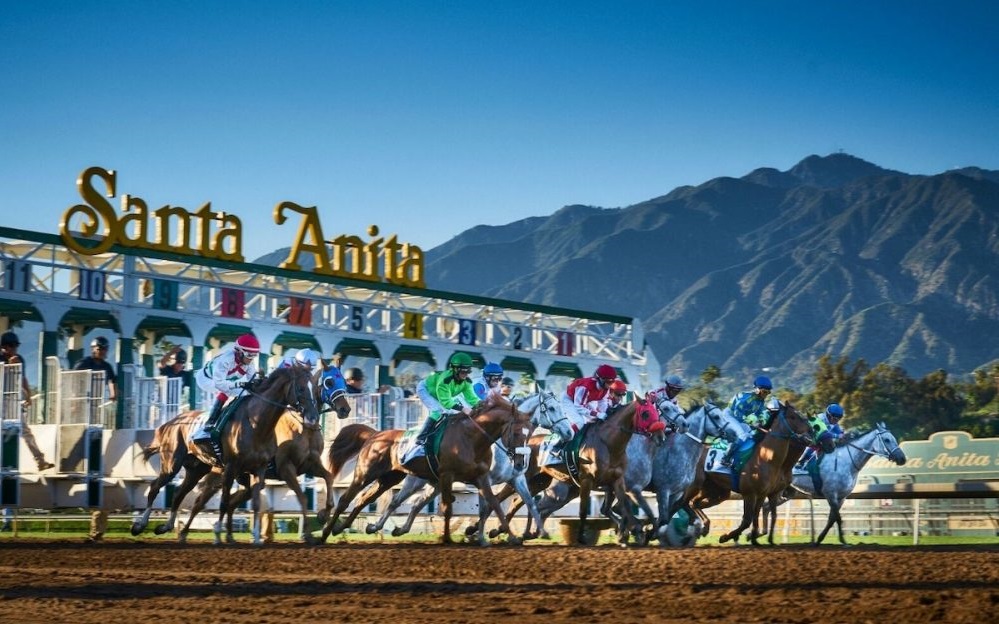 Santa Anita opens its fall meet this weekend, giving out tickets to the 2020 Breeders’ Cup weekend to be held at Keeneland Racetrack on November 6th and 7th. The Southern California track hosts five Breeders’ Cup “win and you are in” Challenge Series races. Saturday’s Santa Anita results will last well beyond the fanless, winners’ circle celebrations.

Race three starts the Breeders’ Cup Bonanza with the Grade II, Chandelier Stakes. A field of five fillies will take on 1 1/16 miles on Santa Anita’s main track. The winner will make her way into the Breeders’ Cup Fillies Juvenile.

PRINCESS NOOR (PP: 1 ML 2/5) should live up to her heavy, heavy pre-race favorite status. She’s raced twice, making both look easy. She improved her racing times in her last race while producing the highest, last race speed figure by a wide, wide margin.

VARDA (PP: 3 ML 8-1) won her debut by 3 ¼ lengths and probably had left some in the tank. She should take a step forward in her second career start. Trainer Bob Baffert follows the maiden score with another win at 23%. Despite the longer odds, she could be the one most likely to pull off the upset.

MISS COSTA RICA (PP: 5 ML 6-1) is another making her second start after winning her first career start. She rated early and then rallied hard late to score a convincing win. Speed is the dominate running style at Santa Anita and a lot in here like to go fast early. She’ll could be the one with the strongest legs late and pass tiring horses.

CLICK HERE TO BET ON THE CHANDELIER STAKES AT TVG.COM

Race 7, the Rodeo Drive Stakes could offer the most betting value of the five Breeders’ Cup qualifying races. The winner will race on to the Breeders’ Cup Filly and Mare Turf. Sevens wild as seven ladies run downhill at the start of 1 ¼ miles on turf in the seventh. It’s a quirky layout that can impact the outcome.

MAXIM RATE (PP: 2 ML 4-1) put the top speed figure on the track in her last start, a narrow win at Del Mar racetrack. She looks to be sharp again as she just posted the fastest of 111 practice runs at 4 furlongs on September 20th.  She likes the track and surface with two wins and two seconds in five Santa Anita outings.

BODHICITTA (PP: 3 ML 5/2) has won four of her last six races and has been at her best in Arcadia, California. In five races, she has three wins and a second. She tried her luck at other tracks 10 times with just one win. A horse for the course.

LADY PRANCEALOT (PP: 6 ML 2-1) has taken on the challenge of the odd downhill start and tight left turn that is a 1 ¼ mile, Santa Anita turf race. She won with a power move in the stretch.  She should be close to her best today in her third start after a layoff, a 19% winner for trainer Richard Baltas.

MUCHO UNUSUAL (PP: 4 ML 5-1) likes Santa Anita cooking as she’s never missed the board in six starts with two wins, a second and three thirds. She came home third in her last start as the bettor’s top choice. Trainer Tim Yakteen rebounds at 22% the next time around the track with beaten favorites.

CLICK HERE TO BET ON THE RODEO DRIVE STAKES AT TVG.COM

The final Breeders’ Cup bid is for the biggest of the Breeders’ Cup races, the Classic. Another small field of five will compete for the Classic ticket in race 10, the G1 Awesome Again Stakes. The field will have a 1 1/16 miles to see if anybody can beat the best racehorse in the world, in our opinion.

MAXIMUM SECURITY’s (PP: 5 ML 3/5) record says it all. He’s failed to hit the finish line first in just one of his 12 starts. He stumbled at the start in the lone miss and still finished second. It’s his third start after a layoff and should be at his best. His last was more than good enough.

IMPROBABLE (PP: 2 ML 8/5) was the favorite in the 2019 Kentucky Derby but was beat convincingly by MAXIMUM SECURITY. He never quite lived up to his promise until recently. Trainer Bob Baffert has him running to his potential with three of his best four races in his last three efforts.

MIDCOURT (PP: 4 ML 6-1) has raced against the top two in his last three, finishing behind in all three. If he’s going to pass either, today could be the day as he loves the distance, winning both tries at 1 1/8 miles.

EXACTA: #2 MAXIMUM SECURITY to win with #2 IMPROBABLE or #4 MIDCOURT to finish second.

CLICK HERE TO BET ON THE AWESOME AGAIN STAKES AT TVG.COM