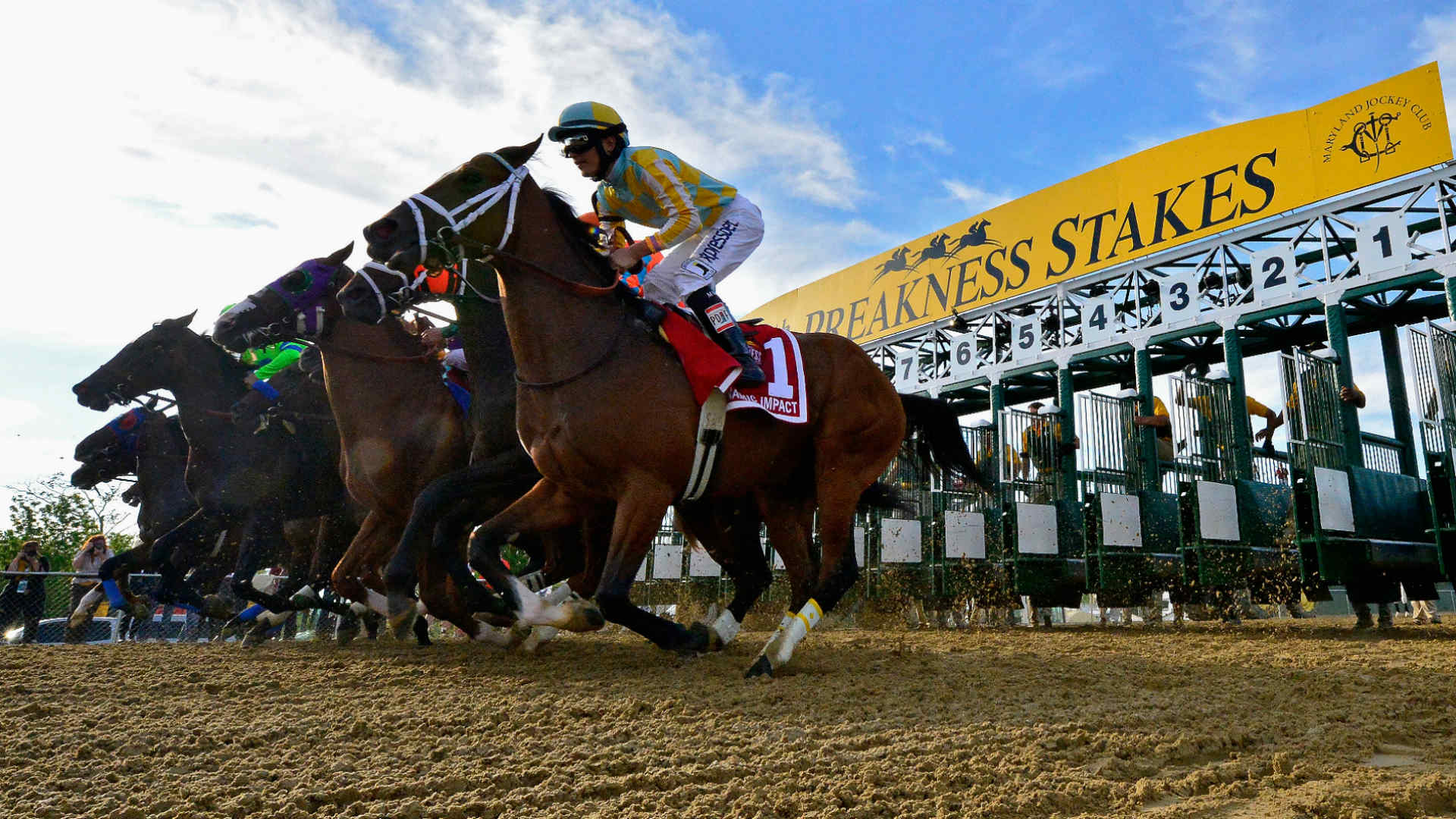 It’s the second leg of Triple Crown racing. It’s Preakness weekend at Pimlico Race Course in Baltimore, Maryland. Friday and Saturday are loaded with stakes races. Friday is punctuated by the Black-Eyed Susan and Saturday by the Preakness.

A field of 14 fillies will race 1 mile on Pimlico’s turf course in The Hilltop Stakes in Race 11. Typically, turf races of a mile or more tend to favor horses that rally from the middle of the pack or back for the win.

SEASONS (PP: 2 ML 8-1) is dropping in class after finishing third on September 20th in the Grade I, Natalma Stakes at Woodbine Race Course in Toronto, Canada. She hasn’t raced since then but has been training with great vigor since, especially in her last two training sessions. This will be her three-year-old debut, many horses make big leaps from their two-year old to three-year-old campaigns.

BUBBLES ON ICE (PP: 5 ML 7/2) is making her second start in the United States after beginning her career with four races in Ireland. Frequently, international horses don’t show their best in their first US race, but not BUBBLES ON ICE, she won on her first try. Odds are she improves in her second US start.

PROPER ATTIRE (PP: 4 ML 30-1) could be a live longshot. She could be lone speed and be in front the pack from beginning to end without needing to run too fast. She will be making her first start on turf. To get a sense of how she might like grass, horseplayers might look at a horse’s record on a wet track, putting more weight on muddy than sloppy. PROPER ATTIRE won her lone outing on a muddy track in a wire to wire win. That’s what she’ll try to do here.

MIA MARTINA (PP: 6 ML 5-1) tried to run on the dirt for the first time in four races in her last effort. It didn’t go well. Trainer Graham Motion made and easy decision to put his horse back on grass after she stopped racing on dirt. She’s moving down the class ladder to a level that should be a good fit for her.

CLICK HERE TO BET ON THE HILLTOP STAKES AT TVG.COM

This is a long race, 1 3/16 miles on the main track for 11 entrants. Since moving to the distance in 2012, it’s been a barbell race with speed winning six of nine and closers winning the other three. The middle of the pack is the one place you probably don’t want your horse to be for the first half-mile.

FEARLESS (PP: 2 ML 9/5) ran the highest, last race speed figure and should probably be better in this spot. It will be his second start after a short stint on the bench. His history says he’ll upgrade his performance in the second race of a two-race cycle.

CORDMAKER (PP: 8 ML 15-1) won his last race going wire to wire. He switched styles in the victory after failing to score in his previous nine races as a stalker or closer. To be fair, the first three-quarters of a mile were on the slow side, but he ran a blowout late pace number to close the show.

HARPERS FIRST RIDE (PP: 7 ML 10-1) has won half of his races, collecting the winners’ check in 10 of 20 starts. His record on a fast track is a little better, scoring nine wins in 16 starts. He’s the defending champion for this race and last year’s run was his career best in his only race at Pimlico. If he can rewind and rerun the same race, it’s the same result.

LAST JUDGEMENT (PP: 11 ML 4-1) was the public’s top choice in his last race, finishing third in the Grade III, Ghostzapper Stakes. Trainer Michael Maker rebounds and wins at 20% the next time around the track with beaten favorites. His horse should be near the front all the way around the track with one of the better frontrunning jockeys, Jose Ortiz piloting.

CLICK HERE TO BET ON THE PIMLICO SERIES STAKES AT TVG.COM

This is the fillies’ version of the Preakness. Some of the best, three-year-old female horses running 1 1/8 miles on Pimlico’s dirt track. It’s a two-turn race that’s a little more than one lap as is starts in the front stretch. Six of the last 10 fillies to wear the Black-Eyed Susans came from the back of the pack with the other four closer to the front.

ADVENTURING (PP: 9 ML 4-1) has only raced four times with two wins, a second and third. She’s improved from race to race to race and won her last two, including the highest, last race speed figure. She’s gotten a little bit of rest since her last outing and has been preparing well for trainer Brad Cox. The trainer is teamed up with jockey Florent Geroux. Cox and Geroux win at 31% together and generate a positive return on investment (ROI), which is surprising considering both at the top of their professions.

BEAUTIFUL GIFT (PP: 10 ML 9/5) finished second by a ½ length in the Santa Anita Oaks as the 4/5 favorite. Her pedigree scores for the distance and surface are amongst the best for this group. She’s performed well in competitive races at the highest level for her age-group and should be in peak form in her third start off the sidelines.

ARMY WIFE (PP: 1 ML 8-1) is another that should be near top form making her third start following a long layoff. She fits the most common profile of a Black-Eyed Susan winner as she tends to save her best strides for the end. In her last start she ran into some traffic and sometimes closers from the one post can have troubled trips. If jockey Joel Rosario can keep her path clean, her late kick could give her a chance at the wire.

THE GRASS IS BLUE (PP: 8 ML 6-1) has one of if not the best jockey and trainer tandems. The combo of Irad Ortiz, Jr and Chad Brown win at 32%. Brown is taking blinkers off of THE GRASS IS BLUE, which is a 40% winning angle for the trainer.

CLICK HERE TO BET ON THE BLACK EYED SUSAN STAKES AT TVG.COM