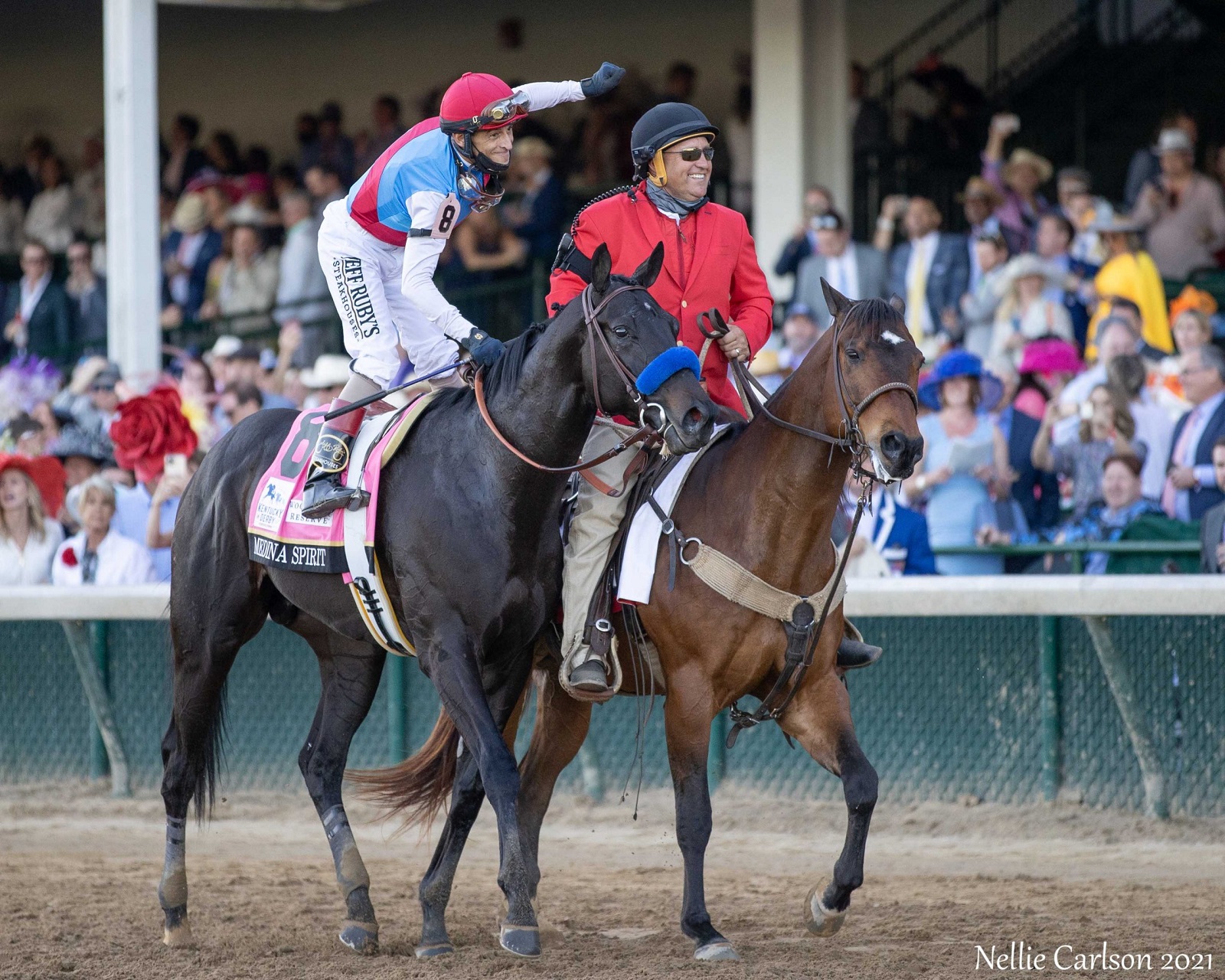 Sir Walter Scott’s “Oh what a tangled web we weave” could be the catchphrase for this Saturday’s Preakness Stakes intrigue. A lot has happened since Preakness favorite MEDINA SPIRIT won the Kentucky Derby. In case you don’t know, the horse tested positive for the anti-inflammatory steroid betamethasone.

It’s not a banned substance, but horses can only have a small amount or none in their system on race day, depending on state-by-state rules. Trainer Bob Baffert furthered the tangling by announcing MEDINA SPIRIT was “never” treated with betamethasone. Later on, his camp said, oh yeah, we were treating MEDINA SPIRIT with an anti-fungal ointment called Otomax, which contains betamethasone. Apparently, the horse had a rash.

Although the beleaguered Baffert won’t be at Pimlico in Baltimore, Maryland for the Preakness, two of his horses will be, MEDINA SPIRIT and CONCERT TOUR, the two favorites. If either win, one must wonder what sort of Twitter outrage it would cause?

We’ll get to our Preakness picks in a minute, but first we’ll untangle the two races preceding the headliner.

It’s a short race, 6 furlongs, that’s long on horses, 11 of them. As of this keystroke, there have been 39 races at the distance on the main track. Getting going out of the gate is the most direct way to the winners’ circle as 26 of the 39 winners were considered early speed with 17 leading from start to finish.

LAKI (PP: 1 ML 6-1) has won his last two starts at Pimlico, both at 6 furlongs. In his last start, he took the checkered flag by riding shotgun for the first half of the race before taking over for good. In the Pimlico win before that, he was fifth of six out of the box and rallied home despite checking in the middle of the race.

BREEZY GUST (PP: 7 ML 6-1) is fast as fast. He’s been first or second after the first-quarter mile in 10 straight outings. The pair of times he wasn’t first was by a combined 1 ½ lengths. Minus anything unexpected, you’ll definitely see him on/near the lead while you watch on your TV/computer/smartphone screen. In his last start, he jumped out to the lead as the chalk but gave it up late finishing third. Trainer Daniel Velazquez bounces back at 30% with beaten favorites in their next start.

YODEL E. A. WHO (PP: 2 ML 8-1) has won from the front, middle and back. He hasn’t gone three races in a row without a win since May 2020. He must be due because he finished third and fourth in his last two, respectively. Despite collecting show dough, he ran up the highest, last race speed figure and could be better in his third after a layoff.

STRIKE POWER (PP: 5 ML 7/2) is another that should challenge for the leadership role out of the box. He has some of the best fractions, best pedigree scores and will likely be one of the favorites at post-time; however, he is inconsistent. At his best, he wins by a length or two. At his worst, he’s in the mix until fading hard at the end.

A competitive field of eight will race 1 1/16 miles on the turf course. It’s a two-turn race that has favored closers in the early part of the current meet. That’s not unusual for a grass race; however, track conditions are usually set like greens in a golf major, as fast as possible. So don’t be too surprised to see the majority of Pimlico’s Saturday winners close to the front all the way around the track.

KURAMATA (PP: 3 ML 6-1) debuted in Great Britain on a synthetic, all-weather track. He must have been injured as he went on the shelf for 14-months before re-emerging on Tampa Bay Downs turf on February 21st, winning his maiden. He followed it up with another grass win at Aqueduct on April second, running away from the pack. The four-year-old is improving and expect him to be better here too.

SACRED LIFE (PP: 5 ML 7/5) is dropping ever so slightly in class, from a Grade I to a Grade II, after putting the top, last race speed figure on the track at Keeneland. The drop and top speed figure has been a sneaky good handicapping angle and is one you should add to your toolbox. The thing is, he could be even better in his second start after a long layoff.

ENGLISH BEE (PP: 2 ML 8-1) consistently puts some of the best stats on paper compared to the rest. He has one of the strongest late kicks in this group but tends to fall behind too much at the start and then runs out of runway before the wire. Jockey Joel Rosario, one of the best, needs to put him a little closer to the front than usual to fully benefit from ENGLISH BEE’s late legs.

Certainly, the horse racing world hopes the second leg of the Triple Crown has all of the on-track drama possible, (not including a spill) but is all quiet on the failed test front in the aftermath of the Preakness. Kentucky Derby winner MEDINA SPIRIT and nine others will run 1 3/16 miles across Pimlico’s dirt track.

Much like recent Kentucky Derbies, the Preakness has rewarded early/tactical speed with nine wins in the last 10 Preakness Stakes.

It could be trainer Bob Baffert one and two and some side-eyes afterwards.

MEDINA SPIRIT (PP: 3 ML 9/5) has finished first (3x) or second (3x) in each of his six starts. If you watched the Kentucky Derby two weeks ago, then you heard about 100 times that he’s never been passed. The funny thing is that he doesn’t pass many either. Usually, where he starts, he finishes. He has a good chance to be close to the front when the gates open again.

CONCERT TOUR (PP: 10 ML 5/2) is the other Bob Baffert horse. Many thought he would be the one of the Kentucky Derby favorites after he made easy work of the Grade II, Rebel Stakes at Oaklawn Park, but was removed from consideration after faltering in the Arkansas Derby. He is a young, lightly raced horse that needed a rest. He’ll challenge for the lead early and could go wire to wire if he gets it.

CROWDED TRADE (PP: 4 ML 10-1) did something that only MEDINA SPIRIT achieved in his Kentucky Derby victory, hit triple-digits on the speed gun in his Gotham Stakes win. The pair are the only ones in the field to hit the milestone. He followed it up with a loser score and third in the Wood Memorial but didn’t get the best of trips. He’s the most likely to pull off he upset at long odds with a clean race.

MIDNIGHT BOURBON (PP: 5 ML 5-1) raced better in the Kentucky Derby than it looks on paper. He got off to a rough start, playing bumper cars with some of his starting gate neighbors, and then had to race four-wide through the turns. But he still managed to finish sixth. Normally, he out of the box in the first three and has the stamina to stay there.