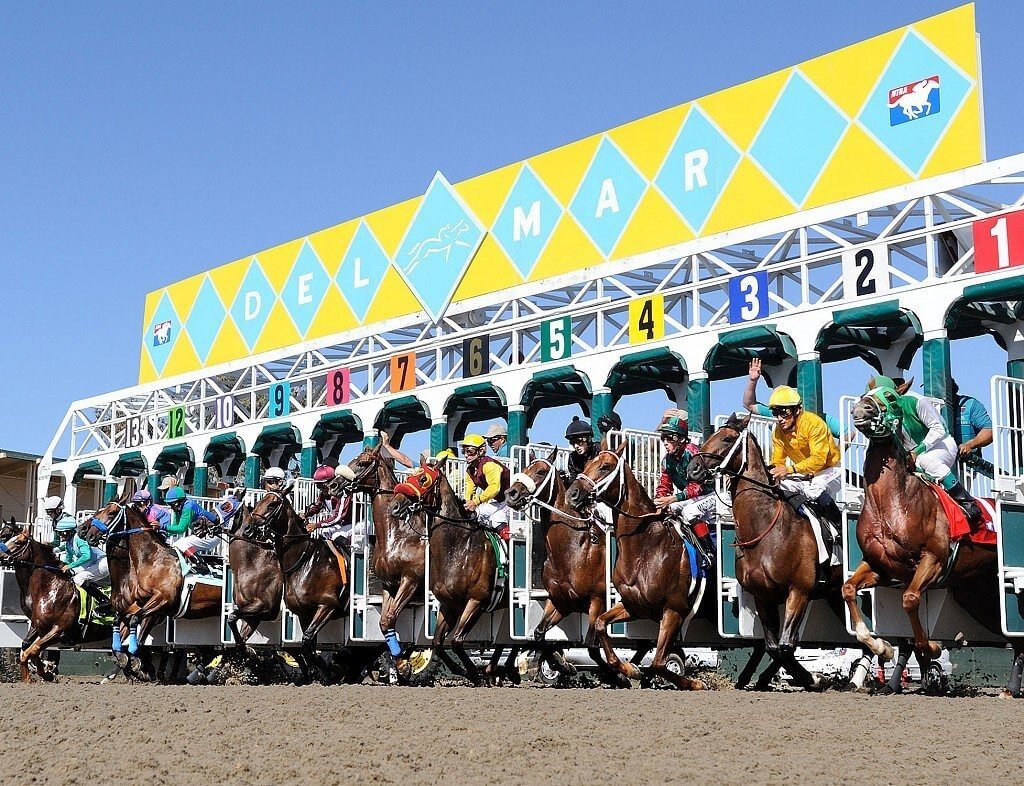 It’s a jam-packed day of racing from Del Mar this Saturday and as usual, we have you covered with a full preview and betting picks for some of the key races on the card below!

Del Mar’s busy afternoon or evening, depending on where you live, of stakes racing gets started in the third race with the $100,000, Grade III, Green Flash Handicap. Don’t wander off for a snack or bathroom break, this one will be over in less than a minute. A field of seven will sprint 5 furlongs on Del Mar’s turf course.

BAJA SUR (PP: 3) finished third by a neck in his last race, behind winner SPARKY VILLE (PP: 1). The third-place finish was his first race since June 6th. If you dig into BAJA’s past performances, you’ll see he typically takes a big step forward in his second starts off the bench, winning the last two handily. We expect similar improvement today, which should be enough to make up a neck.

MIKES TIZNOW (PP: 8) has run 5 furlongs on the turf five time, he won four of them and finished third in the other. He’ll be on the lead and the one all the others need to pass to make it to the winners’ circle. More often than not, fast horses win at the distance/surface.

CHAOS THEORY (PP: 7) is likely to be one of the favorites. He’ll be making his first start since June 14th at Churchill Downs and his first start for trainer John Sadler. Sadler wins at 13% in the first race with a new horse and CHAOS THEORY won his last first start off the bench. However, prior to that, he finished second, and fourth twice in his first start after a layoff.

SPARKY VILLE (PP: 1), as we mentioned up top, beat our top choice in his last outing. It was his first go at Del Mar, and could be a horse for the course, but he’s failed to win two races in a row. He followed up his previous wins with a second, third and sixth, see a pattern?

CLICK HERE TO BET ON THE GREEN FLASH HANDICAP AT TVG.COM

Although she’s only raced twice, SECRET KEEPER (PP: 2) looks like she could be the fastest of them all to the finish line. She’s not the type that takes the lead from the start, at least not yet. She hugged the frontrunners in her first two outings and then just smoked past the field to win both of her races. She put in the top, last race speed figure in her last start and figure to be better today.

HARVEST MOON (PP: 3) tried her luck on grass in her debut and finished a respectable third. Trainer Simon Callaghan decided to switch her to dirt in her second start and worked like a charm, she won. MOON followed it up with another win on dirt, making her two and zero after the surface swap. She wasn’t challenged in her last race, so we can overlook slower fractions compared to her pervious start, but she’ll need to step it back up today to win.

PROVOCATION (PP: 6) came out of the barn on fire, winning her debut “handily” as the 3/5 favorite. She was also the favorite in her second start versus SECRET KEEPER, but finished a disappointing third. This will be her first try at 1 mile or more for trainer Bob Baffert. The trainer wins at an amazing 39% with horses that follow a sprint-sprint-route cycle. Today is the route in the three race series.

CLICK HERE TO BET ON THE TORREY PINES STAKES AT TVG.COM

Hardcore horseplayers and casual fans shouldn’t miss a chance to see one of the best horses in the world when he races. In our opinion, MAXIMUM SECURITY is the best racehorse on the planet right now and he headlines the 10th race at Del Mar Park Saturday evening, the Pacific Classic.

Past favorites have done well in recent Pacific Classics, five of the last seven to wear the crown were the public’s choice when the gates opened. Meanwhile, six of the seven raced in the top three after the first quarter mile.

MAXIMUM SECURITY (PP: 5) will be the favorite and near the front from gate to wire. The four-year-old has hit the tape first in 10 of his 11 starts, including his 2019 Kentucky disqualification. He stumbled at the start of his only non-winning effort. This will be his second start after winning the $20 Million Saudi Cup, trainer Bob Baffert wins second starts after a layoff at 30%.

MIDCOURT (PP: 1) almost got the better of MAXIMUM SECURITY when they met in the San Diego Handicap on July 25th. He had the lead with just a few steps to go but could not hold on. Today’s task could be more difficult as the Pacific Classic is 3/16 mile longer than the San Diego Handicap. Nonetheless, MIDCOURT likes racing ad Del Mar with two wins and a second in three tries.

HIGHER POWER (PP: 2) is the defending champ! He won the Pacific Classic last year with the best race of his career. He rode shotgun to the leader for the first quarter-mile, jockey Flavien Prat, who rides today, stepped on the gas and HIGHER POWER ran away from the field by 5 ¼ lengths.

MIRINAQUE (PP: 3) is a wildcard, coming from Argentina where he won four of five on a fast track. He’s been running at the highest level in South America and could surprise if his form carries to the US.

CLICK HERE TO BET ON THE PACIFIC CLASSIC AT TVG.COM