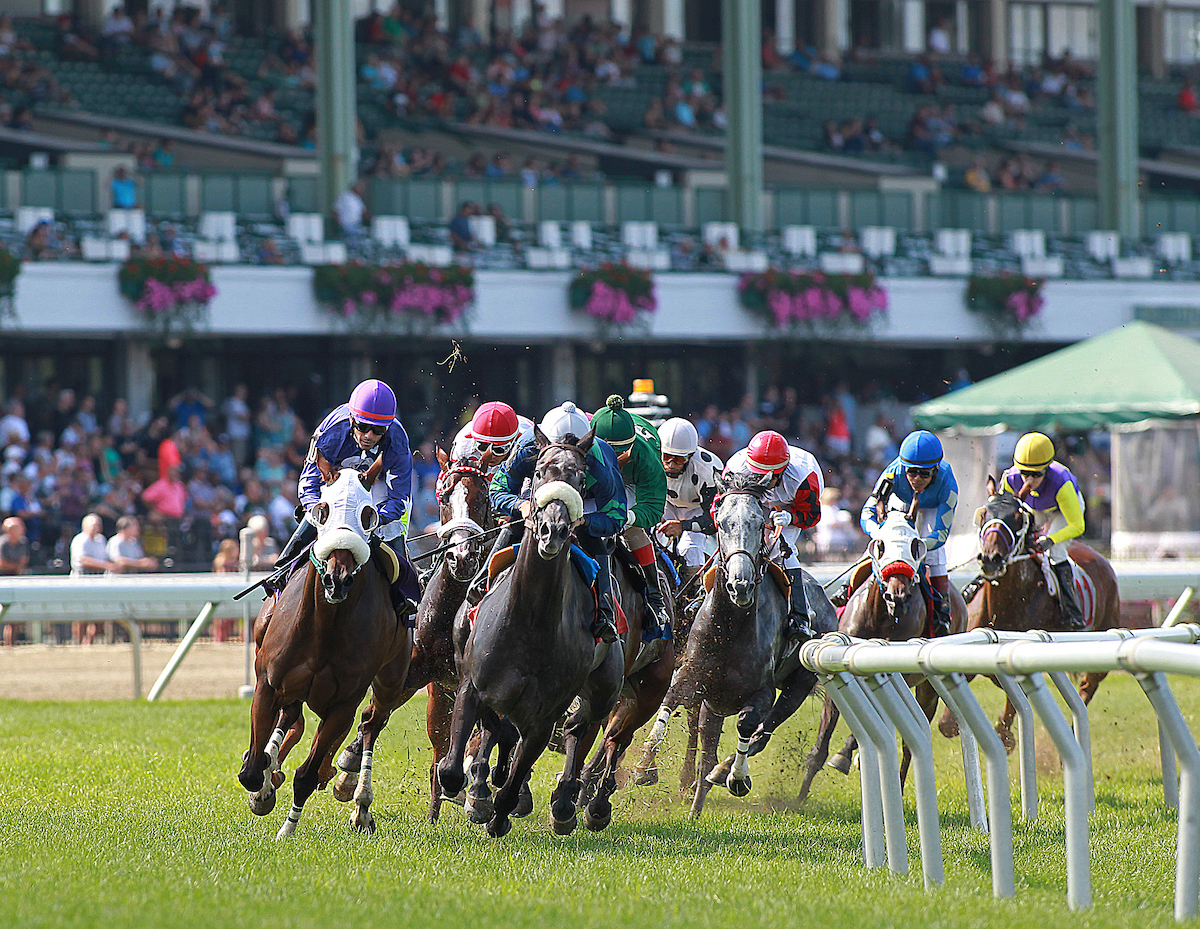 It’s a sort of quiet Saturday of big money Stakes races with only nine on the calendar with prize money of at least $100,000. However, there are a couple of races with major consequences.

We take a look at the key races from both Monmouth Park and Saratoga below.

Race 10 at Monmouth Park is the Pegasus Stakes and is the last qualifying race for the 2020 Kentucky Derby.

It’s a win or go home race for JESUS’ TEAM (PP: 8) and PNUEMATIC (PP: 5) needs to finish no worse than second to make the cut. JESUS’ TEAM sits at 29th on the leaderboard with 10 points. He’ll need the winner’s 20 to squeeze into 21st place. Now, only the top 20 run for the roses, but number 13 in points, SWISS SKYDIVER (more on her later), will most likely run in the Kentucky Oaks, opening a spot for number 21.

PNUEMATIC needs to collect just one point to move past FINNICK THE FIERCE into the coveted 21st position. If JESUS’ TEAM managed to hit the tape first, PNUEMATIC would need to be the runner up.

ARKAAN (PP: 6) could have the most potential in the field. He’s only raced twice; so, we don’t know his ceiling. However, we do know he hasn’t been challenged, winning by 6 and 3 ½ lengths, from most recent back. He improved a lot from race one to race two. If he takes the same step forward today, he could make three straight laughers.

AS SEEN ON TV: (PP: 7) is the only horse in the field to achieve a speed rating of 100 or more. He did it twice. However, after hitting triple-digits, he struggled in his next two starts. He’s been on the sidelines since a terrible effort in his last outing but has been training like the 100 reading horse.  If he can run to his back-class, it should be enough against this crew.

PNEUMATIC (PP: 5) better hope that third place is good enough to make the Derby. In his last start, he finished a well beaten fourth in the Belmont Stakes, but he wasn’t competitive at any point in the race. He’s found it difficult to beat really good to great horses to the finish line. Aside from ARKAAN’s potential and AS SEEN ON TV’s best, there are no other really good to great horses in this field.

JESUS’ TEAM (PP: 8), pronounced heysus’ team, recorded the highest, last race speed figure in an uneven effort. He looked tired at the end of the Haskell Stakes, wiggling his way down the stretch. He’ll need to straighten out his line late to find the winners’ circle.

BET NOW: CLICK HERE TO BET ON THE PEGASUS STAKES AT TVG.COM

Saratoga Racetrack hosts the two other biggest races of the day, starting in the eight; the $500,000 Saratoga Derby Invitational. A field of eight will run 1 3/16 miles on the Spa’s turf course. Unfortunately for value seeking horseplayers, it looks like the 7/5 morning line favorite will be hard to beat.

DECORATED INVADER (PP: 2) has won five of his seven starts and is just ¾ lengths from six of seven. He finished fourth in the other and may have won both if the races were just a little longer. He won’t run out of room today in his longest outing yet.

NO WORD (PP: 3 ML 15-1) won his last race and trainer Todd Pletcher follows a win with another at 22%. He’s put in some good training sessions since his last race, including a bullet in his last work on August 8th. He has a chance to run his best race ever in his third start following a layoff; a live longshot.

DOEMSTIC SPENDING (PP: 4 ML 6-1) has only hit the track three times and has been a better horse in each of them. He’s making his third start following four months in the barn after his debut. Trainer Chad Brown hits round threes at 20%.

COLONEL LIAM (PP: 6 ML 7/2) tried grass for the first time in his last start and won with his best speed rating by a decent margin. Experience says most horses do better in their second grass go, a 20% winning angle for Pletcher.

BET NOW: CLICK HERE TO BET ON THE SARATOGA DERBY INV. AT TVG.COM

Although there isn’t much value, once again, in Saratoga’s 9th race, the Grade I, Alabama Stakes for fillies, it is a win and you are in race for the Breeders’ Cup Distaff.

SWISS SKYDIVER (PP: 5 ML 1-1) won’t be even money at post-time, she’ll be 3/5, maybe lower. Right now, she’s probably the best three-year-old female horse in the land and quite possibly the world. Barring anything unexpected, she should handle this crew.

CRYSTAL BALL (PP: 3 ML 9/2) has the best chance to top SKYDIVER, in our view. She’s probably going to challenge the favorite right out of the gate with the duo racing one/two, maybe all the way around the track. The risk is one or the other goes too fast early on and doesn’t have the legs to hold up at the end.

SPICE IS NICE (PP: 2 ML 3-1) was well bet two races ago when she faced off with SWISS SKYDIVER. In fact, she was the public’s second choice compared to the fifth choice for SKYDIVER. The $1 million horse came back to win her next race after a few months on the sidelines. Normally, we’d expect improvement from a horse in its second start after a layoff; however, her performance fell off badly against SKYDIVER in her only other round two.

BET NOW: CLICK HERE TO BET ON THE ALABAMA STAKES AT TVG.COM