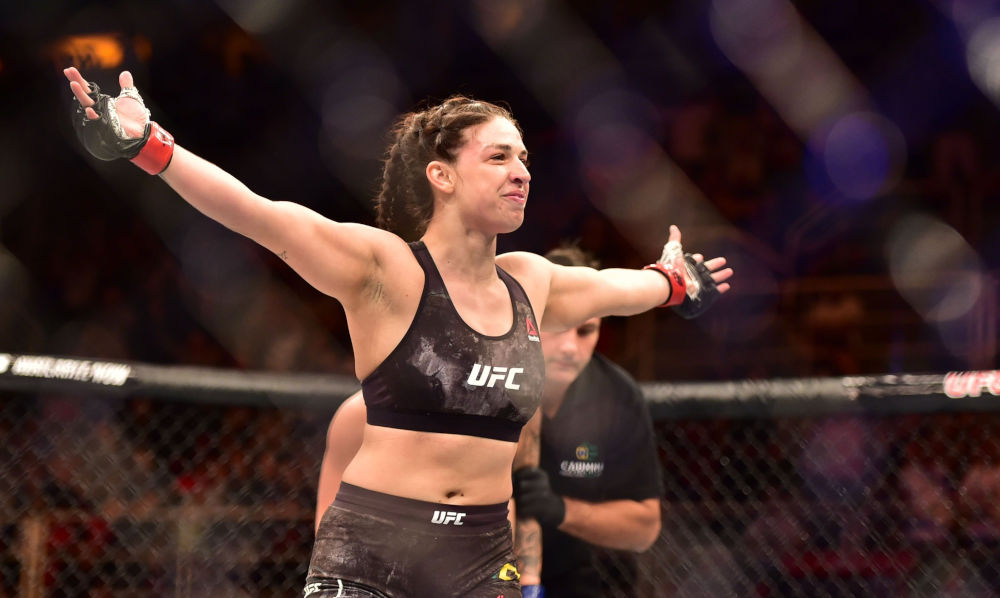 The UFC Apex Center in Las Vegas, Nevada hosts yet another UFC Fight Night. Headlining the card are fellow Brazilians Mackenzie Dern and Marina Rodriguez, in a typical striker vs grappler match up. In the co-main, Randy Brown takes on Jared Gooden and Women’s Flyweight prospects Sabina Mazo and Mariya Agapova clash in what should be an entertaining bout.

This week we turn our attention to the main event and a three-leg undercard parlay to try to eke out some value.

Since losing her first professional MMA bout, Mackenzie Dern has been on a tear, winning four straight, three by way of first round submission. Similarly, Marina Rodriguez bounced back from her sole professional defeat, a razor close split decision to former champion Carla Esparza last year with back-to-back wins. Most recently having an impressive win over hot prospect Amanda Ribas, by the way of a devastating striking clinic.

Usually, I always favour the grappler in these types of match ups but the odds about Rodriguez are too good to pass up. Dern has been all or nothing in her MMA career. She has one to two dominant rounds to start where often if she gets the fight to the ground and from there it is game over. However, Dern has shown that she is extremely hittable and has a tendency to wear out as the fights go long, which is not uncommon for grapplers as the lactic acid builds up in their muscles.

Simply put if Dern doesn’t secure an early takedown and submission, it is Rodriguez’s fight to lose. She has a high output of 4.89 significant strikes a minute and has twice landed over 100 significant strikes in a bout. She will punish a tiring Dern as the fight wears on and likely secures a stoppage in the latter rounds. Back Rodriguez to stay out of danger early and put on a clinic thereafter.

Alexandr Romanov is the largest favourite on the card and yet I still think he is value as I do not see him losing this fight. His opponent Jared Vanderaa prefers to take the fight to the mat yet is still incredibly easy to takedown himself. Romanov is an undefeated Heavyweight prospect who I have very high hopes for. Expect him to take Vanderaa down and pound him out from the top or wrap up a limb within the opening minutes.

Damon Jackson is an excitement machine. He hasn’t seen the judges’ scorecards since 2016 and although this fight may break that streak, I can only see him coming out on top. Jackson is a takedown and submission threat and his opponent Charles Rosa keeps failing to stop the takedowns. It is a simple formula to pick wrestlers against Rosa but it works and so I will do it again here. Jackson spends most of this fight in suffocating top control and while Rosa may even survive the 15 minutes, he won’t get the decision go his way.

Steve Garcia meets Charles Ontiveros in a clash likely to last minutes not rounds. I must admit I am nervous to add this fight into a multi as Ontiveros will charge forward and may just connect with a bomb. Odds are though that Garcia steamrolls a fragile Ontiveros in the opening exchanges and therefore Garcia rounds out my multi.