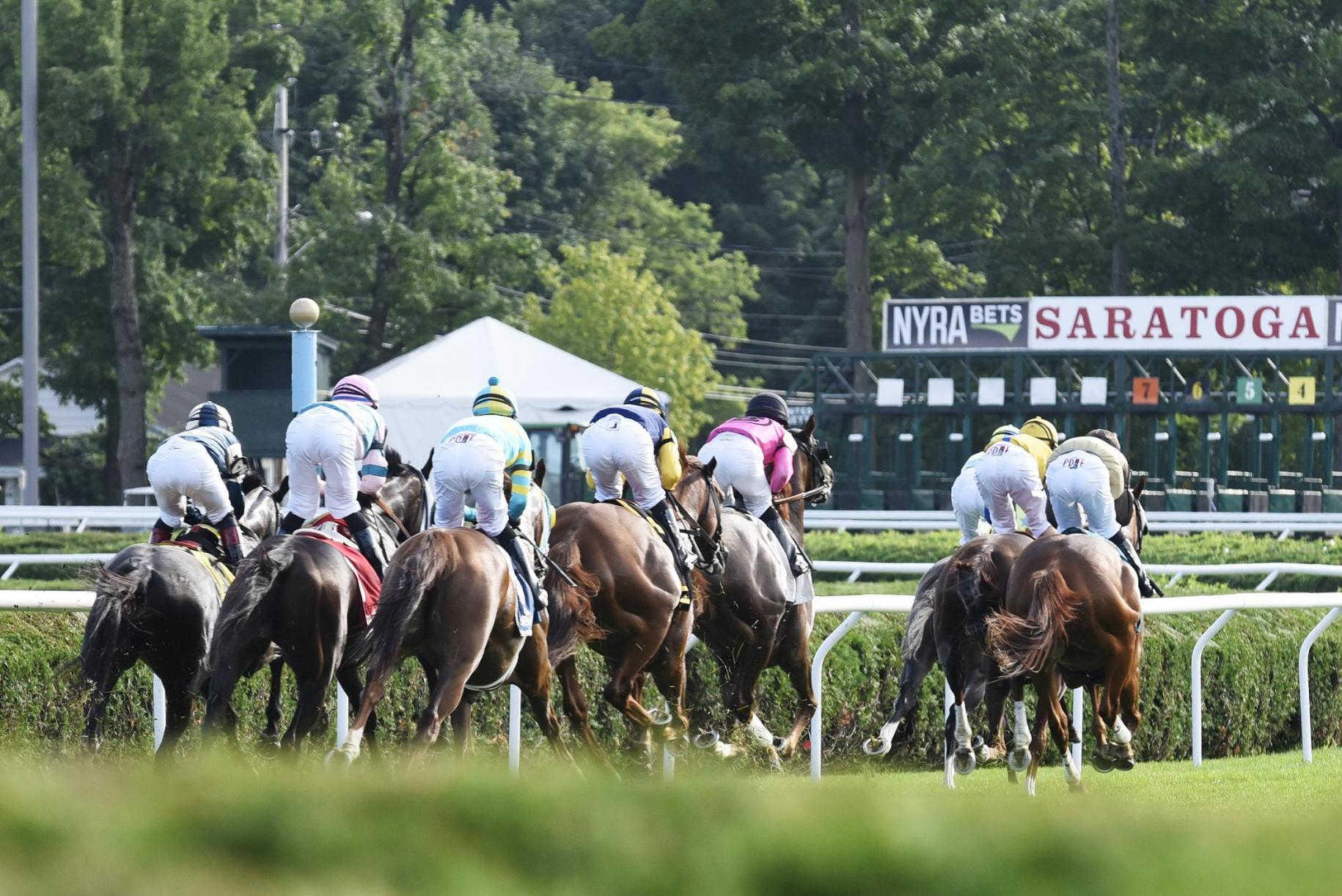 It must be summer at Saratoga. It seems like we are always at “The Spa” for big-time Saturday races. This weekend is no exception. Saratoga hosts a handful of stakes affairs beginning in race six and ending in the tenth. Three of the five are Grade I efforts and two boast $1 million in prize money. We’ll focus on the trio of Grade 1s.

A competitive field of eight fillies will take on Saratoga’s main course for 7 furlongs. Horses that get off to a fast start have a small edge over stalkers/closer as speed has won nine of 16 at the distance on dirt.

ALWAYS CARINA (PP: 5 ML 3-1) was heavily favored at Belmont Park to win her last race but faltered late and finished second to ZAAJEL (PP: 3 ML 8-1). Since, she’s moved to Saratoga and has been working out brilliantly. Expect her to bounce back here as trainer Chad Brown wins at 27% the next time out with beaten favorite.

SEARCH RESULTS (PP: 7 ML 5/2) is likely to get bet down in this spot. We’d be surprised if she goes to post at 5/2 odds. She is just a neck away from winning five of five career starts. A recent bullet workout (the fastest of the day at 5 furlongs) say she’s ready.

SOUPER SENSATIONAL (PP: 2 ML 6-1) put the highest, last race speed figure on the track in her last race. If she can run the same race, she could have the same result. However, her score increased by so much that we are concerned she could regress a touch here.

BELLA SOFIA (PP: 8 ML 6-1) could be the fastest out of the gates at a distance and surface that favors speed-burners. She has two blowout wins and a second by a length in three races. She had some early issues in the non-winning effort. Lookout if she gets off to a clean start and easy lead.

CLICK HERE TO BET ON THE TEST STAKES AT TVG.COM

A full field of 10 runners turn twice for this 1 3/16 race on turf. It’s an unusual distance without much Saratoga history. There’s no telling if speedsters, closers or something in between has the advantage. A handful of international horses add to the mystery and challenge of handicapping the Saratoga Derby.

BOLSHOI BALLET (PP: 6 ML 2-1) won his US debut without jockey Ryan Moore asking for more late.  No doubt this horse has more than he showed last out and should be better in his second US start. He’s won all three races when catching a good track. He might really like it when it’s firm.

SECRET PROTECTOR (PP: 7 ML 6-1) has been facing tough company in Great Britain, only finishing behind MOHAAFETH and ROMAN EMPIRE in his last pair of outings. As good as BOLSHOI BALLET proved to be last out, MOHAAFETH is probably better, maybe by a lot.

CADILLAC (PP: 4 ML 4-1) is another that might find fast and hard US turf courses to his liking as his best races were on a good surface. He too has faced tough competition, running a well beaten fifth to one of the best turf horses in the world, ST MARK’S BASILICA.

KING FURY (PP: 11 ML 10-1) is giving grass a go for the first time. However, he’s dropped some hints that he could like the surface switch. His lone trip on slop was his biggest win and his workouts on Saratoga turf have been solid. He’s likely to go off at a good price and will be running hard late.

CLICK HERE TO BET ON THE SARATOGA DERBY INV. STAKES AT TVG.COM

A skinny field with two heavy favorites in the battle for the marque race of the day. Getting off to a fast start, especially with an early turn has won the bulk of the 1 1/8 miles races on the main course.

KNICKS GO (PP: 4 ML 6/5) is the fastest horse in this group of five. He could get out to an easy lead and run comfortable fractions. If he has the lead in the stretch, he wins.

MAXFIELD (PP: 5 ML 8/5) is on the opposite end of the early speed spectrum. He could break last and need to chase them all down in the end. He’s been above to complete the worst to first task before but not against a dragster like KNICKS GO.

SWISS SKYDIVER (PP: 3 ML 6-1) takes on the boys once again. She did get the better of AUTHENTIC in 2020’s Preakness stakes in her career best effort, but she was handled rather easily by ART COLLECTOR in her other effort versus males. Jockey Irad Ortiz, Jr. will have to be careful not to get into a duel with KNICKS GO at the start.

SILVER STATE (PP: 2 ML 4-1) has won six races in a row, including his last against KNICKS GO. However, KNICKS GO was coming back to the US from Saudi Arabia and had company on the lead in that spot. This race looks to have a different pace setup.

Exacta: #4 KNICKS GO to win and #3 SWISS SKYDIVER or #5 MAXFILED to finish second.

CLICK HERE TO BET ON THE WHITNEY STAKES AT TVG.COM