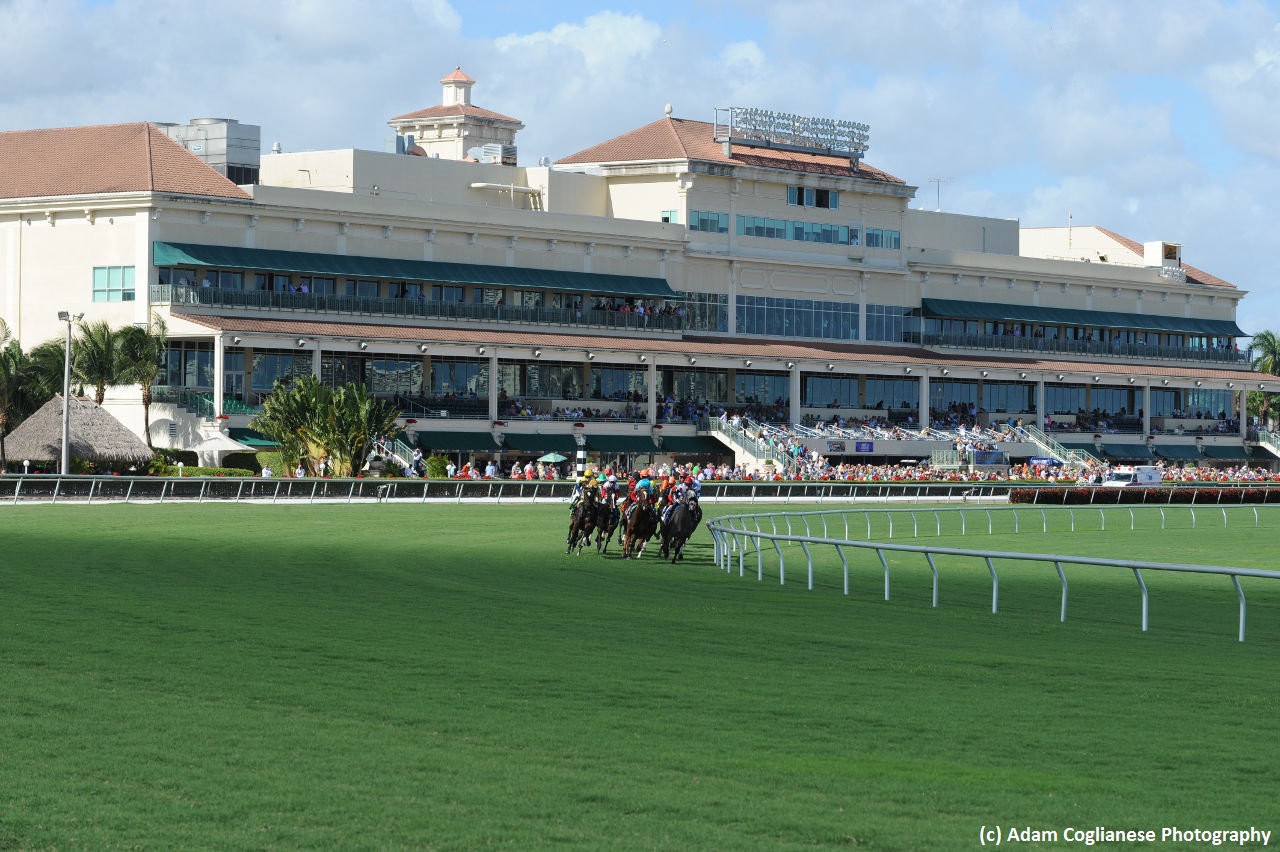 Stakes races pop off all over the country like Fourth of July fireworks this weekend. US Races with $100,000 in prize money start on Friday and run through Monday. Festivities kickoff in the heartland on Friday night at Prairie Meadows in Iowa and end on Monday afternoon at Los Alamitos racecourse. All in all, 23 stakes races are on the schedule for the long Independence Day weekend.

Our focus is on Saturday, July 3rd with two races at Belmont Park in New York and another at Gulfstream Park in south Florida.

A field of seven fillies and mares will race 1 mile on the outer turf course. Meet to date, there have been 29 races at the distance and surface with stalkers and closers having the decided advantage. The race starts in an angled chute and takes a hard turn left onto the turf course. Jockey Jose Ortiz says getting into the right position is the key at the start with the sharp turn.

PIEDI BIANCHI (PP: 4 ML 12-1) is dropping in class and is making her third start after a layoff. The six-year-old mare improved sharply in race two compared to race one. That’s exactly what horseplayers want to see. She should be close to the lead all the way around the track and could be tough to pass if she improves in round three.

VIADERA (PP: 9 ML 4/5) started her career in Ireland with one race in Great Britain. Her last four races where on this side of the Atlantic, winning her last three. She hasn’t run since November, bust has been training very well. This is the weakest field she’s faced in the US.

HONEY CAKE (PP: 1 ML 4-1) is another international invader, making her first start in the United States. She’s been hot and cold, winning four of eight starts but nothing else. She appears to prefer a softer track, something that’s common overseas but not so much in the US.

PRINCESS GRACE (PP: 3 ML 3-1) has raced four times and is a 1/2 length from winning all of them. She’s making her four-year-old debut in her first race since mid-November. She put two bullets on paper leading up to this spot, signaling she’s ready.

CLICK HERE TO BET ON THE PERFECT STING STAKES AT TVG.COM

This is one of two Saturday, Breeders’ Cup Challenge Series win and you are in races. The Suburban winner gets a free pass into the Breeder’s Cup Classic. To get to the Breeders’ Cup will take require another winning trip on an odd-shaped race. This one is 1 ¼ miles on the main track and starts a touch before the middle of the first turn.

MORETTI (PP: 1 MK 10-1) has a win, place and show in three races at the distance. He finished third, a long way behind the winner in his last. He could be better today in his second start after nearly a year in the barn. Trainer Todd Pletcher wins second starts at 21%.

HAPPY SAVER (PP: 6 ML 6/5) is undefeated in five races, including three for three at Belmont Park. Like many others here, he is making his second start off the break. His resume says he’ll be much better in race two off the sidelines.

MUSTIC GUIDE (PP: 4 ML 1-1) has finished in the first three in each of his eight starts with 4 wins. Two seconds and two thirds. He hasn’t raced since winning a $12 million outing in Saudi Arabia. He’s been training lights out and will try to live up to his odds.

MAX PLAYER (PP: 5 ML 10-1) has faced the toughest competition for this field. He hasn’t raced all that well recently, but if he can run back to his early 2020 level, he could make his way into the Breeders’ Cup Classic.

SLICK HERE TO BET ON THE SUBARBAN STAKES AT TVG.COM

This is the other win and you are in Saturday spot, the champ goes into the Breeders’ Cup Filly and Mare Sprint. They’ll be running 7 furlongs on Gulfstream Park’s main track with no weird turns. Early speed types have the edge, winning 52 of the 78 runs at the distance with 22 of the 52 leading from gate to wire.

ESTILO TALENTOSO (PP: 1 ML 5/2) ran the top last race speed figure at Belmont Park. Don’t worry about her taking her form to Florida from New York. She’s raced six times at Gulfstream with two wins, three seconds and a third. She’s also 100% at the distance with a win, five seconds and a third in seven efforts.

THISSMYTIME (PP: 3 ML 6-1) is another that’s fared well at Gulfstream. She’s tried the main track seven times with three wins, two seconds and a third. She hasn’t raced since late January, but some fast, recent workouts suggest she’ll be ready to run at Gulfstream again.

LAURA’S LIGHT (PP: 6 ML 7/2) will likely be one the fastest out of the chute. She’s been first or second after the first quarter-mile in nine of her last 10 starts. This will be only her second start on dirt. She won her last on a sloppy track in a big way. She’ll need to repeat it on a fast track or hope for rain.

HALLAWLLAH (PP: 7 ML 20-1) is a live longshot, maybe. She’s been off the track since late February but smoked it in her return. She ran her career best speed figure in her last. She’s has a trio of other second starts after a layoff. She improved in all three round twos off the bench.

CLICK HERE TO BET ON THE PRINCESS ROONEY INVITATIONAL STAKES AT TVG.COM