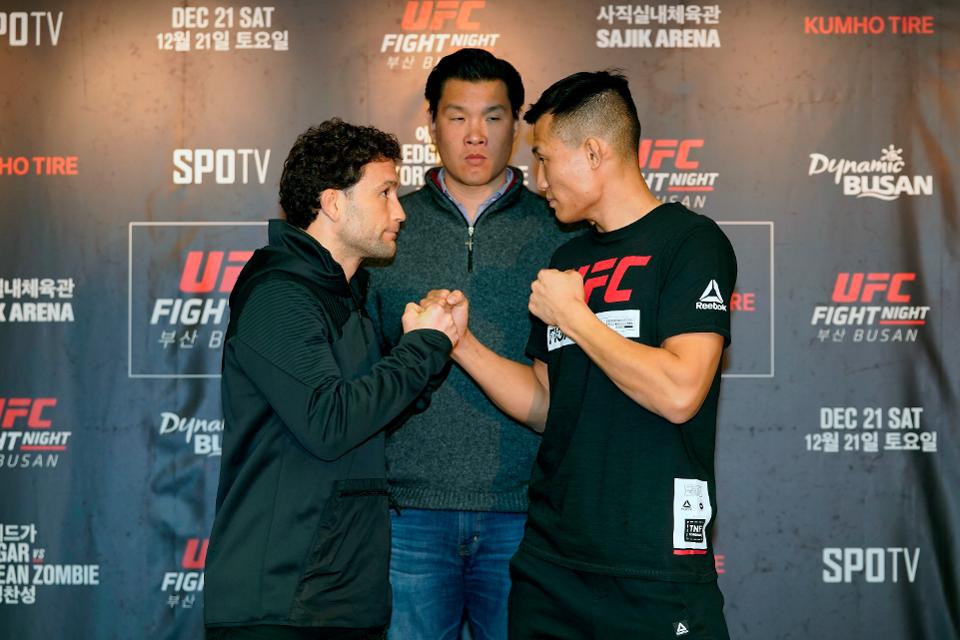 UFC Fight Night 165 takes place in Busan, South Korea, headlined by their very own Chan Sung Jung ‘The Korean Zombie’ against Frankie Edgar in what is sure to be an entertaining bout. Both fighters know that with a win over the other a title fight is well within their grasps.

Frankie ‘the answer’ Edgar has had the answer for almost everyone except the elite in the division as he takes on the ever-dangerous Korean Zombie in his home country. Edgar will likely employ his wrestle heavy, pressure style on Zombie but this will not be an easy fight for him at all. Jung has risen the ranks by winning two of his past three fights following his return from a lengthy three-year layoff. His only loss was a last second KO in which he was ahead on the scorecards in.

Edgar, who is now 38 is at a bit of a do or die time in his career. He has always been a fighter at the top of the division without managing to regain the title he lost in 2012. Edgar accepts this fight as a late notice replacement for Ortega and will try to get a win here which will push him back to a spot where he is likely one win away from a title shot. The Korean Zombie is only getting more clinical every fight and might just prove too much for the ageing Edgar but rule out the answer at your own peril as he is a fighter who has been at the top for some time and that isn’t a fluke. For that reason, I am staying away from a play on this fight

Barcelos finally made his debut after many setbacks with an uppercut KO victory over Kurt Holobaugh. Many think he has a bright future ahead in the organisation and I can see why but Said Nurmagomedov is not a good matchup for him. Said, who has no relation to the champion Khabib, is a striker who has made huge strides since his split decision victory in his first UFC fight. In his last fight he beat Ricardo Ramos clinically and will try to do the same to Barcelos here, keeping it at range and picking him apart and I think he can do that successfully again as the underdog in this fight.

Pick: Nurmagomedov to win (-105 at PointsBet)

Suman Mokhtarian is not UFC quality and it is simple as that. On the Australian circuit he beat largely unknown fighters some of which were having their first MMA fight. While I don’t see Choi becoming a UFC champion, I do see him as a more complete fighter than his counterpart. Choi is a bit of a brawler which can leave him vulnerable to a big shot but even if he does fight that style of fight odds are it is Mokhtarian dropping first.