Unibet is one of the worldwide leaders in the online gambling industry and has recently announced that it will be expanding its operations into the United States!

The addition of the Unibet brand will be a must have in any serious betting arsenal and we have a full review of the Unitebet product below.

Founded in London in 1997 and initially operated out of the house of founder Anders Strom, Unibet acquired it’s first bettign licence in 1998. Initially, the company took bets over teh phone and after a few years in operation, it launched their first betting website.

Since then, the company has continued to grow and as of 2020, the company has over 1,500 employees in over 100 countries. The headquarters of Unibet resides in Malta and they currently have over 11 million customers worldwide.

Unibet have already launched in New Jersey and have recently acquired a license to start trading in Pennsylvania. Expect the expansion of Unibet to continue over the next few years.

Unibet have one of the best sign up incentives currently on offer in the United States. When you sign up for an account at Unibet, you can claim up to $500 worth of bonuses instantly.

Unibet are no stranger to the sign up bonus game, offering a great variety of incentives across their 100+ countries of operation. Unibet is currently only available to customers in the state of New Jersey, and they need to enter the code UBCASINO500 to claim the fantastic $500 sign up bonus!

Use the promo code UBCASINO10 when you register and get a free $10 bonus. Use that money to try out all your favorite Casino games risk free.

Recommended: How about a 100% deposit match? Just enter the code UBCASINO500 when you are depositing and Unibet will match your deposit up to $500 on your first deposit!

Unibet has a built in website that has been proven around the world at their disposal. The desktop site is clean and simple to use, with the list of sports across the top bar and the betslip on the right hand side of the screen.

The app is where Unibet really excels, however. With the infancy of many of the other sportsbooks currently available in the United States, the Unibet app really stands above the majority, with a seamless user interface allowing its customers to place bets quickly. 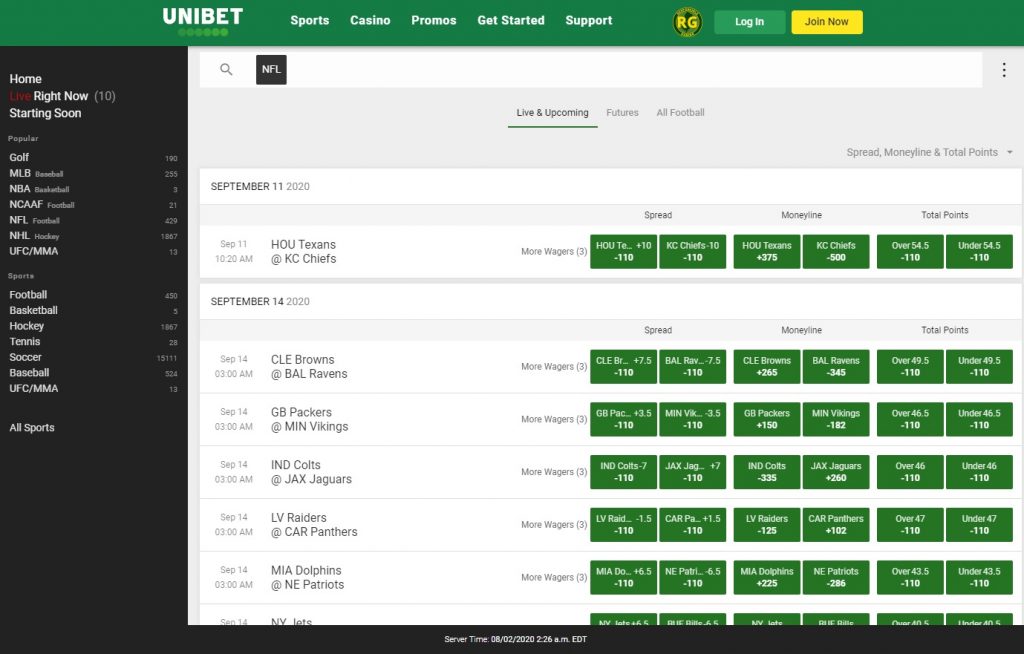 Total Sports Picks sometimes receives compensation from the sites we review. Rest assured, we review each site thoroughly and only give high marks to the very best. The thoughts expressed here are our own. For full details, see our Terms section. We also make every effort to keep all content as up to date as possible, but take no responsibility for any incorrect information on the page. If you have questions or spot something that needs updated, give us a shout via our Contact Us page.