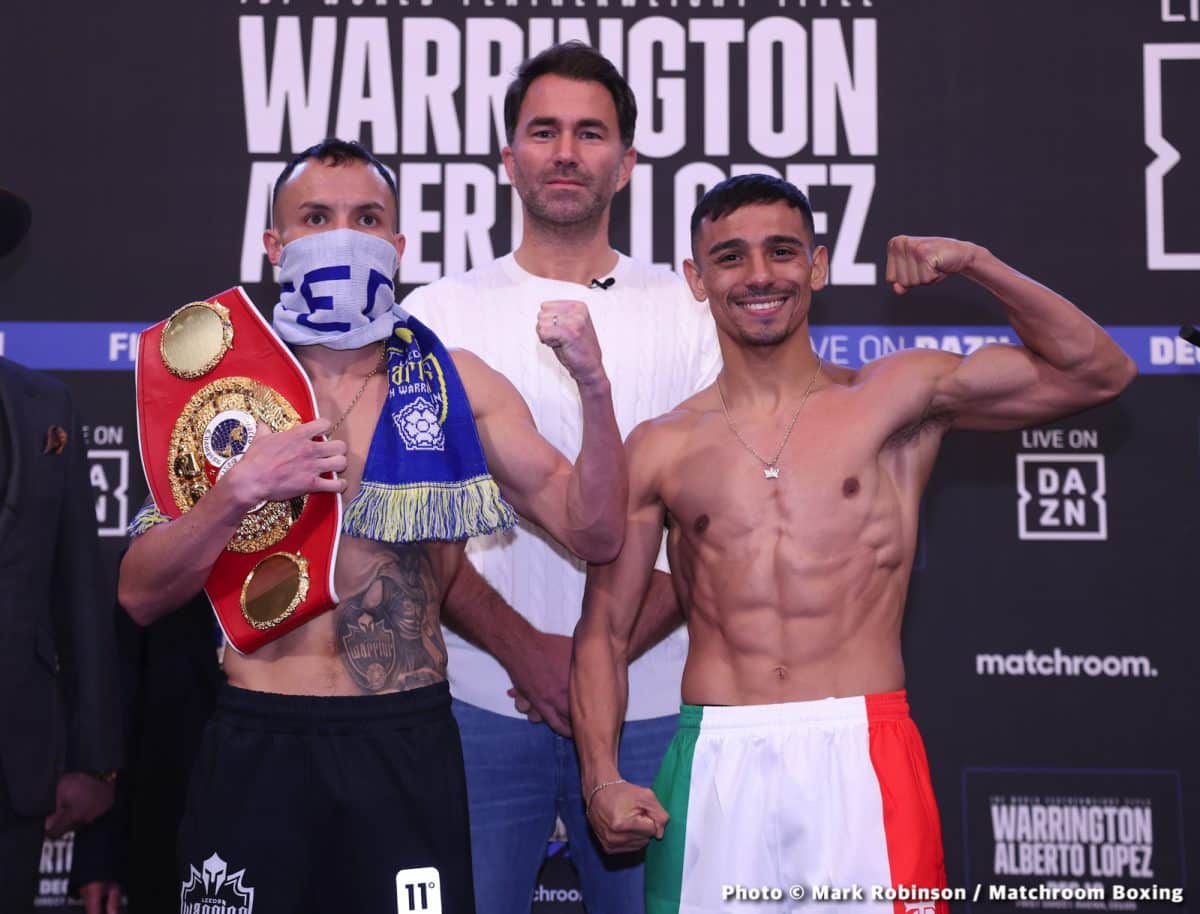 Josh Warrington (31-1-1, 8 KOs) makes the first defense of his IBF world featherweight title on Saturday night when he takes on Luis Alberto Lopez (26-2, 15 KOs) in his hometown of Leeds, England, on DAZN.

Warrington is a two-time world champion at featherweight and has held the IBF version of the title twice. The 32-year-old enters the contest with an impressive record of 31-1-1 despite only registering 8 KOs. Though he has not kayoed many of his opponents, his last two fights have come via stoppage. Still, his current knockout ratio stands at just 24.2 percent.

Warrington first won the IBF title when he beat Lee Selby by split decision in 2018. He then went on a run against British fighters, successfully defending it against Carl Frampton and Kid Galahad. He then stopped Sofiane Takoucht in the second round before he vacated his title.

Warrington faced Mauricio Lara in his next two fights. The first saw a surprising upset when the champion was stopped in the ninth round of a February 2021 fight at Wembley. The rematch between the two 7 months later was declared a no-decision after Lara suffered a cut over his left eye from an accidental headbutt in the second round.

Lopez will need to recreate the same chaos his fellow Mexican countrymen Lara did last year when he stopped Warrington.

Lopez has two losses on his resume but they have not been recent. The first defeat Lopez suffered came at the hands of Abraham Montoya by way of a 10-round split decision in 2018. He then dropped a 10-round unanimous decision to Ruben Villa a year later. Since then, he has won nine straight fights, including wins over Isaac Lowe, Gabriel Flores Jr., and Andy Vences.

For Warrington, a win over Lopez is vital if he wants to have a big 2023 – even more so if he wants to take on the big names at 126 in the US like Rey Vargas, Emmanuel Navarette and a trilogy with Lara. A lot is on the line for him.

The odds for both are rather favorable. Warrington is a slight favorite at -140, while Lopez is a slight underdog at +110. So if we’re comparing comparable lines, we should see whether or not these fighters are indeed in comparable positions to win.

To me, Warrington’s run is a bit of a mirage. Sure, he has the bigger names, but Frampton was older, Selby was maybe overrated, and his last fight with Kiko Martinez was more of the declined version of Martinez than someone who upset a champion for a world title.

I still do not think Warrington has recovered from the bout with Lara. I think under pressure, he has the tendency to fold. But is Lopez a version of Lara? I guess we will find out.

I like the wins of Andy Vences and Gabe Flores on Lopez’s resume. I think although he may give up the height and reach, he will punish Lara on the inside. I am taking a flyer here and picking the upset with Lopez to win.