A battle of former Welterweight king and future title prospect meet in Las Vegas, Nevada for UFC on ESPN 9. The card is full of former Contender Series prospects which makes it fitting that the Apex Centre is the host of this fight card. While novel to some the fact that the Apex Octagon is 5 feet smaller than a regulation Octagon will change how some of these fights will play out and the smaller Octagon size often results in more finishes. So, let’s dive into some of the key fights below. 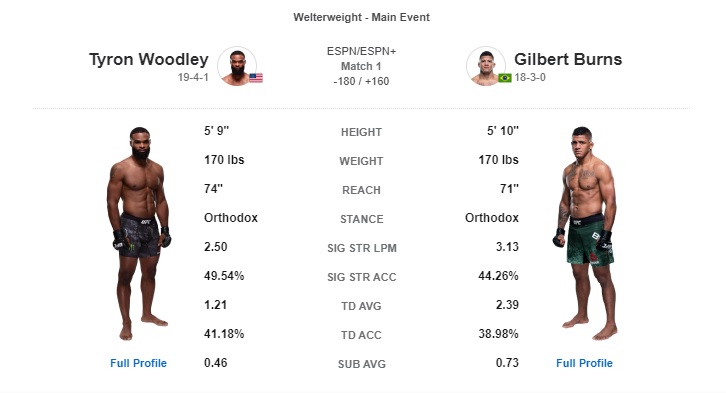 I am really keen on T-Wood getting back to winning ways here which is a real shame for Gilbert Burns. Burns has strung together a nice array of wins of late which has seen him get into Welterweight title contention, but he meets a different beast here in Woodley. Beating Maia while impressive, was not shocking, as he has the grappling pedigree to hold off Maia while having a sizeable striking advantage, and it showed. Woodley, however, has the wrestling caper and jiu jitsu sharpness to repel Burns trying to take this to the mat and in case he does to survive what he throws at him.

While Burns has improved greatly on his feet of late, he still has been picked apart by strikers previously and his chin is questionable. He has been finished by strikers with less explosive power than Woodley and I expect Woodley to come forward and land one of those power hooks which will leave Burns waking up to the bright lights of the Octagon. Woodley has a point to prove after his dismal display against Usman and fully expect the former champ to come back with a bang at the expense of the Brazilian. 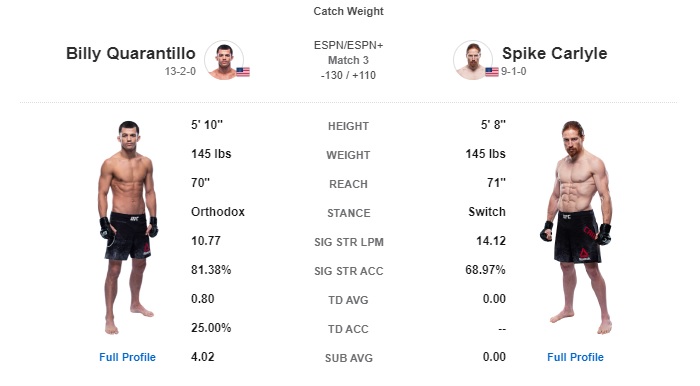 Billy Quarantillo made his UFC debut in impressive fashion dismantling Jacob Kilburn who took the fight on short notice. While I was impressed by him, I do not see how he will be able to deter the takedown attack of Spike Carlyle. Quarantillo has a forward pressure style that works well on fellow strikers but not on counterpunchers or grapplers and that is what he meets here.

We only need to go back to his Contender Series fight against Kamuela Kirk where he was put in deep water with his lack of takedown defence before coming back to finish Kirk late who faded down the stretch. Carlyle is too good on the ground to not take advantage of Quarantillo’s short comings in wrestling and looks a good chance to get the upset victory. 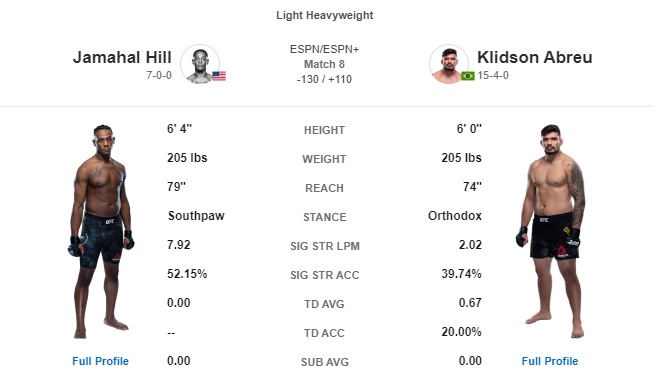 It is only poor judging that has led Abreu to be 1-2 in the Octagon and he gets a very winnable fight here. Jamahal Hill is 7-0 but hasn’t done a great deal to impress me in those victories. He gave up six takedowns in his UFC debut but wasn’t made to pay and he won’t be able to get away with that display against Abreu.

Abreu has 10 submission wins on his resume and before he joined the UFC, he had five straight submission victories including a win over Light Heavyweight contender Johnny Walker. Abreu should be way too slick on the mat for the still raw Hill. 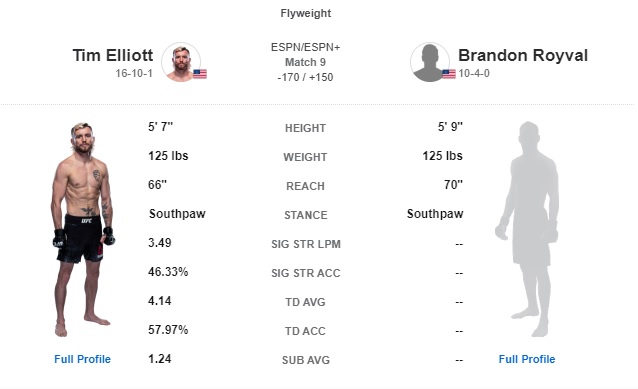 Tim Elliott has been thrown to the wolves in his last few fights and this is a big step back in opposition for him. Elliott is an awkward striker who has slick ground skills and for Brandon Royval who was schooled by Casey Kenney at the back end of 2018, I would be surprised if Elliott doesn’t catch him in a scramble and put him away.