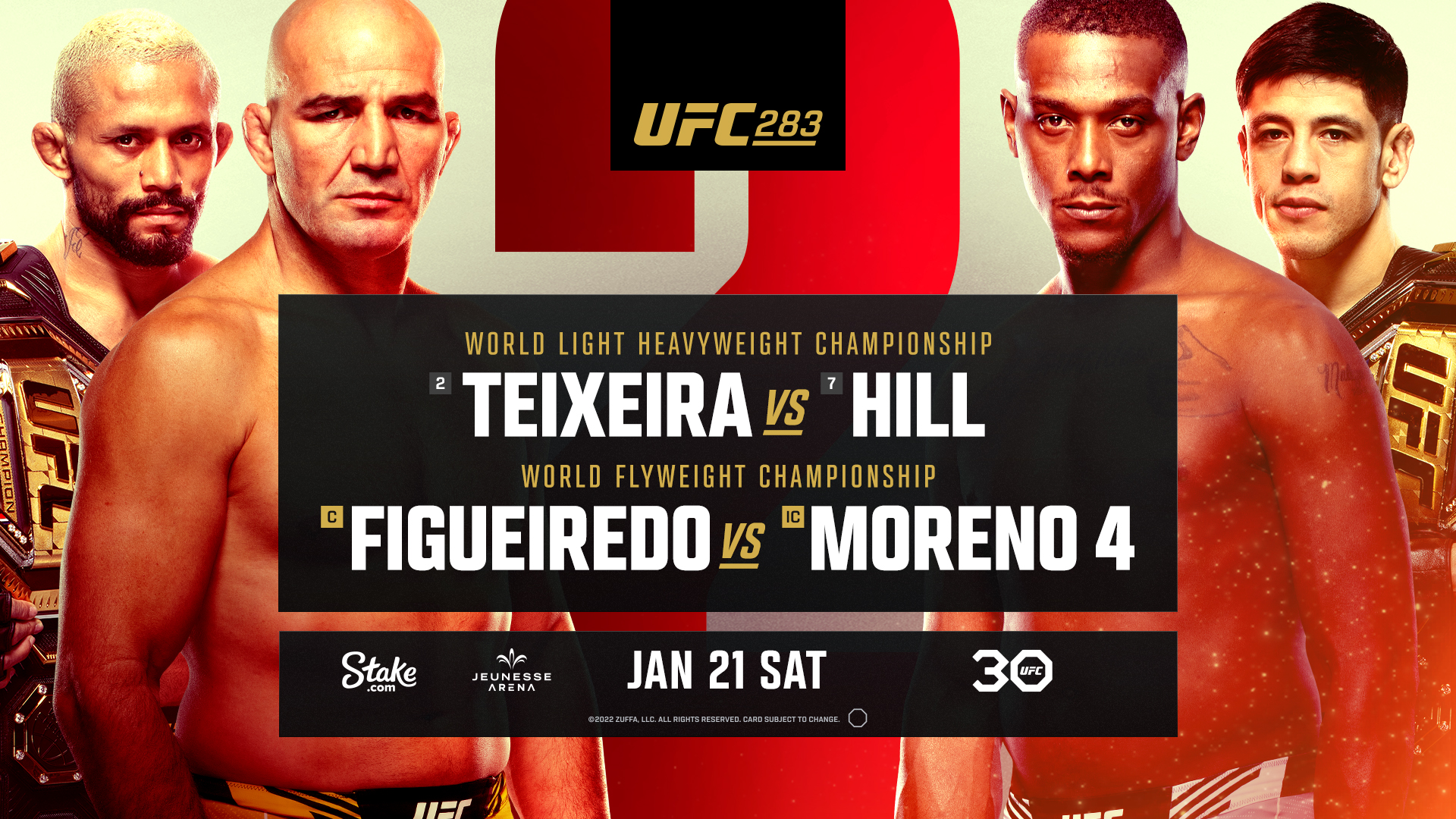 Brazil hosts the first pay-per-view card of the year this weekend with plenty of hometown hero’s leading the charge. In the main event Glover Teixeira takes on Jamahal Hill for the vacant Light Heavyweight title. While in the co-main Brandon Moreno and Deiveson Figueiredo meet for the fourth time as they duke it out for the Flyweight throne. Brazilian’s Gilbert Burns, Jonny Walker and Jessica Andrade all feature on the main card. We take a look at the two title fights and one on the prelims below.

Jiri Prochazka has vacated the Light Heavyweight title after suffering a serious shoulder injury so Glover Teixeira and Jamahal Hill will duke it out for UFC gold. Jamahal Hill is an exciting finisher who is on a three-fight winning streak but meets a man that has been notoriously discounted throughout his career in Glover Teixeira. The Brazilian has all the tools to win this fight as Hill has surrendered multiple takedowns to both Thiago Santos and Darko Stosic in the last two years, men with far lower calibre grappling than Teixeira. He almost always opens as a betting underdog and this weekend’s fight is no. Hill is a fun fighter to watch but is outclassed here by the Brazilian veteran. Cash in on the Teixeira disrespect and expect him to get his hand raised in front of an adoring crowd.

Glover Teixeira to win (+115 AT POINTSBET)

Brandon Moreno and Deiveson Figueiredo meet for a fourth time this weekend but I am predicting a one sided fight. Let’s be frank Moreno was so confident heading into their last fight that he showboated a bit and while I still thought he did enough to win, he only has himself to blame. Their second fight showed the gap between the two when it comes down to it. Moreno is faster, has better technique and a more advanced all-round grappling skillset. I expect the Mexican to put on an absolute clinic here.

Brandon Moreno to win (-110 AT POINTSBET)

I highly doubt this fight gets out of the first round, regardless of who comes out on top, however, the odds-on offer for the fight to finish in the first is too short. So instead, I am backing Terrance McKinney. Ismael Bonfim is on a 12-fight winning streak, where in the latter of that streak he plied his trade in LFA before securing a UFC contract on the Contender Series. McKinney’s route to the UFC was also through the Contender Series and in his UFC tenure to date he has been an all or nothing fighter. Where this fight boils down to it is who can get the ascendancy early and since Bonfim has shown a tendency to back up when pressured I can see McKinney swarming him and finishing him before he even gets started. Back McKinney to secure the win in emphatic fashion.