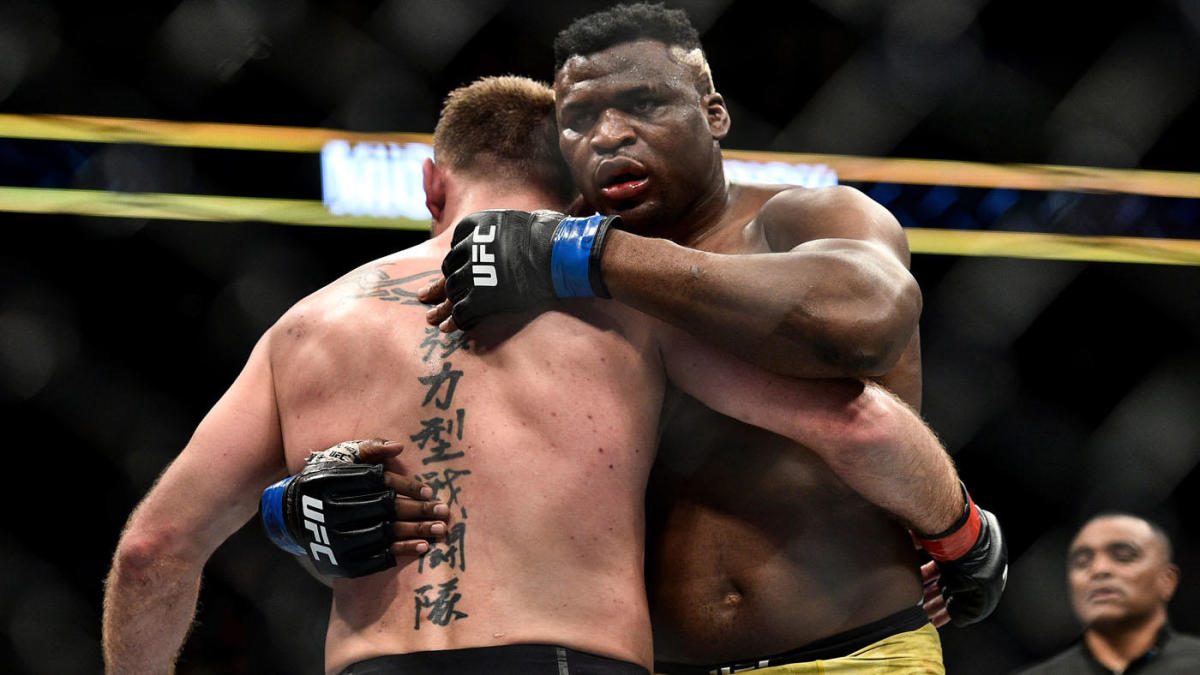 The Apex Centre in Las Vegas, Nevada, hosts UFC 260 which is headlined by a not to be missed Heavyweight rematch between Stipe Miocic and Francis Ngannou. With Alexander Volkanovski having to be pulled due to COVID, Tyron Woodley and Vicente Luque are our new co-main in what is probably Woodley’s last chance to prove he still is valuable to the UFC. We also see the return of Sean O’Malley against Thomas Almeida and many more exciting match ups littered throughout, including a barn burner between Jamie Mullarkey and Khama Worthy. We dive into the preview below.

I am declaring here and now that Francis Ngannou will knock out Stipe Miocic. The predator has well documented power which is often compared to being hit by a Toyota Hilux. That line is so readily thrown around that it loses its emphasis. Simply put the man hits ridiculously hard and it doesn’t matter who you are if he catches you clean you are going to sleep.

I would recommend completely throwing all MMA math out of the window as it never proves accurate in MMA and should be torn up completely in this match up. Technically Miocic is better in every single aspect of the fight game. In the first fight he made a mockery of Francis after going through some hairy moments in the first round. One shot of which visibly hurt Miocic and he didn’t catch him anywhere near clean.

Ngannou definitely needed to work on his wrestling as he showed very little positional understanding in their first encounter but still managed to power himself out of clinch positions. It is noted that he has spent time with Kamaru Usman working on his wrestling and has gone to Xtreme Couture to rectify his conditioning. While it is impossible to see if either his wrestling or conditioning has improved due to finishing his last four opponents in under a round, I am happy to gamble on it improving enough to win this fight.

Ngannou may not be the most technical but he is improving and has surprisingly good dexterity that allows him to throw solid high kicks. He will catch Stipe early and put him away. And New.

Let’s start off by saying I am tipping Tyron Woodley and no I haven’t gone mad just hear me out. Woodley has admittedly been horrendous losing his title Usman and then to Covington and Burns, not winning a round in any of those fights. He looks to have lost all faith in his hands and has been out grappled in all three fights. This realistically could be Woodley’s final fight in the organisation if he fails to win. His next contract would be that of an average Welterweight if he was to fall here and I am sure he knows how important this fight is. All three fights he lost came to the clear best three fighters in the division and all centred on his weakness of being easily backed up against the fence.

Luque has a lot of power and some decent skills on the ground but personally I am not sold on him being a top prospect. He is also incredibly hittable, something Woodley’s past three opponents are not. Luque will need to pepper Woodley with kicks and pick him apart from the outside while using good footwork to evade returning overhands from T-Wood. I have not seen that from Luque in his Octagon tenure as he is usually the more powerful striker and happy to exchange in the pocket and trust his iron chin.

I believe that is a recipe for disaster against Woodley who still looks to have the same power that made him a world champion. If he goes shot for shot with Woodley he is getting stopped. Luque will overcommit to a shot, not move his head off the centre line and be floored by a Tyron Woodley right overhand. T-Wood gets it done.

Love him or hate him Sean O’Malley is a star and a future title contender. He effortlessly changes stance and utilises his wide kicking arsenal to set up his powerful right hand. O’Malley is coming off his first defeat, that he has failed to accept, but to be fair was a freak injury from a kick. A kick by Chito hit a nerve in his foot that meant he was unable to feel it and move it properly.

You could see this as he would roll it every time he tried to pick up his foot, which ended up leading to the fight being finished by ground and pound. If you want another example of this happening, go back and watch the first meeting between Michael Chandler and Brett Primus. A kick left Chandler in all sorts and the same thing happened to O’Malley. I expect O’Malley’s movement to be too much for Almeida who will come charging into an O’Malley high kick or straight right. Expect an O’Malley highlight KO and the hype train to be back in full force.