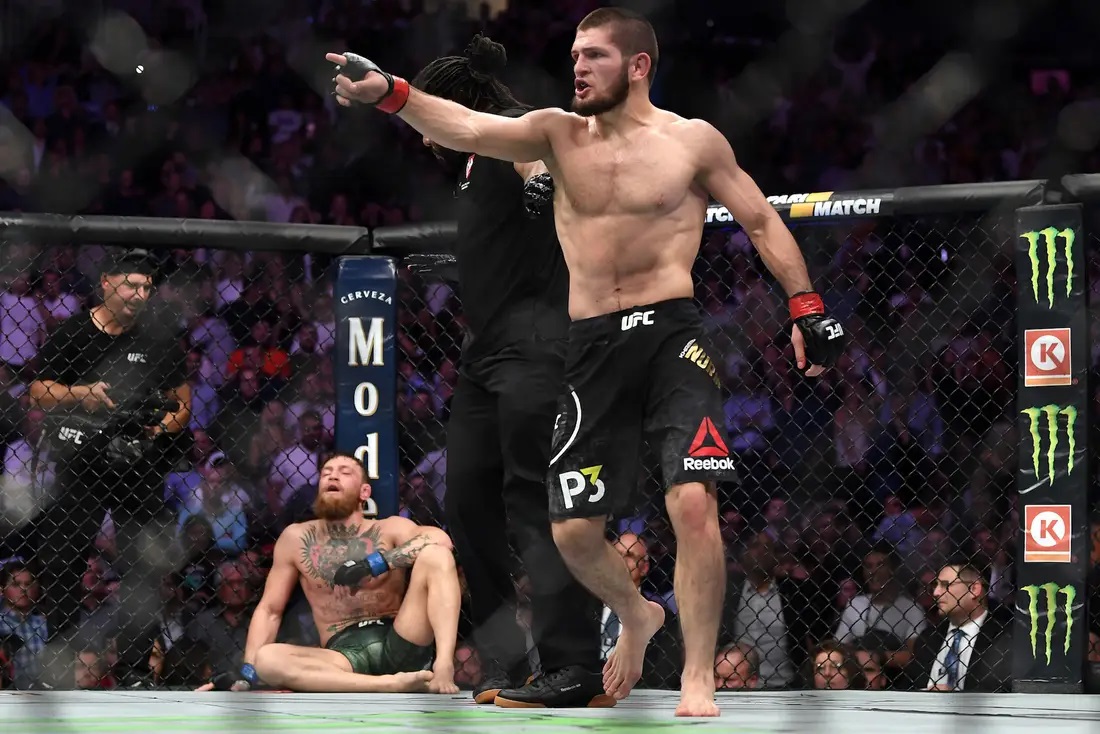 Finally UFC 254 is here and we get to see the Lightweight title on the line as Khabib Nurmagomedov faces off against Justin Gaethje. In the co-main, Robert Whittaker and Jared Cannonier meet in what is a Middleweight title eliminator. We also have a couple of Heavyweight bouts, the rematch of Cutelaba and Ankalaev and many other exciting match ups on this unmissable card. From Fight Island, Abu Dhabi we have UFC 254 and the preview for the main event and a cou 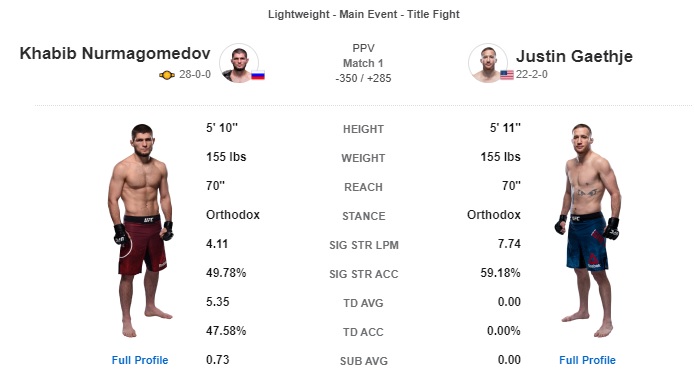 This is a fight I have been wanting since Gaethje returned from his two-fight skid to topple James Vick. In that performance he put the writing on the wall that he had returned more focussed and with the aim of UFC gold, not just to be entertaining. In earning the Interim Lightweight title, Gaethje could not have been more dominant or impressive against Tony Ferguson. He out struck and outworked Ferguson right up until the fight was stopped in the fifth. While that was impressive, he has to rise yet another level to beat Khabib Nurmagomedov who has amassed a perfect 28-0 record in his professional MMA career in which he has only lost a single round since joining the UFC.

Khabib’s chain wrestling is what sets him apart from the rest. He will ankle pick you in the middle of the Octagon and drive you back to the fence and that is where he gets to work. Khabib almost effortlessly changes from single legs to double legs to body locks and trips before his opponent’s know what to defend. Once he breaks down their posture, he will grind them to the mat with his suffocating top pressure and control. This is a game plan that has been worked on and mastered over many years and no opponent is yet to cope with his wrestling. Now cue Justin Gaethje who has the best wrestling pedigree and defensive wrestling that Khabib has ever faced. In Gaethje’s UFC career every time he has been taken down, he has almost instantly bounced back to his feet. Overall he has spent a measly 17 seconds in bottom position. It is key for Gaethje to keep his back off the fence as if he can I believe he can repel Khabib’s takedown attempts. However, if Khabib can get him pressed up against the fence he will inevitably get the takedown and as a wrestler himself, Gaethje will not be used to fighting off his back which could spell big trouble for the American.

The key to win this fight for Khabib is the same as it always has been which is manage distance and get his opponent up against the fence and get to work. For Gaethje he needs to do three things and if he can do all three, I believe he wins this fight. He must firstly deploy a leg kick heavy attack in the early exchanges which should diminish Khabib’s takedown drive and power. He secondly needs to keep his back off the fence and finally must manage distance and try to get Khabib to fight off the back foot whenever possible. This fight should be an absolute tactical masterclass from both men and whoever can impose their game the best will walk away with the Lightweight strap. While I do think it is a massive risk going against the champ, I do see too much value around Gaethje to not back him to get the win. Make sure you don’t miss this fight! 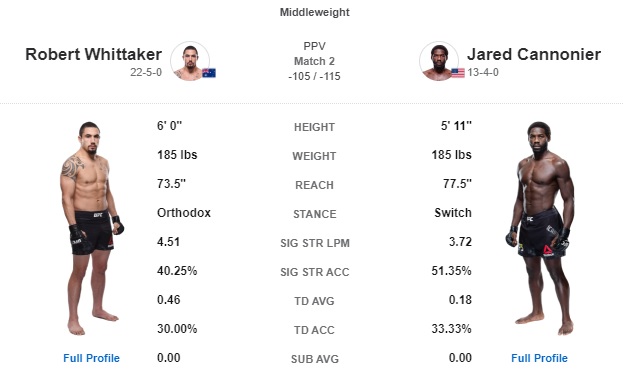 I do think it is often forgotten just how good Whittaker is. Granted Cannonier carries some sort of power in his hands and his move down to Middleweight has proven to be a good one but other than losing to Adesanya who has gone on since to further show just how good he is, Whittaker hasn’t lost since 2013. In that time, he has beaten Jacare Souza, Derek Brunson, Darren Till and Yoel Romero twice.

If he can not be finished in 50 minutes by Yoel Romero it is a big call to think Cannonier can finish him in 15 minutes. If it goes the distance, I can only see it going in Whittaker’s favour as he is the more polished striker and wrestler. Whittaker has a level of technical kickboxing that Cannonier has never seen and I cannot wrap my head around how he is the underdog. 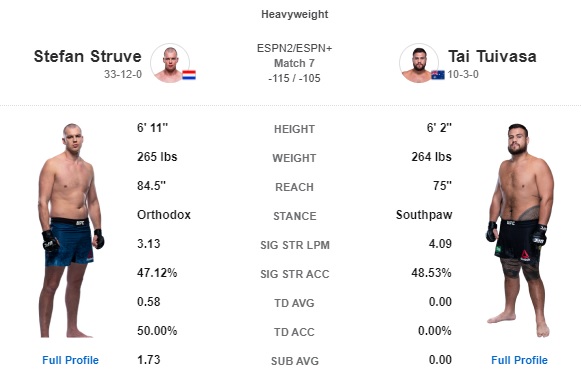 Stefan Struve has lost four of his last five and teased retirement before his last fight where he was finished in the second round by Ben Rothwell. At 7 feet tall he will always have a reach and height advantage but has never really utilised it properly.

He has always been ‘chinny’ and while Tai Tuivasa is on a three-fight losing streak, it will only take one big punch to land on the brittle jaw of Struve to put him down. Tuivasa still carries great power and it shouldn’t take long for him to land one on the button.