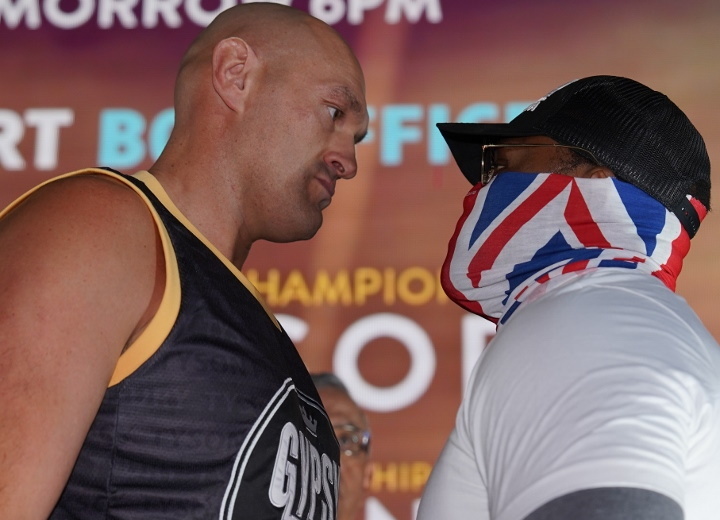 Tyson Fury vs. Derek Chisora Prediction, Plus A PointsBet Promo

Tyson Fury vs. Derek Chisora Prediction, Plus A PointsBet Promo

Boxing is funny. I’m not sure there is a less warranted trilogy than the one we’re getting this weekend between Tyson Fury and Derek Chisora. Fury won the first two contests and there was no doubt in either bout.

Nonetheless, the WBC heavyweight title will be up for grabs and the consensus #1 heavyweight in the world, Tyson Fury, will return to the ring this Saturday, December 3 live from Tottenham Hotspur Stadium in London, England.

Fury (32-0-1, 23 KOs) has retired from boxing and then come back a few times now. Oddly enough, Chisora retired from boxing after his July win over Kubrat Pulev. That apparently made Chisora the most appealing opponent. Fury had a plethora of other options for this return bout, including Anthony Joshua, Joe Joyce and unified heavyweight champion Oleksandr Usyk. But here we are with a trilogy no one asked for. And when the world heavyweight champ fights, you have to look at the odds and lines to find betting value.

Below we’ll share our Fury vs. Chisora 3 prediction, analysis and best bet using odds from PointsBet. If you’re not already a PointsBet customer, you can score 2 risk-free bets by signing up now and using PointsBet promo code 2FREEBETS when registering. Click here to claim your risk-free bets.

The heavyweight division is a division where one punch can change it all, no matter the odds. If Chisora somehow pulls it off, it will be one of the biggest upsets the sport has ever seen as he is a massive +1000 underdog. At the other end of the spectrum, Fury is a massive favorite. He’s currently priced at -3000.

These two first met in July 2011, when Fury beat Chisora to win the British and Commonwealth heavyweight titles. They met again in 2014, with Fury beating Chisora with Chisora not wanting to continue after the 10th round. Chisora, now 38 years-old, is 1-3 in his last four fights.

After finishing a proper trilogy with Deontay Wilder in October 2021, Fury beat Dillian Whyte via TKO in April 2022 . Outside of Oleksandr Usyk, not many people currently in the heavyweight picture will pose a threat to Tyson Fury.

Chisora (33-12, 23 KOs)  will offer little to no resistance in my opinion. This fight is nothing more than a cash grab. Fury reportedly will make close to $25 million, while Chisora will take home a nice retirement check of $4 million.

I think this bout will be short. The over/under is 6.5 rounds, but I do not think it even gets past the 4th. Fury is just that much better and Chisora has too many miles on his tires. In my opinion, “Del Boy” is here for one last payday. He will indeed receive that check, but he’ll also get stopped within 6 rounds to earn it.

MAKE YOUR PICK AT POINTSBET