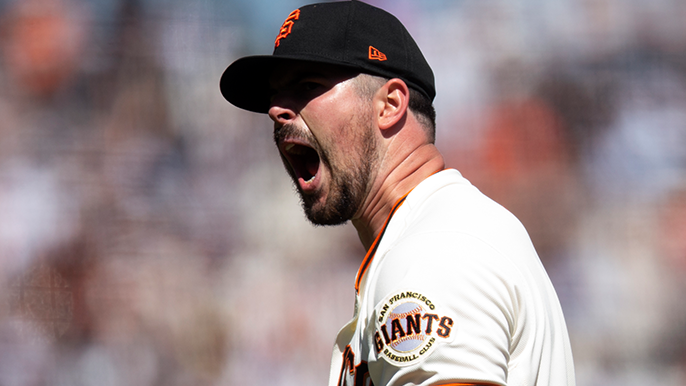 This week’s MLB action comes to a crescendo when the Cardinals host the Giants on Sunday Night Baseball.

San Francisco was one of the biggest surprises in baseball last season, winning 107 games and taking the NL West title over the 106-win Dodgers. They’re off to another strong start in 2022, going 20-13 through their first 33 games. Whether you see it on paper or not, this is another sound San Francisco squad.

The Cardinals have scratched out an 18-15 record. They’ve already racked up a +28 run differential – good for a 20-13 expected win-loss – and will likely be in the playoff hunt as expected pre-season.

These are two of the Top 10 teams in the Majors, and they’ll both start their respective aces in tonight’s Sunday night showdown. It should be great entertainment for anyone watching this instead of the NBA Game 7 between Dallas and Phoenix. We’re here to help you make the most of your Sunday Funday and have shared the betting value we’ve discovered below. 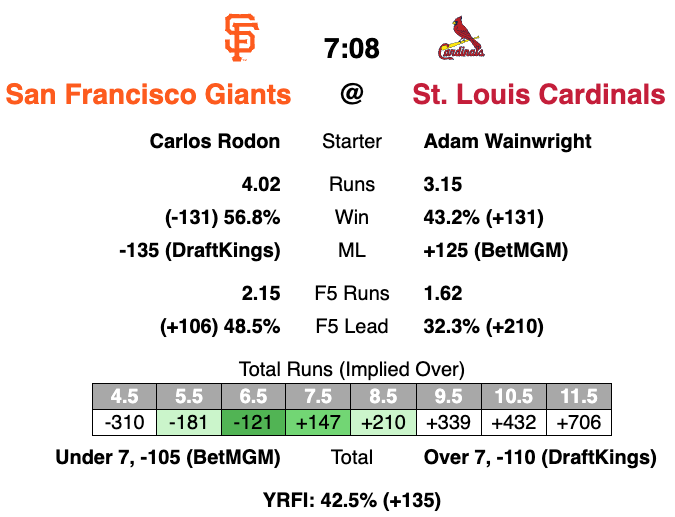 Our friends at Ballpark Pal have this projected as a low-scoring affair, in a relatively neutral environment from a weather standpoint. Busch Stadium is one of the more pitcher-friendly parks in baseball, though, so we can’t expect hitters to get much help tonight.

The Cardinals counter with Adam Wainwright. The timeless right-hander continues to hum along in his age-40 season, putting together a solid 3-3 campaign that is supported by solid peripheral stats (3.18 ERA, 3.39 FIP, 24.2% Hard%). He has thrown 5+ IPs in all but one start and projects for another quality outing this evening.

So we agree with the oddsmakers. This has all the makings of a pitcher’s duel. So what bets are we backing?

Look no further than the six LHBs in tonight’s SF lineup. For his career, Wainwright has had modest platoon splits (.282 wOBA against RHBs vs. .314 wOBA against LHBs.) This split appears to be getting more significant, as the 6’7″ right-hander has a paltry 1.20 K/BB (.336 wOBA, 4.55 xFIP) against southpaw sluggers so far this season.

As a team, the Giants are among the toughest for RHPs to strikeout (21.2% K%) and keep off the basepaths (.333 OBP, 10.2% BB%). The visitors will be able to turn their lineup over, regardless of how many baserunners are being plated along the way. I’m looking at elite LHBs Brandon Belt and Mike Yastrzemski (.363 and .356 wOBA vs. RHPs, respectively) as the two bats most likely to rack up >1.5 total bases.

The Cardinals are similarly efficient against LHPs. As a team, they don’t strikeout much (20.2% K%), they grind out baserunners (.335 OBP, .353 wOBA) and they don’t make cheap contact when they do square one up (.208 ISO). I have Rodon projected for 6 Ks tonight – a respectable number, but a far cry from the current lines of 7.5-8 I’m seeing.

Carlos Rodon has yet to give up a HR in 35.0 IPs this season. As great as he has been, he is not going to go without gopherballs this year. He has 1.01 HR/9 for his career and will not have the HR-suppressing size of Oracle Park behind him. Paul Goldschmidt and Nolan Arenado (.427 and .411 career wOBAs against LHPs, respectively) are two of the best southpaw-smashing sluggers in baseball and each project for at least one hit tonight. I don’t think they’ll be of the cheap variety.

Overall, these are two great pitchers in very mediocre spots. I see nothing that suggests we’ll see a surprise shootout, but I don’t think this will be an epic pitcher’s duel, either. The books have skewed too far towards the latter end of the spectrum, so I’m seeing value in a few lines towards the former. Think a run-of-the-mill, 4-3-type game that sees the stars shine and the scrubs scuffle. Below are my best bets accordingly.