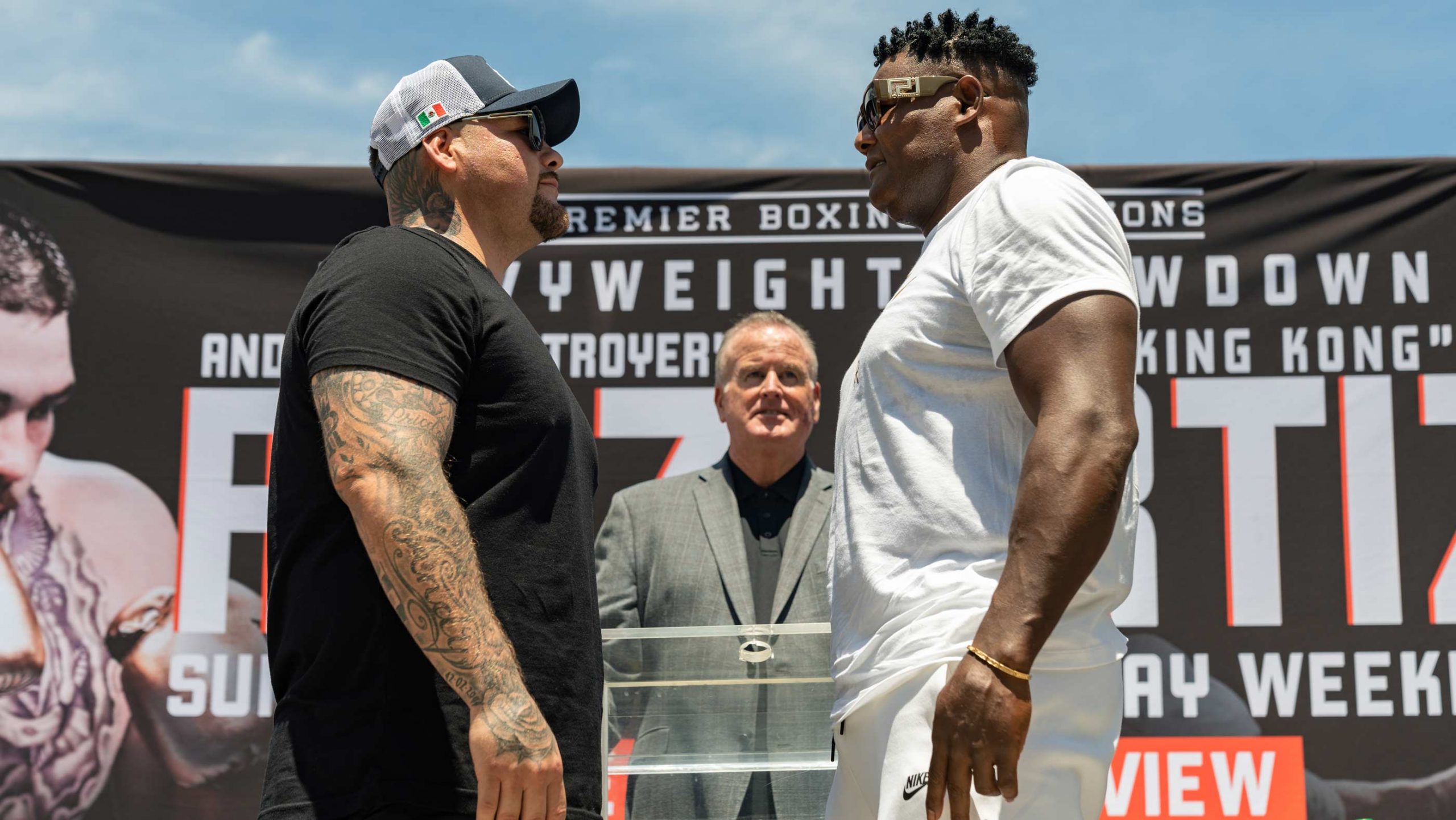 Title fights aren’t always the most dramatic bouts in boxing. Sometimes it’s “crossroads fights” between veterans that offer the most intrigue.

Such is the case this Sunday, September 4, when Andy Ruiz (34-2, 22 KOs) takes on Luis Ortiz (33-2, 28 KOs) on FOX Sports PPV. The winner will get back on the periphery of heavyweight contenders, while the loser might find himself looking at the end of his career entirely.

Andy Ruiz vs. Luis Ortiz time, ringwalks, undercard and how to watch

Ruiz-Ortiz will take place Sunday, September 4, 2022. It is one of the rare, major boxing cards to take place on a Sunday in recent memory. It also unexpectedly was announced as being held on PPV.

Here are the full details, including estimated Ruiz-Ortiz ringwalks for the maine event.

There will also be preliminary action televised on both FS1 and FOX. The FS1 fights will start at 7 pm ET and the FOX fights will begin at 8 pm ET.

While both fighters have held heavyweight titles in the past, oddsmakers have priced the 32-year-old Ruiz as the heavy favorite.

Here are the latest lines courtesy of DraftKings Sportsbook.

Now that we’ve covered the fight details, let’s dive into our Ruiz vs. Ortiz prediction and where there might be betting value.

We have a heavyweight slugfest in store this Sunday night. Fast-handed Andy Ruiz will take on veteran title contender Luis Ortiz. The pay-per-view fight takes place in Los Angeles at the Crypto.com arena.

Ruiz pulled off one of the biggest upsets in boxing history in June 2019 when he stopped Anthony Joshua to claim three heavyweight titles. However, in the rematch, he came in out of shape and lost a wide decision. In 2021, he fought Cris Arreola. While he was dropped during the fight, he went on to win a wide unanimous decision. Having only fought once since December 2019 – and not at all the past 15 months – ring rust might be an issue.

Ortiz has been a mainstay in the big boy division for close to a decade. He only has two losses, both of which came in fierce fights against former longtime heavyweight champion Deontay Wilder. Ortiz was last seen stopping Charles Martin at the beginning of 2022.

Ruiz is a pretty significant favorite coming into this contest. “Destroyer” is the younger fighter, coming in at 32 years old, while “King Kong” is seemingly on the wrong side of 43. It’s worth noting that while Ortiz has looked game in many of his recent fights, he looked his age against Martin. I think oddsmakers priced him correctly as a heavy underdog.

I think between Ortiz’s age factor and Ruiz’s  stamina always being in question, both sides carry significant enough liabilities that I think this fight ends in a knockout from one side or the other. The way both men looked in their last two respective fights doesn’t give me any indication that this will go the distance.

Ortiz looked past his prime against Charles Martin, who himself is past his relative prime. Ruiz went to war with Arreola, who has not been anything close to a Top-10 heavyweight in the last 5 years. These fighters will have no problem finding the other with their punches.

For me, all considered, Ruiz has been in better form. I think that fast hands will be too much for Ortiz at this stage of his career. Ruiz has also proven to have a sturdy chin against the likes of Joshua and Joseph Parker.

On the other side of the ring, Ortiz was dropped twice by Martin in his previously mentioned victory earlier this year. That is not a good sign, especially after being battered by Wilder twice in these later stages of his career. The miles are adding up and one way or another Ortiz will have to fend off Ruiz’s fast-handed attacks.

Ortiz will either fight in-between or counter – or he’ll hit the deck trying. I think hitting the deck will be the outcome. I think it’s likely he’s not able to continue after.

I like Andy Ruiz by stoppage in this contest.

Ruiz by KO, TKO or DQ (-135) at DraftKings
Related Topics