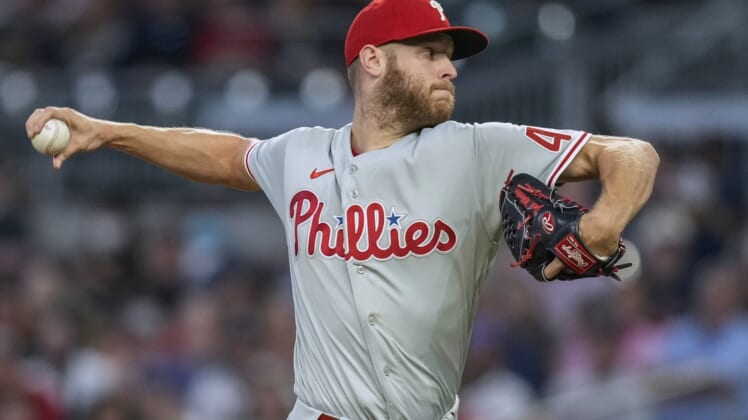 Memorial Day weekend marks the unofficial start of summer, and Sunday Night Baseball will kickoff the heart of the MLB season with a fantastic NL East showdown when the Philadelphia Phillies (21-26) visit the division-leading New York Mets (31-17).

The underachieving Phillies continue to scuffle, having dropped 7 of their last 10 games. Despite the lackluster start to their 2022 campaign, Philadelphia sports a +5 run differential and a 24-23 expected win-loss record.

While the Phillies are due for some positive regression as a team, their defense will need to improve for their season-long slide to stop. According to Baseball Savant, the Phillies have a league-worst -16 runs prevented and -20 outs above average. This team’s turnaround needs to start on the defensive side of the diamond.

The Mets have a healthy 8.5-game lead in the NL East despite being as seemingly snakebitten as ever. Jacob deGrom, Max Scherzer and Tylor Megill all have hit the IL in the first quarter of the season, but the ‘Mazing Metropolitans have motored on.

Will the Phillies complete the three-game sweep on Sunday Night Baseball? Is there betting value on either side? Read on for our prediction and betting picks. 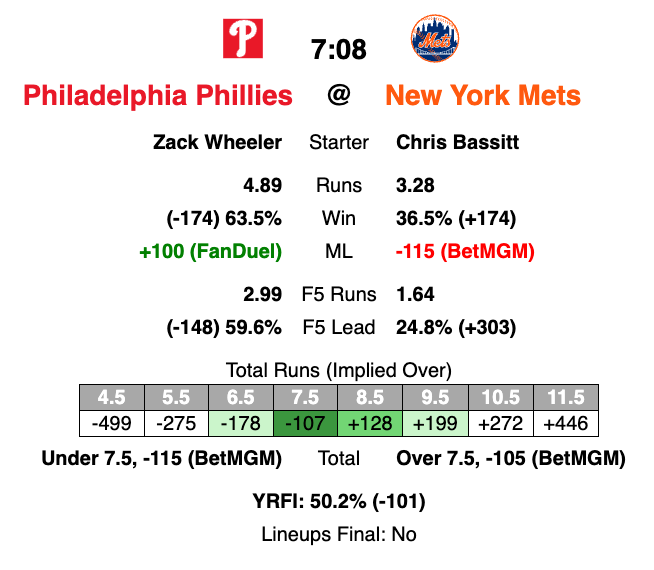 Our friends at Ballpark Pal (who powered the simulation above) are seeing value on the Phillies, and we wholeheartedly agree.

Wheeler has been one of the best pitchers in baseball thus far – and he has been even better against his former club. In nine career starts against the Mets, he has put together a 2.58 ERA, 2.69 FIP and 3.38 xFIP across 59 IPs. His median projection tonight is a Quality Start.

Chris Bassitt has been a critical, calming presence in New York’s rotation. His numbers aren’t anything to write home about – 4.54 FIP, 3.89 xFIP, 9.00 K/9 – but he has given the Mets much-needed innings. He has thrown 5.2 IPs or more in all but one of his nine starts this season. His achilles heel has been the long ball (1.53 HR/9) and LHBs have hit him especially hard (.344 wOBA).

We have a good pitcher hosting a great one, each backed by elite lineups. Oddsmakers set the moneyline as a near pick’em, which I simply do not understand. The Phillies project to win this game 60%+ of the time, which would suggest the line should be closer to -150 for the guests than even.

I would be hammering the Phillies moneyline if their bullpen wasn’t one of the worst in baseball. Their relief corps has a collective 4.25 ERA and 1.48 WHIP on the season. They shouldn’t be asked to pitch many innings tonight, but this nonetheless adds a wrinkle to my betting picks vs. game prediction.

I think the Phillies win and clear their team total, but will be balancing my action in-game.