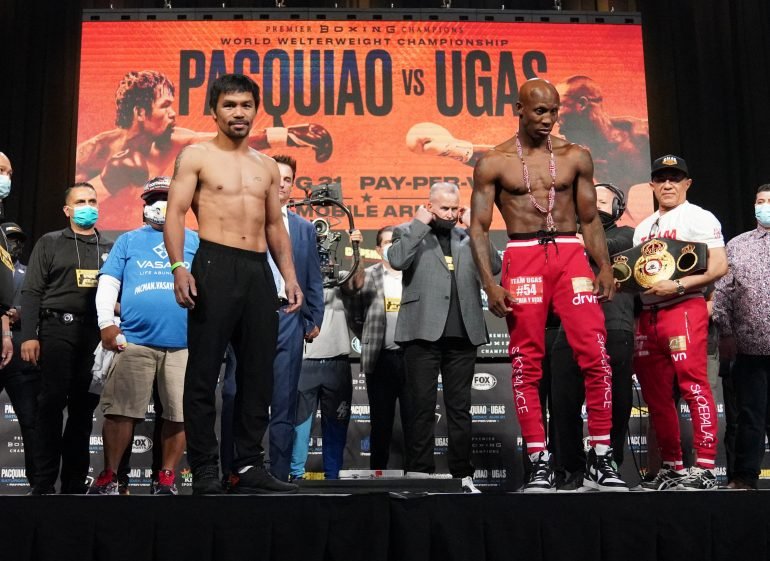 Pacquiao vs. Ugas Picks and Predictions

Pacquiao vs. Ugas Picks and Predictions

Few things in boxing are more exciting than a Manny Pacquiao fight weekend. As the aging Filipino legend enters his fourth (!!!) decade of paid combat, he shows little sign of slowing down. This is good news for fans of a sport too often saturated with the opposite.

Let’s take a closer look at this latest chapter in Pacquiao’s storied career and see if we can’t narrow down some picks for this big fight weekend.

If you’re new to sports betting, play along by joining PointsBet and be sure to use PointsBet promo code FREE100 when signing up to claim FOUR risk-free bets.

Claim Your Free Bets At PointsBet

Up until a few weeks ago, the odds for Pacquiao’s fight this weekend looked drastically different than they do today. That was back when he was slated to face pound for pound star Errol Spence Jr. in a classic crossroads fight. A torn retina caused Spence to withdraw which opened the door for crafty Cuban, Yordenis Ugas. While Ugas (26-4, 12 KOs) is stepping onto a stage of this magnitude for the first time, he’s certainly no pushover.

Even at the ripe old age of 42, Pacquiao (62-7, 39 KOs) has considerable advantages in speed, power and, of course, experience. While no longer the shockingly explosive dynamo of his prime, Pacquaio is still capable of throwing from all angles, confounding opponents with his improvisational style. He turned back challenges from the likes of Lucas Matthysse, Adrien Broner and Keith Thurman with relative ease in 2018 and 2019. Unfortunately, he’s been out of the ring since. And for a fighter of Pacquiao’s age, rust sets in a lot easier these days than it once did. On this side of 40, the bottom can fall out overnight. Has the long layoff robbed Pacquiao of the forward momentum he’s had in recent years?

Ugas is as capable as anyone of forcing an answer to that question. While not as flashy or skilled as someone like Spence, Ugas makes up for it in pure determination. Early career setbacks and a disputed loss to Shawn Porter in 2019 have imbued the 35 year old Ugas with a sense of urgency. He knows he’ll likely never get a shot like this again and is determined to make the most of it. He’s the classic high risk/low reward fighter that rival promoters hate and fans love to root for. The question is whether those intangibles are enough to narrow the gap in talent against Pacquaio. The feeling here is that unless Pacquiao has deteriorated to an insurmountable degree, his skill, experience and ring IQ should be enough to guide him past Ugas. The intrigue then lies in how?

For all his legendary power and seemingly endless highlight reel of knockouts, Pacquaio has only scored one stoppage in the past decade, and that was of a tough but faded Matthysse. It seems unlikely that he’ll recover the power of his glory days against a full-bodied welterweight like Ugas. Though he was able to put Keith Thurman down in the opening round of their 2019 battle, that seemed more due to nerves and balance issues on Thurman’s part than it did to Pacquaio’s heavy hands. Though he’s been down a few times in his career, Ugas has never been stopped in 30 professional bouts. Boxing is never short on surprises, but this feels like a fight Pacquaio should walk away from with a hard-fought but clear-cut decision victory.

Ugas will push the aging legend to as far as he’s capable, but unless Pacquiao has finally reached his expiration date in the two years since he last saw action, his generational skill and unshakable will should see him through to decisive win on the scorecards.

Manny Pacquaio to WIN BY DECISION OR TECHNICAL DECISION: +110 (PointsBet)

Pick Pacquiao To Win By Decision

Fear not. Your time machine hasn’t malfunctioned. You have not entered a wormhole into an alternate 2011. For better or worse, you are safely grounded in the year 2021. This fight, however, is a relic from a previous decade. Not sure how this fight got made or, more importantly, why, but Robert Guerrero (36-6-1, 20 KOs) and Victor Ortiz (32-6-3, 25 KOs) are fighting each other so let’s have some fun.

Both of these guys are long past what would charitably be described as “shot” but sometimes those make for the best fights. The big question here then becomes who is more washed and you have to say, based on recent performances, that the honor goes to Ortiz. He’s been stopped in five of his six losses and has seemingly lost the ability to absorb anything more than a glancing blow. Guerrero has never been anything close to a power puncher but he should be able to exploit Ortiz’s non-existent chin here.

Pour yourself a beer, put some money on Guerrero to win by stoppage and be happily rewarded by both.

Pick Guerrero To Win By Stoppage

If Manny Pacquiao has lost a step and Yordenis Ugas is blinded by the bright lights of boxing’s biggest stage, we could be in for an ugly fight. If neither is eager to engage and exploit the other’s weaknesses we could see a stiff, tedious fight. This will only benefit Ugas and, potentially, bettors as well.

Fans hate draws in boxing, but they can be a gambling man’s best friend. It’s a long shot, like always, but you can see a situation where a slightly larger than expected decline on Pacquiao’s part opens the door for Ugas to bank a couple more rounds than he would otherwise

If you’re feeling frisky, betting on Ugas to make it a photo-finish isn’t as crazy as it sounds.

Manny Pacquaio and Yordenis Ugas fight to a Draw or Technical Draw: +1800 (PointsBet)