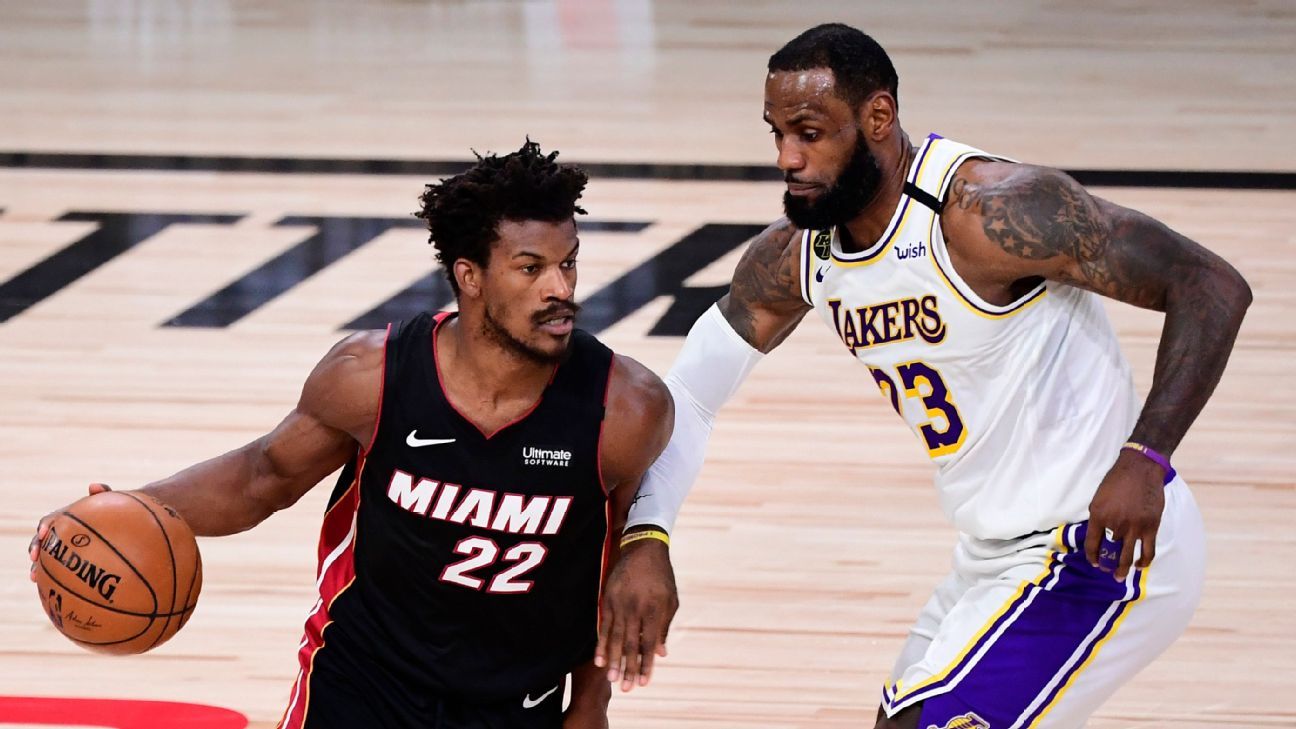 On the back of a Jimmy Butler triple double, Miami kept the series alive in game five with an incredible 111-108 victory over the Lakers. Game five was one of the greatest Finals games in recent history, are we set for another epic in game six?

Jimmy Butler refused to let Miami lose as he played an incredible 47 minutes and 12 seconds. Butler only had 48 seconds of rest on his way to scoring 35 points, 10 rebounds, 10 assists and 5 steals. He left it all out on the floor, becoming only the second player in NBA history to record multiple triple doubles in a Finals series. The big question is, can Butler continue to perform with this massive workload that’s placed on him. They were brave in their defensive execution late in the game throwing everyone at LeBron, forcing him to pass to Danny Green who has been cold for the majority of the series.

Whilst Butler did the heavy lifting, he got great support from the entire Heat team, with six of the seven Heat players to play in game five scoring double digits. Duncan Robinson stepped up to drop 26 points on 7-13 shooting from three point range, whilst Kendrick Nunn provided some crucial buckets as he scored 14 points on 54% shooting from the field. The Heat’s free throw shooting was imperative to the win as they shot 21/22 from the line, as Butler and Tyler Herro hit clutch free throws to seal the game. Miami hit a series high 14 three pointers made on 42.4% their best performance from three for the series. The Heat limited their rotation to just seven players as Kelly Olynk and Myers Leonard didn’t see any playing time, it’s likely that the Heat will continue to run with this shortened rotation, but is it sustainable?

Jimmy Butler as expected has carried the load scoring wise for Miami throughout this series, averaging 27 points per game throughout the series and has notched up massive tallies in his three games with 40, 22 and 35 point performances. With the Heat turning to a shortened rotation due to Goran Dragic’s injury, Butler has relished the added responsibility and continued to deliver. The Lakers thought they had figured out Butler putting Anthony Davis on him, but the Heat countered by using Jimmy Butler as the roll man which completely opened up the Heat’s offence. With the series once again on the line, expect Jimmy Butler to continue to be the man on the offensive side of the ball and rack up plenty of points.

LeBron’s 40 points, 13 rebounds and 7 assists weren’t enough to put the Heat away as they now face a tricky game six. Anthony Davis had 28 points and 12 rebounds, but the Lakers struggled to get any meaningful contributions outside of their star duo. Kentavious Caldwell-Pope was the only other laker to score double digits, the positive for the Lakers is once again it shows they’ve got so much margin for error in this series. Their biggest concern is Danny Green, Green has averaged just 6.8 points this series and is shooting a woeful 24.66% from downtown. After missing a wide open three that could have won the Lakers game 5 & the championship, expect there to be plenty of pressure on Green.

The Lakers once again won the rebounding battle (41-35) and the points in the paint (42-32), they played a pretty good game overall, it simply was the mistakes that Green and Markieef Morris made late in this game that cost the lakers. Expect Frank Vogel to make some defensive adjustments after Duncan Robinson lit it up from three point range in game five, LA can’t afford to let Miami’s role players get into a rhythm or they’ll be in some serious trouble. In a bright spot for the Lakers, Anthony Davis has confirmed he will play in game six after re-aggravating a heel contusion. The injury had him hobbling at periods throughout game five, however he was able to play through it and still perform at a high level. The Lakers will still have plenty of confidence knowing that if they play at their best, the Heat won’t be able to match them. If they can find a way to limit Jimmy Butler’s influence on the game and get their role players going, the Lakers will be lifting the Larry O’Brien trophy at the end of game six.

Although it came in a loss, LeBron was immense in game five as he continued his incredible streak of performances in potential closeout games. LeBron has a 79.2 win percentage in 49 closeout games. That ranks him number one for any player who has played in at least 25 closeout games. To pair with the winning, LeBron averages 28.8 points, 9.2 rebounds and 7.1 assists in closeout games, he goes to another level on the big stage. Miami doesn’t have an answer for LeBron, who is averaging 30 points per game throughout the finals, and has gotten better as the series has gone on. Whilst his over/under points line is quite high at 32.5, game five shows that LeBron will be at full throttle the entire game and he will be taking most of the shots down the stretch. With a chance to clinch his fourth ring, expect him to fill up the stats sheet and dominate on offence.

It’s a game six that nobody gave the Heat a chance of getting to, but they’re here on the back of some historic performances by Jimmy Butler. However, with still no Goran Dragic and Bam Adebayo being seriously hampered with neck and shoulder issues, it’s hard to see Miami forcing a game seven. The workload on Jimmy Butler has to eventually take a toll on him, because he is physically pushing himself to non-human levels.

The Lakers will be able to make some necessary adjustments defensively and if their role players can provide some contributions, they will be hard to beat. An interesting stat to watch out for in game 6, the team who has won the first quarter, has won the game. If the Lakers get going early, life will be hard for Miami. LeBron couldn’t quite pull it off in game five, but it’s impossible to see the King missing two closeout opportunities in consecutive games, the Heat have battled hard, but the Lakers class will show to close out the series, and win the championship.