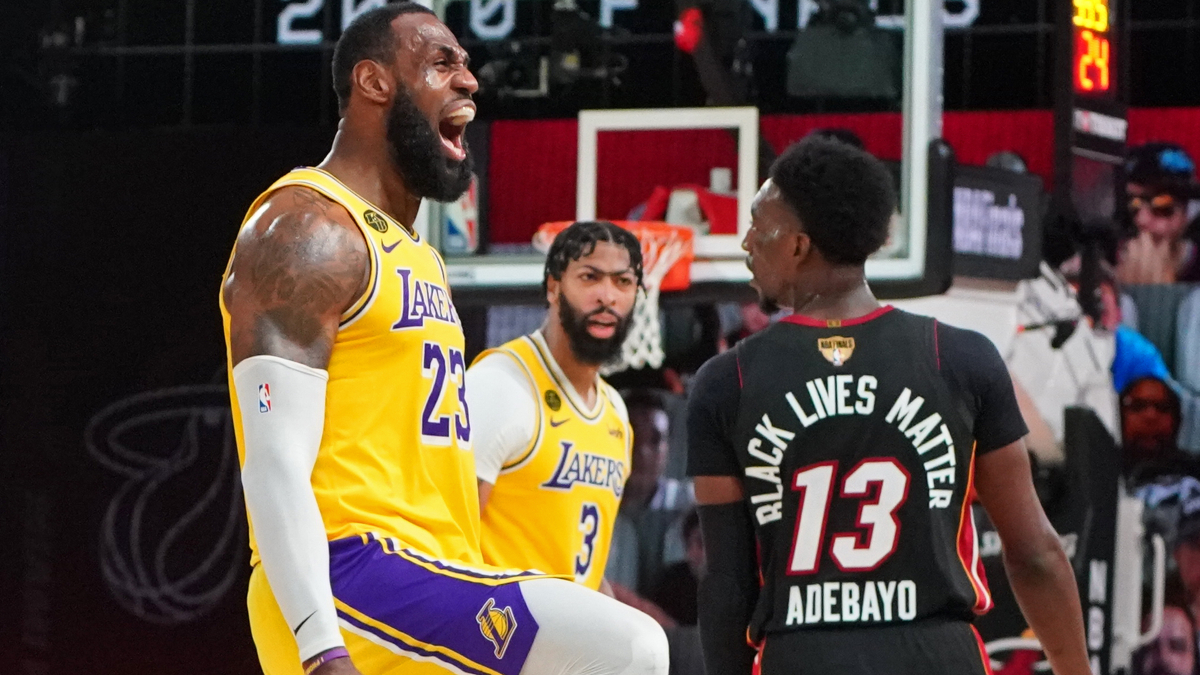 The Lakers come up big in the fourth quarter of game five on the back of Anthony Davis’ defence and now sit within one game of an NBA championship. Can LeBron and AD close out the series and win LA it’s 18th title? Or will Miami find a way to keep the series alive?

It wasn’t perfect, but the Lakers found a way to get the job done in game four. LeBron struggled in the first half scoring just 8 points in the first half, however he dominated the second half finishing with 28 points, 12 rebounds and 8 assists on 50% shooting from the field. Anthony Davis bounced back from a poor game three, registering 22 points, 9 rebounds, 4 assists and 4 blocks. He was an absolute brick wall in the paint on defence, blocking shots and deterring Miami shots at the rim throughout the entire game. Davis was a +17 in game four, a massive impact from the star big.

The Lakers got great contributions from its role players, with Kentavious Caldwell-Pope (15 points, 5 assists, 3 rebounds) and Danny Green (10 points) bouncing back from poor games in game four. Despite only scoring 2 points Rajon Rondo had a massive impact with 7 rebounds and 5 assists, giving the Lakers multiple second chance opportunities with some crucial offensive rebounds in the fourth quarter. For the fourth consecutive game the Lakers won the rebounding battle (42-39) and turned that into a scoring avenue outscoring Miami 12-7 on second chance points. The dominance of the Lakers big men has shown, with the Lakers holding a 20 point advantage overall this series on second chance points. LA also came to play on the defensive end of the floor in game 4, holding Miami to just 96 points, their lowest score of the postseason.

Although he only managed to perform in the second half, LeBron still managed to hit the over on his points mark. LeBron’s ability to get to the line and knock down free throws was crucial to him keeping the scoreboard ticking over as he shot 10/12 from the charity stripe. LeBron knows the Finals MVP is crucial for his legacy and he’ll be looking to put in a big performance to make sure he takes home the Bill Russell trophy. LeBron has also been an excellent performer in closeout games, in 48 closeout games in his career LeBron averages 28.5 points, 9.1 rebounds and 7.1 assists. He’s dominated closeout games in these playoffs with 36 points, 10 rebounds and 10 assists against the Blazers in the first round. In the conference semis against the Rockets LeBron chalked up 29 points, 11 rebounds and 7 assists. And to close out the conference finals against the Nuggets, LeBron had a monster performance with 38 points, 16 rebounds and 10 assists. LeBron was built for the big stage and he rarely fails to deliver, expect a massive performance from the King to close out this series.

Miami couldn’t quite execute down the stretch in the incredible manner they have all postseason long in game four and it’s now do or die for the Heat, can they find a way to keep the series alive? Jimmy Butler once again led the way for an undermanned Miami side with 22 points, 10 rebounds, 9 assists and 3 steals. Bam Adebayo was solid as he played through his shoulder and neck issues to post 15 points and 7 rebounds. Miami competed hard but with the talent gap between the two sides, Miami need to produce a near perfect game to beat this Lakers team that possesses two of the top five players in the NBA.

The Heat struggled to shoot the ball efficiently as they scored their lowest total this postseason, with just 96 points. Only Bam Adebayo (6-8) and Duncan Robinson (4-7) hit at above 50% of their shot attempts in Game 4. The rest of the Heat lineup combined to shoot 22-60 (36.7%) from the field. With the Heat drawing on a shorter rotation than they’re used to, they need to be knocking down shots at a much higher clip if they want to have any chance. After finally winning the battle inside in game three, Miami couldn’t repeat the performance in game four, as Anthony Davis wreaked havoc on both ends. The Heat scored 52 points in the paint in their Game three win, which was their highest total of the postseason. The Heat were outscored in the paint 34-32 in Game Four. The Lakers adjustments on how they defended Jimmy Butler worked, after scoring a career-best 26 points in the paint in Game three, Butler was held to just 12 points in the paint in Game 4. The Lakers went under the screens sent for Butler at every opportunity and it paid dividends for LA.

Whilst the Lakers have had the Heat’s number throughout this series, Tyler Herro’s historic achievements throughout this series have gone largely unnoticed. In game two Herro became the youngest player in history to start in the NBA Finals, at just 20 years and 256 days old. With his 3 three pointers in game four, Herro broke the record for the most three pointers made in a postseason by a rookie, with 45. Herro has performed strongly in this Finals, with tallies of 14, 17, 17 and 21 points, remarkable for a 20 year old in his first season. Herro has gotten better the longer the playoffs have gotten. In his last eight games Herro has averaged 20 points per game, the bright lights have not fazed the young star. The Heat has called upon Herro throughout the postseason and you can expect him to produce the goods again.

Whilst competing to their high standards from an effort point of view, Miami has been undermanned and outmatched all series long. The Lakers can smell blood in the water and they’ll be looking to close out the series, for their fourth consecutive 4-1 result in the 2020 NBA playoffs.