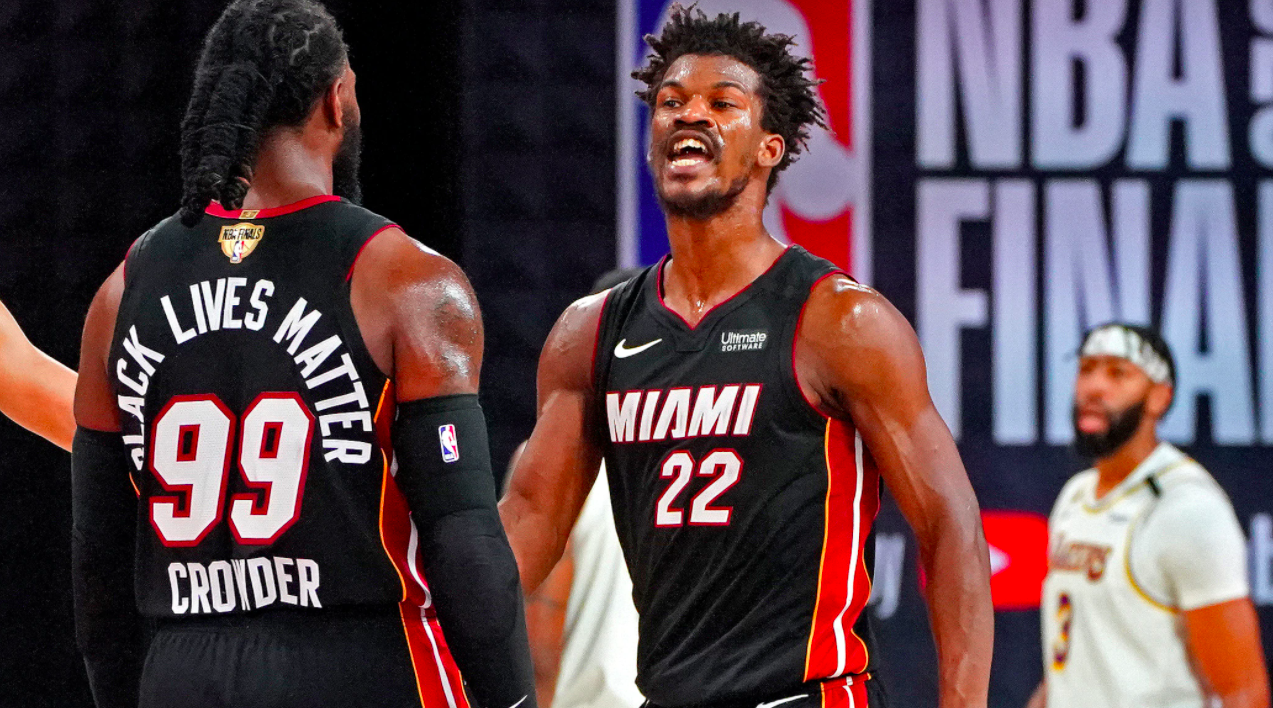 No Dragic, no Adebayo, no worries! A 40 point triple double from Jimmy Butler carried the Heat to an upset win in game three. Now we have a series! Can the Heat carry their momentum to tie up the series? Or will the Lakers pull away to a 3-1 series lead?

Just as the Heat looked dead in the water, Jimmy Butler played the game of his life to keep the series alive. Butler’s 40 point, 11 rebound, 13 assist performance was only the third time in NBA history a player had recorded a 40 point triple double in the Finals. Butler was unstoppable, shooting a remarkable 70% from the field. The Heat were finally able to contain Anthony Davis as the star big man was held to just 15 points and 5 rebounds, Davis also committed 5 turnovers to round off a horror night.

The Heat made some crucial defensive adjustments in game three to get a pivotal victory. They went away from their zone defence and were able to aggressively double team Anthony Davis, forcing him into foul trouble early in the game. While Butler was the star, the Heat got important contributions from Kelly Olynk (17 points & 7 rebounds), Tyler Herro (17 points), Duncan Robinson (13 points) and Jae Crowder (12 points & 8 rebounds). Miami’s starters outscored the lakers’ starters 89-51, this massive margin meant that Markieff Morris and Kyle Kuzma’s 19 point performances off the bench were in vain. The Heat are expected to finally get Bam Adebayo back for game four, which will add to the momentum the Heat have gained from their game three victory. Goran Dragic is unlikely to return at all for the rest of the series, but Jimmy Butler has shouldered more of the offensive load, and Kendrick Nunn has provided some serviceable minutes for the Heat to cover Dragic’s loss.

Miami has provided the goods in the total points market at over 104.5 in the last two games, which has seen the line jump up to 105.5 total points. Miami has scored over 105 points in fifteen out of their eighteen games. Miami have worked out what the Lakers are bringing defensively and have had no trouble scoring in the last two games. Whilst that line has increased the value looks just as good, especially with the momentum the Heat currently possess. Whilst it may seem crazy, Miami’s offence has become more dangerous without Dragic, as Jimmy Butler is forced to attack all game which creates plenty of opportunities for the Heat on offence. Miami shot over 50% from the field and over 90% from the free throw line for the second game in a row. They won’t have any issues hitting the over on 105.5 points.

The Lakers appeared to have one hand on the title after dominant victories in the first two games of the series, but after a poor showing in game three they face a Miami team that is clawing their way back into the series. The Lakers didn’t have an answer for a rampaging Jimmy Butler, whilst Anthony Davis struggled against Miami’s new defensive approach as he coughed up early turnovers and fouls. Davis wasn’t anywhere near his aggressive self in game three, and if he doesn’t get back to his work in the first two games, the door will be open for a Miami comeback.

LeBron was his usual self with 25 points, 10 rebounds and 8 assists, whilst the biggest positive for the Lakers was their bench contributions as Markieff Morris and Kyle Kuzma both poured in 19 points each. Despite a quiet night on the glass from Anthony Davis, the Lakers also continued their dominance on the boards winning the rebounding battle (43-37) and the offensive rebounds (11-3). The role players in the Lakers starting five are starting to become a concern with Danny Green scoring only 5 points in 39 minutes across games two and three. Kentavious Caldwell-Pope also struggles in game three, with just 5 points on 1-5 shooting from the field. So much went wrong for the Lakers yet they nearly pulled off a victory, it truly shows they’ve got a lot of margin for error in this series. Expect the Lakers to engage Davis in more pick and roll action, rather than in the post where the Heat were able to easily double team him.

While the spotlight has been heavily shone on Anthony Davis, LeBron James has gone about his work in a typically methodical way this series. The King has averaged 27 points per game in the Finals so far, scoring 25, 33 and 25 in the first three games without breaking much of a sweat. LeBron is yet to fully stamp himself on these finals with an iconic LeBron game, now that he sits as the Finals MVP front runner after Davis’ poor game three, expect LeBron to put on a show. Whilst his priority is obviously winning a ring, LeBron knows how important a Finals MVP is for his legacy. With the series back on the line in game four, LeBron will be out to send a statement. The over on his points total looks to be great value at 27.5 points.

Whilst it’s great that Miami has made this series interesting, it’s important not to get caught up in the hype. It took one of the greatest performances in Finals history from Jimmy Butler and a terrible performance from the Lakers for the Heat to barely scrape over the line. In their previous three series the Lakers have bounced back after a loss, with a 23 point win in round one against Portland, an 8 point win over the Rockets in the conference semi’s and a 6 point win against the Nuggets. They are yet to lose consecutive games this postseason.

LeBron and AD will be out to make amends for the loss in game three and we could get some iconic performances from the Lakers star duo.The Lakers will be making sure to snuff out any momentum that the Heat may possess early in this game, this postseason the Lakers are 11-0 when winning the first quarter, and 3-4 when losing the first quarter. So expect a big statement early from the Lakers. Four of the Heat’s five losses in the playoffs have come by double digit margins, so the Lakers to cover the line is a great choice.