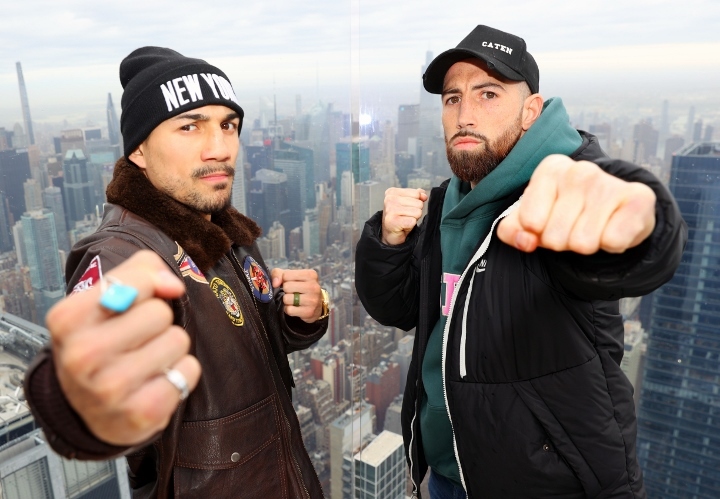 We have a busy boxing weekend in store, with big names in bouts on both sides of the pond. We’ve touched on our Warrington vs. Lopez prediction for the UK side of the day, and now we’ll turn our attention to the noteworthy fights in the US.

Below are our picks, predictions and best bets for Teofimo Lopez vs. Sandor Martin and Terence Crawford vs. David Avanesyan.

Teofimo Lopez (17-1, 13 KOs) aims to make his mark in a new division when he takes on Sandor Martin at 140 lbs this weekend in New York.

Lopez holds a regional title from the WBO. He won the strap in August when he defeated Pedro Campa in his first fight in the weight class. Lopez will be hoping that a win here gets him in line to fight for a world title within the same organization.

Martin (40-2, 13 KOs) last fought in April, when he lost to Jose Felix. Always a tough competitor and fighter, Martin still should pose some tests for Lopez, who is fighting for just the second time in this new division.

Lopez has made it a tradition to fight the same night as the Heisman Trophy winner gets announced. Normally it has been a bit of a high-profile fight and, should Lopez win, he’ll wear the football jersey of the new Heisman recipient. He will try to become victorious once again at a familiar location in the Hulu Theatre at Madison Square Garden. The card even will air following the Heisman presentation live on ESPN.

Lopez is a very big favorite at  -700, while Martin comes in as a close to 5-1 underdog at +450. Despite the wide lines, in the 140-pound division, this fight is much more enticing than the Pedraza one. Though Pedraza may be more technically sound than Martin, he has spent most of his career at 130 and 135. Lopez would almost certainly have been able to wear down Pedraza based on size alone. Lopez was seen as a huge lightweight and may eventually finish his career all the way up at 154.

Martin is a southpaw that has scored 13 knockouts out of his 40 wins. His two losses both are by decision. His size and stance alone may keep him in this for the full 12 rounds.

Though Martin may not be as technically sound as Pedraza, he still can box and box well. Not too long ago, he took it to Mikey Garcia and scored a huge upset. It’s a sound test for Lopez, who was outboxed by George Kambosos last November. Will we see that same fighter Saturday or will we see the man that shocked the world when he upset Vasyl Lomachenko in October 2020?

I do think Lopez comes out victorious, but at -700, it really isn’t worth your time. The decider has to be whether or not you think he will win by stoppage or by decision. I think that with all of the ESPN eyes being on Lopez once again, he will shine.

I know Martin has never been stopped, but this is a different type of fight. When he’s on, Lopez is one of the better fighters the sport has. I think he will prove that Saturday and get the stoppage.

The WBO welterweight championship is on the line as Terence Crawford (38-0, 29 KOs) aims to remind the world that he is still one of the best – if not the best – boxer in the world.

Crawford’s most recent fight was a little over a year ago when he beat Shawn Porter in a fight many people thought was close until Crawford decided to step on the gas and eventually stop Porter.

His next fight was supposed to be against Errol Spence. But after months and months of back and forth  – and some outlets even reporting that November 19th was the date the two would square off – the super-fight was never agreed to.

The fallout from the fight not materializing led to a multitude of finger-pointing and bad-mouthing. The end result was the fans were the ones who lost out. The fight technically still can happen, but it seems like both men have moved on – at least for now. And thus we get Crawford vs. David Avanesyan instead.

“Bud” will face Avanesyan (29-3-1, 17 KOs)  in a BLK Prime PPV from his hometown of Omaha, Nebraska. Avanesyan’s last fight was against Oskari Metz back in March, when he defended his EBU welterweight title.

Crawford comes in as a massive favorite at -1200. Avanesyan is currently priced as a massive +650 underdog. Stranger things in boxing have happened, but if you look at both, you can see why the odds are where they are.

Crawford is the better technical fighter. He has shown he can box your head off from an orthodox stance. If he decides to switch to southpaw, he can beat you up in that stance for good measure too.

Crawford also has a “mean” aggression in him. He can turn it on at any time. For reference, in his last fight with Porter, his trainer told him that he was losing the fight in the 10th round. Crawford nodded and went on to stop Porter in the very next round.

Lastly, Crawford has the reach advantage as well. He checks every box in this fight. It seems like all but a formality.

If you look at each fighter’s respective resume, there also is a vast difference there, too. Avanesyan’s best win came against Josh Kelly. His losses aren’t bad, Crawford has directly beaten two fighters who have  beaten Avaneysan: Egidijus Kavaliauskas and Andre Klimov. You would think that if Crawford fought Lamont Peterson, who also bested Avanesyan, Bud probably would have won that bout as well.

The only chance Avanesyan may have is if Crawford’s ring rust comes into play and he shows signs of a continued decline in his defensive game. Crawford used to be more defensively responsible, but in his last few fights, he has gotten hit a lot more than he did earlier in his career.

Maybe it stems from Crawford’s age or because he has become more offensive-minded. Either way, it creates an opening for other fighters that at one time never appeared to be there. The issue here is that I simply don’t think it will be Avanesyan who will be the opponent to take advantage of this.

I like Crawford to get the stoppage. But at -750, there is no value in that pick either. If we go a layer deeper, I like Crawford to get the stoppage between Rounds 5 and 7, so I think the best bet here is to take the under, which currently sits at 7.5 rounds. The last time Avenysan was stopped was against “Mean Machine,” and that was in the 6th round.

I like the under a lot. I think there is value in taking Crawford to win between Rounds 1-6, too. It’s a matter of when, not if.

Crawford vs. Avanesyan prediction: Under 7.5 rounds (-115 at  DraftKings Sportsbook)