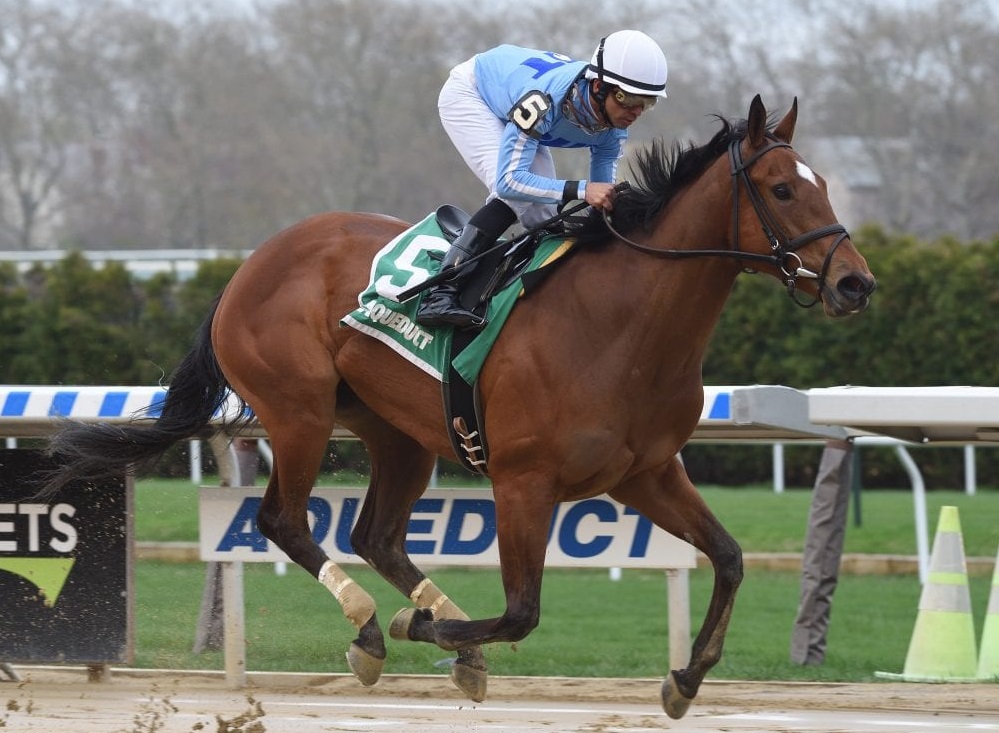 Belmont Park is the center of the horse racing world this Saturday. The New York track hosts eight of the 17 stakes races with at least $100,000 in prize money. Many of the Belmont races showcase New York talent and should offer horseplayers some good betting value.

Race 8 is the $150,000 Mohawk Stakes for horses foaled in New York state.  A field of seven will run 1 1/16 miles on Belmont’s inner turf course. The course’s tighter turns give speed horse a slight advantage.

THERAPIST (PP: 5 ML 6-1) seems to like racing at the New York track as he has five trips to the winners’ circle in nine tries. He has three wins in 10 races elsewhere with four thirds. He’ll have to overcome the small speed advantage with his closing style.

RINALDI (PP: 6 ML 3-1) will challenge for the lead and try to win the race from gate to wire, something he’s done is his last two races and three of five. He’s been off since September 4th, but his workouts say he’ll be ready when the gates open.

SOMELIKEITHOTBROWN (PP: 7 ML 9/5) is likely to be the post-time favorite. He’s struggled with traffic issues in his last two races. He likes the distance with a win and three seconds in four outings and has a second and third in two at Belmont.

CROSS BORDER: (PP: 8 ML 5/2) is taking a big class drop from a Grade I to a non-graded stakes race. The last time he ran at a similar level he won by 6 ¼ lengths. However, he’s not taken to the Belmont track too well in his five races, just a pair of seconds.

CLICK HERE TO BET ON THE MOHAWK STAKES AT TVG.COM

The ninth race is the $125,000 Iroquois Stakes for fillies and mares foaled in the Empire State. It’s one of the fattest fields of the day with 10 battling it out over 6 ½ furlongs. Speed is the key as more than 80% of the winners at the distance and surface usually race in the top two from the go.

NEWLY MINTED (PP: 1 ML 5/2) has finished in the money in 10 of 11 lifetime starts. She has six wins, three thirds and a second in those 11 starts, including one win in two races at Belmont. She won her last start and trainer Linda Rice wins after a win at 24%.

FAIR REGIS (PP: 3 ML 9/2) ran the highest speed number at the distance, meaning he has the most potential in the crew. The jockey and trainer duo of Irad Ortiz, Jr. and Rob Atras have been hot, winning their last three together.

COLLEGEVILLE GIRL (PP: 6 ML 15-1) was the bettor’s top choice in her last start at PARX but finished third. Trainer Richard Vega snaps back at 21% the next time he races a beaten favorite. She raced once on Belmont’s main track, winning with one of her best efforts.

TIMELY TRADITION (PP: 9 ML 5-1) has won four of her last five race, she had some serious traffic problems in the non-wining effort. She’s raced at Belmont 10 times with three wins, and a pair of seconds and thirds.

CLICK HERE TO BET ON THE IROQIOIS STAKES AT TVG.COM

Race 10 is the showcase race of the day with more New York foaled horses running in the Empire Classic, 1 1/8 miles on the main track. With only two races, meet to date at the distance, there isn’t enough history to identify any advantages.

BUFF (PP: 2 ML 5/2) has been mister bad in his last two races, finishing way, way behind the winners. Trainer John Kimmel is dropping the six-year-old into a lower level race. Kimmel doesn’t run too many in non-graded company but hits at a strong 34% when he does.

SEA FOAM (PP: 7 ML 4-1) has won two in a row, both racing on the lead. He ran some of his fastest fractions in his last race, which is usually a positive for the next outing. He’ll be hard to pass if he can get on the lead and hold the lead in the stretch. He’s won the last four when racing to that script.

OUR LAST BUCK (PP: 1 ML 15-1) has found his form in 2020. He has three wins and two seconds in six starts compared to one second in five 2019 efforts. He should be at/near his best in the third start following a layoff. At 15-1 morning line odds, looks as good as any of the rest.

FUNNY GUY (PP: 3 ML 2-1) ran second in his last race, a sprint (less than 1 mile) and he finished fourth in a spring before that. Today, he is running a route. Trainer John Terranova, II wins at 18% when running the sprint-sprint-route cycle.

CLICK HERE TO BET ON THE EMPIRE CLASSIC AT TVG.COM