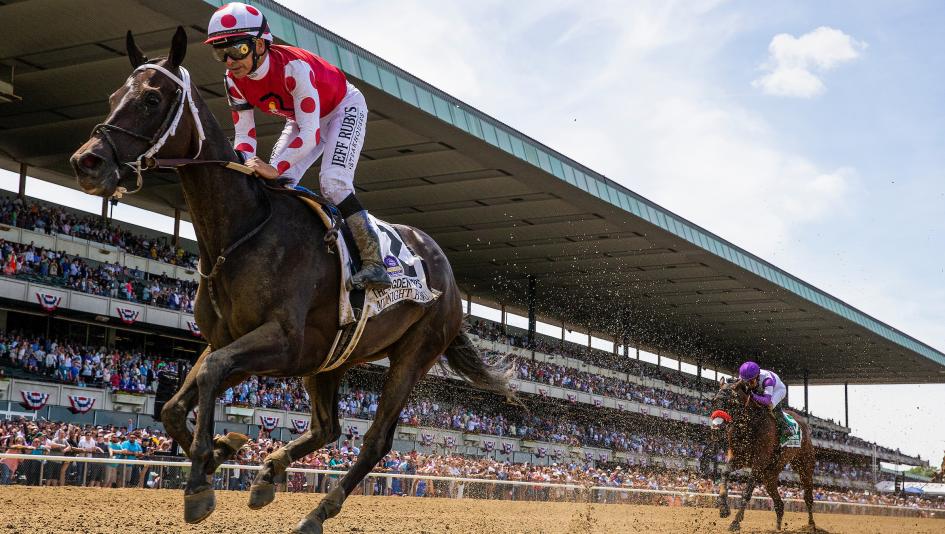 There is a lull in stakes racing before the upside down, maybe inverted, we’ll go with twisted Triple Crown starts next Saturday with the Belmont Stakes. It’s usually the final leg but has been repositioned to first thanks to COVID-19 rearranging the horse racing calendar.

There are only five stakes races with $100,000 in prize money. Unlike weeks past where we focus on a single track, we’ll hopscotch around the country and focus on three.

A skinny field of six horses will run 1 1/16 miles on Belmont’s main track. The one-turn race heavily favors horses that are fast out of the gate. Twenty-three of the 27 races at the distance during the fall meet were labeled early speed. The average winner ran first or second after the first quarter-mile and was on the lead by the half-mile marker.

OLLIE’S CANDY (PP: 5 ML 8/5) is normally not the fastest horse out of the box; although, she tried to win on the lead, from gate to wire. Ultimately, she finished second, missing a trip to the winners’ circle by a head. Today’s distance appears to be to her liking as she has two wins, a second and third in four races.

POINT OF HONOR (PP: 2 ML 2-1) usually comes from the back of the pack. So, she’ll need to overcome the track bias to wear the Ogden Phipps Stakes crown. However, she’s likely to be a top-three finisher. She has three wins, three seconds and a third in eight outings.

GOLDEN AWARD (PP: 6 ML 7/2) is usually near the front all the way around the track. Typically, she is third after the opening quarter-mile and second or third after a half-mile. She’s finished first or second in eight of her last 10 races. She quit and finished fourth in the pair of out-of-the-money races.

PINK SANDS (PP: 1 ML 6-1) likes running at Belmont, just not winning. She’s raced there five times with a pair of seconds and three thirds in five starts. The five-year-old mare might finally get over her Belmont zero as she rides the rail, which wins at 23% for the distance and surface.

A dozen horses will run a long way, 1 ½ miles on turf. That’s grueling. It’s also a very difficult distance and race to handicap, which is good because it opens the door for longshots to find their way to the front.

ARKLOW (PP: 5 ML 8/5) is the oddsmaker’s top choice probably rightfully so. The six-year-old son of ARCH recorded the top speed figure in two of his last three races and tied for second best in the other. He’s a hard charger that makes his move late. If he’s within 4 or 5 lengths of the lead coming out of the final turn, it will be difficult to hold him off.

TIZ A SLAM (PP: 6 ML 7/2) has raced 1 1/2 miles on turf nine times and it’s been all or nothing with four wins and nothing else. Horseplayers should know his chances to find the winners’ circle early. If he’s first after a three-quarters of a mile, he’ll be hard to pass and he shouldn’t have too much competition for the lead.

HE’S NO LEMON (PP: 4 ML 15-1) has not raced since September but trainer Graham Motion wins at 20% with horses returning to work after rests of 90-days or more. He’s finished in the top three in his last six starts, including second in his last and only run at 1 1/2 miles on turf. If he can handle the step up in class, 15-1 odds could be a nice overlay.

ADMISSION OFFICE (PP: 12 ML 3-1) looks like one of the strongest contenders on paper; however, he’s hit the tap first just once in his last 10 races. He’ll be chasing the leaders late, giving his backers hope, but his history of not closing the deal makes it hard to see him finishing better than second or third.

SKY PROMISE’s (PP: 2 ML 20-1) trainer, Robertino Diodoro, doesn’t enter many into the Graded Stakes company, but wins at 28% when he does. Diodoro has been hot to start the current Churchill meet, winning five of 11 starts and two of his last five with jockey David Cohen.

DESERT LAW (PP: 1 ML 6/5) hasn’t raced in almost a year. However, he is training well and is dropping in class. Trainer Carla Gaines isn’t successful with horses returning from an extended break, winning at just 4%. Bringing the six-year-old back at today’s distance is smart move as DESERT LAW has four wins and three seconds in nine races. If he’s ready to go, he could live up to morning line favorite status.

PRINCIPE CARLO (PP: 5 ML 3-1) has torn up Santa Anita with three wins and three seconds in seven main track efforts. He just didn’t run in the lone off the board finish. He’s in top form and just a head away from a four-race winning streak.

If not the first two, then…

TIGER DAD (PP: 2 ML 3-1) has finished first, second or third in his last 10 races, including a win, two seconds and third in four Santa Anita races. He’s faded late in his last two starts; so, we’d like to see an improvement in late race form before moving him up the board.