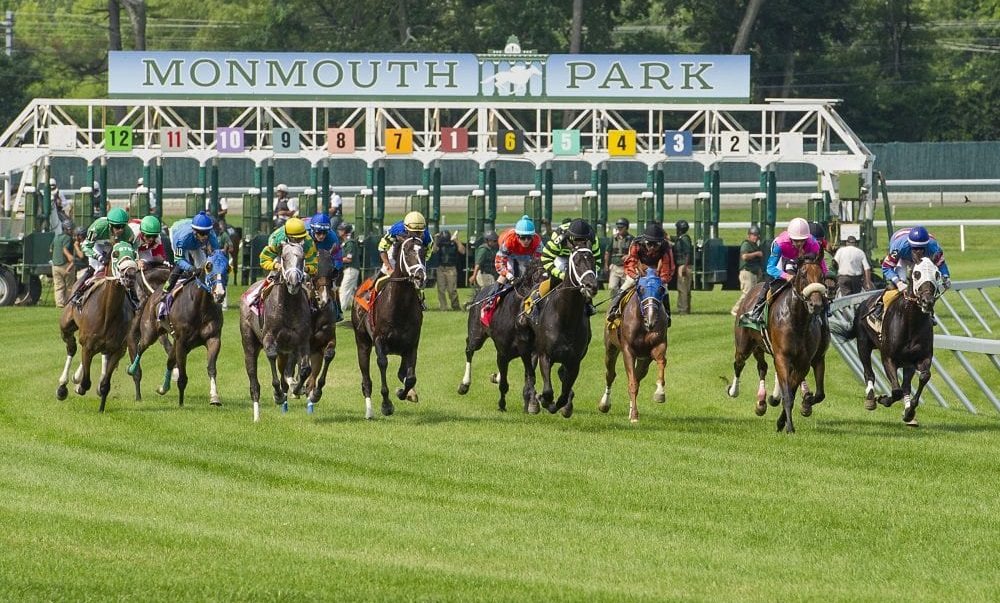 A winner’s share of $1 million and a ticket to the September Kentucky Derby await the winner of Saturday’s Haskell Stakes at Monmouth Park in Oceanport, New Jersey. There are 14 races on the card and we have a full preview and betting picks for some of the key races below!

The Grade I, United Nations Stakes leads into the Haskell. Nine will slug it out over a long 1 3/8 miles over Monmouth’s turf course in race 11. There have not been enough races at the distance and surface to determine any advantages. However, closers have been king in the six turf races of a mile or more.

ARKLOW (PP: 1 ML 5/2) is the morning line favorite and is making the classic third start after a layoff, a 29% angle for trainer Brad Cox. However, the United Nations will be his second race in a week. It’s unusual for a trainer to turn a horse around that fast. ARKLOW finished out-of-the-money in the two races with the shortest time between starts. The lack of time off is concerning, so we are going to fade ARKLOW for the win, but can see him filling out exacta, trifecta, and superfecta tickets.

STANDARD DEVIATION (PP: 2 ML 7/2) finished an ugly sixth by 2 ¾ lengths in his first race since running for $10 million in Qatar, where he finished second. Prior to his trip to Doha, the four-year-old finished in the top three in five of six starts, including two wins in two Monmouth grass efforts. He looks like a horse for the course as he has just one win in 10 races away from Oceanport.

MUGGSAMATIC (PP: 3 ML 8-1) is just 1 ¼ lengths and a head from winning his last six races. Makes you wonder why he is 8-1 and not lower. He won his last race on June 6th, which was his first race since February 17th, and gets a jockey upgrade to leading rider Paco Lopez, who has won at 38% meet to date.  The son of ANY GIVEN SATURDAY has also been strong at Monmouth with three wins and two thirds in seven races.

AQUAPHOBIC (PP: 5 ML 9/2) is always on the verge at the end and is probably the most consistent horse in the field, but just seems to fall short before the announcer calls his name at the wire. Horseplayers can expect another solid effort from the seven-year-old, but he is unlikely to find the winners’ circle.

PARET (PP: 9 ML 6-1) recorded the highest last race speed figure and the best number in the last two races. Double highest numbers can be an effective handicapping angle. PARET will have a chance to lead the field from gate to wire as a potential lone speed horse. If he can run the first half-mile in more than 49 seconds, it could be a wrap.

BET NOW: CLICK HERE TO BET ON THE UNITED NATION STAKES AT TVG.COM

A field of seven will run 1 1/8 miles for the Haskell crown in Monmouth’s 12th race on the card. Speed has dominated in the limited number of races during the current meet. The average winner raced second after the first quarter mile and was in charge by the ½ mile marker. Horses that hug the pace have fared well in the past 10 Haskells, winning seven of 10.

Heavy favorites have also been prevalent on the way to the winners’ circle. Six of the last seven post-time favorites of 6/5 or less lived up to the hype. AUTHENTIC (PP: 2 ML 4/5) is the oddsmaker’s choice and we would not be surprised to see AUTHENTIC at 3/5 or lower by the time the gates open at 5:46 p.m. eastern.

Trainer Bob Baffert’s horse won his first three starts and is coming off a second-place finish on the Grade I, Santa Anita Derby. AUTHENTIC typically gets to the front early and then runs away late. He got off a step slow in the lone non-win and could be in command after a half-mile.

DR POST (PP: 1 ML 5/2) is the only horse to hit 100 on the speed gun twice. He popped a triple-digit in his last race and first start after a two-month rest. Normally, we’d expect horses to take a step forward in race number two off the bench, but DR POST slipped in round two in his previous and only other two race cycles. Despite the noticeable drop off, he managed to win.

JESUS’ TEAM (PP: 3 ML 15-1) is the longshot with the running style needed to pull off the upset. He should hug the leader(s) and try to close the deal as the horses come out of the final turn. The Haskell will be his third race following a short rest. He improved race to race in the first two go around the track, dropping his final 1 mile time by nearly a second. That’s usually a good sign for the next race.

NY TRAFFIC (PP: 7 ML 7/2) hasn’t raced since May 23rd when he finished second to MAXFIELD in the Grade III, Matt Winn Stakes at Churchill Downs. His training sessions leading into the race have been strong and he has run well fresh, with a second and a win in his last two first starts following a layoff.

BET NOW: CLICK HERE TO BET ON THE HASKELL STAKES AT TVG.COM

The day of sun and fun near the Jersey shore ends in the 14th with the Grade III, Molly Pitcher Stakes. We’ve got 11 fillies and mares racing 1 1/16 miles on the main track. So far, the two races at the distance and surface were won by speed horses.

We see this as a two-lady race for the big check.

SHE’S A JULIE (PP: 1 ML 5/2) has all sorts of arrows pointing towards the winners’ circle. She ran the highest last race speed figure, dropping slightly in class from a Grade I win, and should be close to peak form in her third start off the break. She’s won nearly half her races on turf with five wins in 11 tries.

ROYAL FLAG (PP: 2 ML 3-1) has won three of her four starts. Her lone miss was in her debut where she hit the tape third by just 1 ¾ lengths. Since then, it’s been nothing but winner’s checks. The big question is whether she can handle the major step up the competition ladder. However, trainer Chad Brown is good at picking his spots for his horses, winning graded stakes at an impressive 24%.

VAULT (PP: 5 ML 9/2) is another that is going to try the Graded level for the first time. He’s run on a fast track 10 times and finished in the top three nine times. Impressive! He’s been stronger at the distance with five wins, two seconds and a third in eight efforts. If he can run a similar race as his last, a second-place finish, it could equal a similar result.

HOROLOGIST (PP: 11 ML 5-1) has been about as bad as a horse can be in four of her last five starts. She didn’t finish her last race, finished sixth by 5 lengths, second by a nose, fifth by 6 ½ lengths and ninth by 12 lengths in her last five, from most recent back. Why? You might be asking. She’s raced four times at Monmouth and won them all. Like a car wreck, you cannot look past that Monmouth record.

BET NOW: CLICK HERE TO BET ON THE MOLLY PITCHER STAKES AT TVG.COM