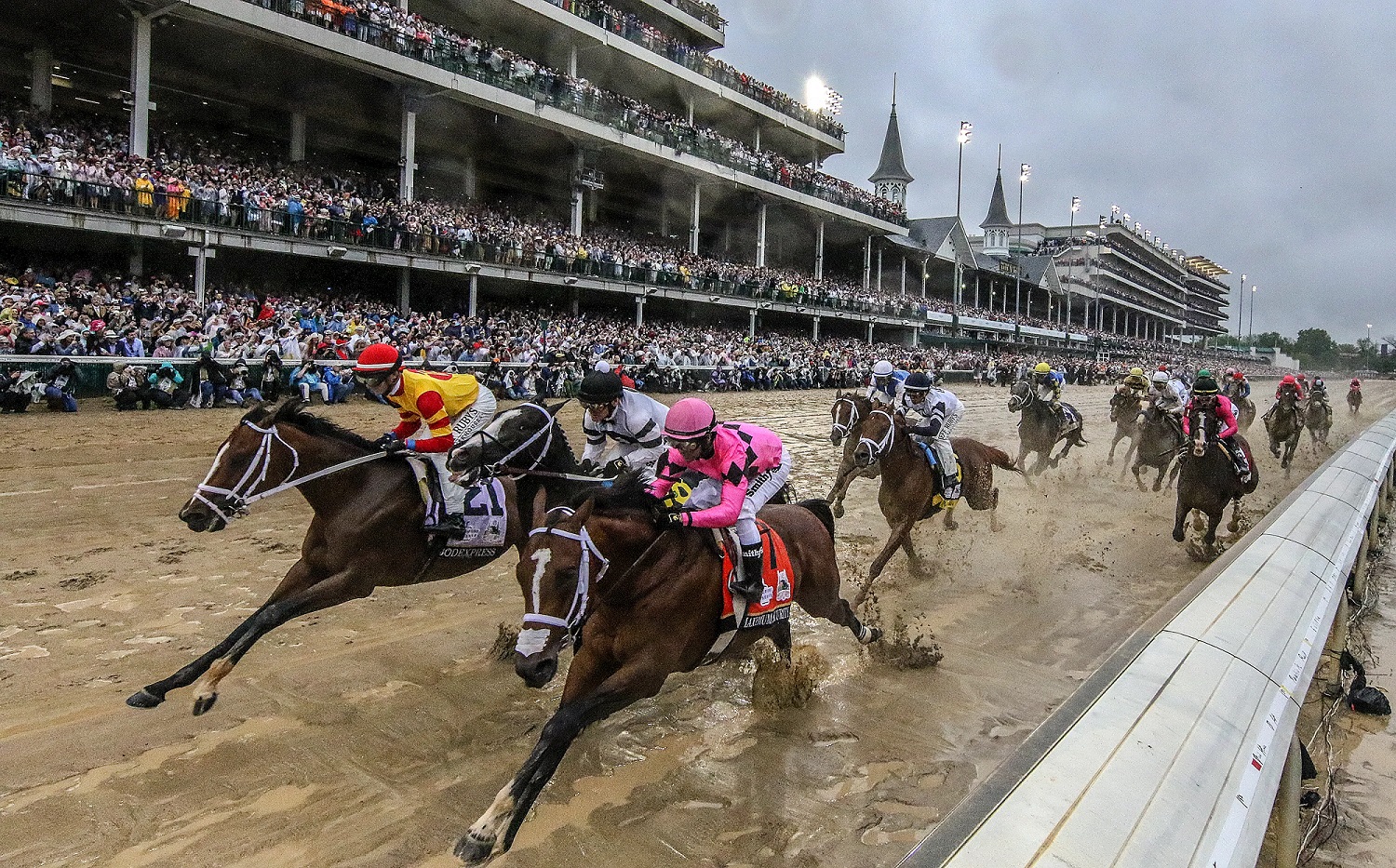 You’ve probably been to concerts or fireworks shows, both max out the energy at the end with encores or grand finales. Although the show isn’t over, the Road to the 2021 Kentucky Derby is down to the last moments before most exciting two-minutes in sports.

There are only five qualifying races left for horses to earn their way into Churchill Downs to run for the roses. Three of the five races are this Saturday, and they are the win and you are in variety. The first to the tape in the Wood Memorial Stakes at Aqueduct, the Santa Anita Derby at Santa Anita and the Blue Grass Stakes at Keeneland will each earn 100 Derby qualifying points. Second place gets 40 points, and based on the current leaderboard, more than likely will saddle up in Louisville.

By Saturday night, three-quarters of the 2021 Kentucky Derby field will be set. We’ll start from the east coast and make our way west to see who we believe will make the trip to Churchill Downs for the first Saturday of May.

A field of nine will race 1 1/8 miles on Aqueduct’s main track. Meet to date, there have been 35 races at the distance/surface with early speed types winning at 60%. Because of the quick first turn, the distance tends to favor inside horses with the rail (#1 horse) winning at an outsized 23%.

BROOKLYN STRONG (PP: 1 ML 6-1) wins the draw and gets to ride the high win rate rail. His won his last race by a neck with the highest last race speed figure, taking the Grade II, Remsen Stakes crown at Aqueduct. Like today, the Remsen is 1 1/8 miles on Aqueduct’s main track. However, the course was sloppy and wet that day and his speed number is way above anything BROOKLYN STRONG produced in his previous three starts. If he can run the same race today, he can win. The concern is he likes a wet surface and reverts to his fast track figures.

RISK TAKING (PP: 4 ML 5/2) is undefeated on Aqueduct’s main track in two starts. It’s not surprising as trainer Chad Brown destroys Aqueduct’s dirt course winning at 37% and finishing in the money at more than 70%. Those numbers are astounding. He’s got the breeding to go long and has proven he can handle two turns.

CROWDED TRADE (PP: 2 ML 4-1) is another Brown trainee. CROWDED TRADE will run a mile or more for the second time. Brown scores at an amazing 48% with horses in their second route races. Despite Brown’s track record, his horse hasn’t run a race with two turns and looks a mile or less might be a better fit, much like his pappa, MORE THAN READY, who had morse success as a sprinter.

PREVALENCE (PP: 6 ML 3-1) could well be the best horse in the race. He’s undefeated in two starts at Gulfstream Park and is well-bred for longer races. However, he also must prove he can win in two-turn races and, since Gulfstream’s times tend to be a little faster than Aqueduct’s this time of year, that his form transfers from Miami to New York.

CLICK HERE TO BET ON THE WOOD MEMORIAL STAKES AT TVG.COM

Nine colts will take on Keeneland’s dirt course for 1 1/8 miles. It’s tough to get a read on any running style or post position advantages as there were only a handful during the five-week fall meet. However, speed horses wearing a four or higher made it to the winners’ circle five of five.

HIGHLY MOTIVATED (PP: 3 ML 3-1) is yet another Chad Brown horse running in its second race of a mile or more (48% win rate for the trainer). He’s also another horse that will have to show he can handle two-turns, which is a common test for young horses. HIGHLY MOTIVATED ran the highest, last race speed figure in the Gotham Stakes versus some who are running in the Wood Memorial, where he finished third. Perhaps Brown believes HIGHLY MOTIVATED has a better chance in Miami than New York?

ESSENTIAL QUALITY (PP: 4 ML 3/5) wins this race impressively and he is the unquestionable favorite heading into the Kentucky Derby with LIFE IS GOOD sidelined due to injury. As they say, ESSENTIAL QUALITY has done all that’s been asked of him. He’s won his first four races in a variety of running styles and track conditions. Until he loses, ESSENTIAL QUALITY is the one to beat.

HIDDEN STASH (PP: 1 ML 20-1) should be rounding into peak form as he is making his third start after a layoff. The last time he ran a third race in a three-race cycle, he broke his maiden (first win) in his only race at… Keeneland at 1/16 miles on the main track. As a closer, he should love the extra distance in the Blue Grass.

UNTREATED (PP: 2 ML 10-1) is only making his third start, which means he has the most potential upside. He won his last race, getting the maiden score by 8 ¾ lengths at Tampa Bay downs with one of the better speed figures for this crew. It could have been better as he was hand ridden in the stretch. UNTREATED won’t be able to get away without giving it his all here, giving us an idea of his full potential.

CLICK HERE TO BET ON THE BLUE GRASS STAKES AT TVG.COM

A group of 10 are going to race 1 1/8 miles on Santa Anita’s main course. It feels like we’ve seen this race before as many have faced off previously. We don’t expect much to change but a few new challengers will try to mix things up.

ROCK YOUR WORLD (PP: 3 ML 4-1) started his career winning his first two starts on grass. He’s switching to dirt for the first time, a 22% winner for trainer John Sadler. His pedigree hints that the surface which won’t be a big deal as his sire, CANDY RIDE was undefeated in six races on dirt, including the Grade 1 Pacific Classic at Del Mar.

MEDINA SPIRIT (PP: 7 ML 5/2) has two wins and two seconds in four races. However, he’s only lost to one horse, LIFE IS GOOD, who would have been on of the pre-Kentucky Derby favorites had he not been injured. Aside from LIFE IS GOOD, he’s beaten four of the other nine in the field. There is very little reason to believe one of the other four with turn the tables here.

THE GREAT ONE (PP: 9 ML 8-1) is the only horse in the field to reach triple-digits on the speed gun and he has done it twice, including one at Santa Anita. In his last effort, he wasn’t anywhere near MEDINA SPIRIT at the finish line, but THE GREAT ONE had a rough start. This will be his seventh race without a sustained rest, so he could be tired. However, if he can run back one of those 100+ speed figures, he’s probably the winner.

DEFUNDED (PP: 10 ML 8-1) is trained by Bob Baffert, who needs no introduction to horseplayers. DEFUNDED is coming off his maiden victory in his second try and his first race since last August. Baffert is stretching his horse out to a route (1 mile or more) for the first time. The all-world trainer has two strong angles for him at work here; Baffert wins at 32% the first time his horse runs 1 mile or more and at 31% in second starts following time in the barn.

CLICK HERE TO BET ON THE SANTA ANITA DERBY AT TVG.COM