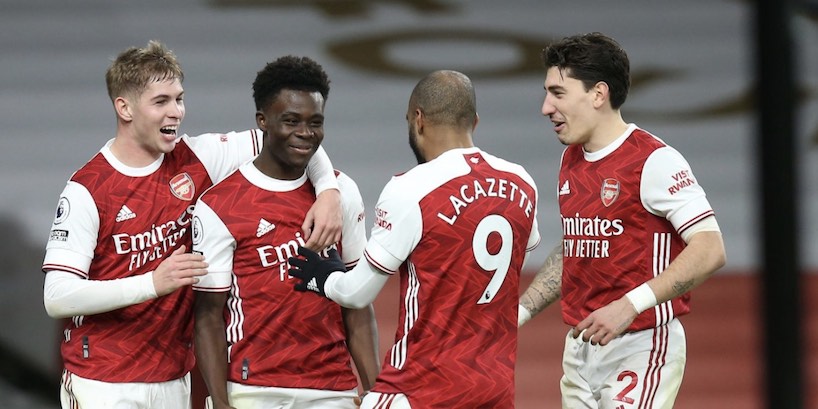 The Premier League action continues with Matchday 34 featuring some huge clashes. One point separates Man City competing for the title and one point separates Everton and Burnley in the battle for safety. There’s crucial games everywhere this weekend and as always, we’ve got you covered with our best picks!

The first fixture of Matchday 32 sees Manchester United travel to the Emirates, with the Gunners looking to keep the pressure on Tottenham. Arsenal have kept their hopes of finishing in fourth place alive after a dramatic 4-2 win over Chelsea during the week, the win sees Arsenal in fifth place tied on points with fourth placed Tottenham. For the second time this season Manchester United were humiliated by Liverpool  with a 4-0 loss at Anfield during the week, adding to the 5-0 defeat against the Liverpool earlier in the season.

Nothing has gone right for United all season long, but the form of Cristiano Ronaldo has been remarkable, scoring 15 goals to be third in the golden boot race. Ronaldo is in doubt for this weekend after the death of his child earlier in the week and is in doubt to face Arsenal. If Ronaldo doesn’t play, the Red Devils have next to no chance in this clash. Despite potentially being without their top goals scorer, Manchester United’s biggest concern is their defence. United have conceded the ninth most goals in the Premier League this season (48) and have conceded fourteen goals in their last six games, including two against 20th placed Norwich last week.

Arsenal have had the better of Manchester United in their recent matchups with a 3-3-1 record in the last seven Premier League fixtures between the two sides. Arsenal have a plethora of attacking weapons to stretch a struggling Manchester United defence, and should keep themselves right in the mix for fourth place with a win on Saturday.

Chelsea rotated their side heavily in their midweek fixture against Arsenal and it lead to a surprise 4-2 defeat against the Gunners. Despite the defeat, Chelsea are well a truly solidified in third place having won six of their last eight games. West Ham have been unable to translate their remarkable performances in the Europa League to the Premier League having won only one of their last four games. The quality of opposition West Ham have failed to beat is a big concern. The Hammers have lost to twelfth placed Brentford and drawn to eighteenth placed Burnley in their last two games.

With both clubs being elite in the front third, this game will largely be decided about which team will be stronger in defence. Chelsea have the number three ranked defence in the league and should be able to control that aspect of the match better than the Hammers. Chelsea will be looking to respond after a frustrating performance during the week and have won two of their last three games against West Ham, expect a big performance from Chelsea.

Sunday morning sees a Merseyside Derby with title and relegation ramifications as Liverpool and Everton go head to head at Anfield. Liverpool are sitting in second place just one point behind reigning champions Manchester City, while Everton are in seventeenth just one point outside of the relegation zone.

After Burnley’s win over Southampton on Thursday, Everton are on the brink of relegation and are in desperate need of a derby win over Liverpool. The Toffees are 3-2-11 across their last sixteen Premier League games, while Liverpool have a near polar opposite record in that time at 12-3-1. Everton’s slump this season has come as a result of their horrendous defence. The Toffees have conceded 55 goals this season, the fifth most in the Premier League. Everton’s hopes of turning around their defensive struggles won’t be high coming up against the best attacking team in the Premier League who have three of the top four goal scorers in Mo Salah (1st), Diogo Jota (3rd) and Sadio Mane (4th).

Liverpool have well and truly had the wood over Everton have in the Merseyside Derby across the last eleven years. Liverpool have a 9-12-1 in the last 22 Merseyside Derbies in the Premier League. The Reds took care of Everton earlier in the season with a 4-1 away at Goodison Park, and after a 4-0 win over Manchester United during the week, Liverpool will be full of confidence they can continue their goal scoring form.