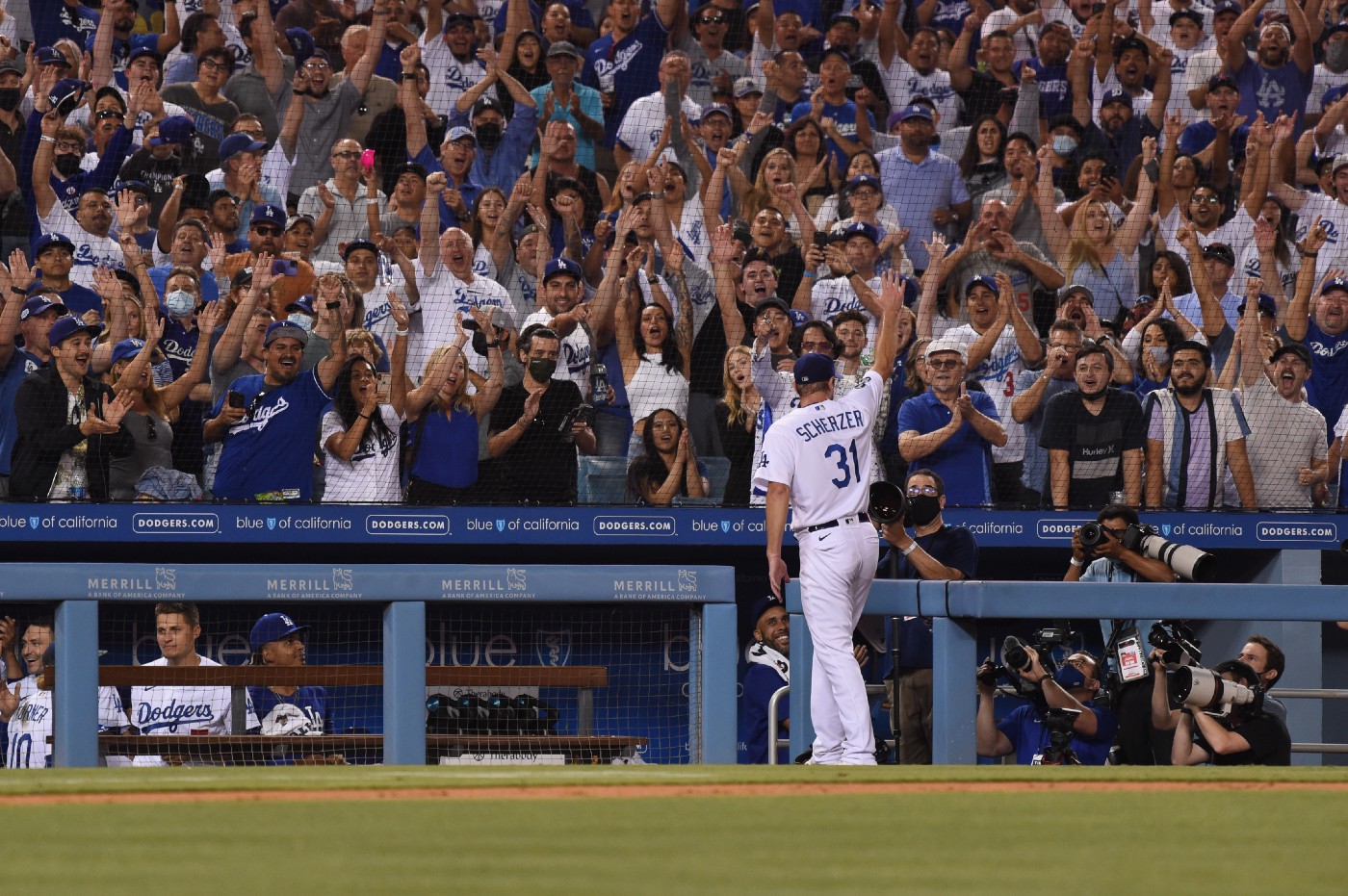 Two of the preseason World Series favorites square off tonight on Sunday Night Baseball, in what’s shaping up to be an important game for both.

Despite winning 7 of their last 10 games, the Los Angeles Dodgers sit 4 games behind the upstart San Francisco Giants in the NL West. Three-time Cy Young winner Max Scherzer takes the mound for the reigning champs and will look to complete the series sweep against the Mets.

Scherzer has been in his typical ace form. His 2.67 ERA has been driven by a sterling 5.62 K/BB and 15.9% swinging strike rate. His peripherals suggest this performance is legit (3.37 xFIP, 2.94 SIERA), even in his age-37 season. Mad Max hasn’t lost a beat since joining the Dodgers at the trade deadline, either. In his two starts (one of which was rain-shortened) he has thrown 10.1 IPs and only allowed 8 H and 1 BB, while punching out 16. Simply put, Scherzer remains as elite as ever.

The Mets will counter with Carlos Carrasco, who has been hit hard since returning from a season-long stint on the IL. He has a bloated 6.75 ERA and 1.93 HR/9, albeit in just 9.1 IPs across his three starts. His 4.68 FIP and 3.61 xFIP suggest happier days are ahead, but it’s tough to see that turnaround beginning tonight when he faces a Dodgers lineup that boasts a .334 wOBA against RHPs,  fourth-best in the majors. The net-net is that Carrasco remains a quality pitcher, but faces a tough matchup tonight.

Scherzer harassed the Mets for 7 years as an in-division rival with the Nationals. He projects to do the same tonight. New York has stuffed its lineup with 5 left-handed bats to try to gain a platoon advantage, but such an advantage doesn’t exist for the split-neutral Scherzer. His wOBA (.271 vs. RHBs, .251 vs. LHBs), K/9 (12.42 vs. RHBs, 11.75 vs. LHBs) and FIP (3.55 vs. RHBs, 3.44 vs. LHBs) are all similar this season regardless of handedness. The Mets have a below-average offense against righties by almost every meaningful measure. Runs will be extremely hard to come by for the hosts tonight.

Despite Scherzer’s smash spot, the game total sits at an all-too-normal 8. The line opened at 7.5, but has moved after the over received more than 66% of total bets. The under has seen 55% of the money though, suggesting that sharps still see this as being more low-scoring than not. Similarly, the Dodgers have received 83% of the moneyline bets, but 91% of the money.

Ballpark Pal projects that Citi Field will see the biggest weather-related offensive bump in the majors today. Carrasco and Scherzer grade out as the pitchers most affected by today’s forecast too, giving up almost 2 extra bases a piece. That said, a ball can’t carry if it can’t be hit, so I see this situation hurting Carrasco far more than Scherzer.

Neither starter will escape unblemished, but Carrasco is much more likely to be hit harder – or at least while he’s in the game. The right-hander hasn’t thrown more than 62 pitches in a start, so is likely to be on some type of pitch limit. The Mets bullpen has been heavily used the past two nights, so I think there’s an opportunity for the Dodgers to pull away in the middle innings.

I’m not one to ever wager on an exact score, but from a “feel” standpoint, this game has all of the makings of a 6-2 Dodgers win. Based off the current lines at PointsBet, here are my recommended picks: