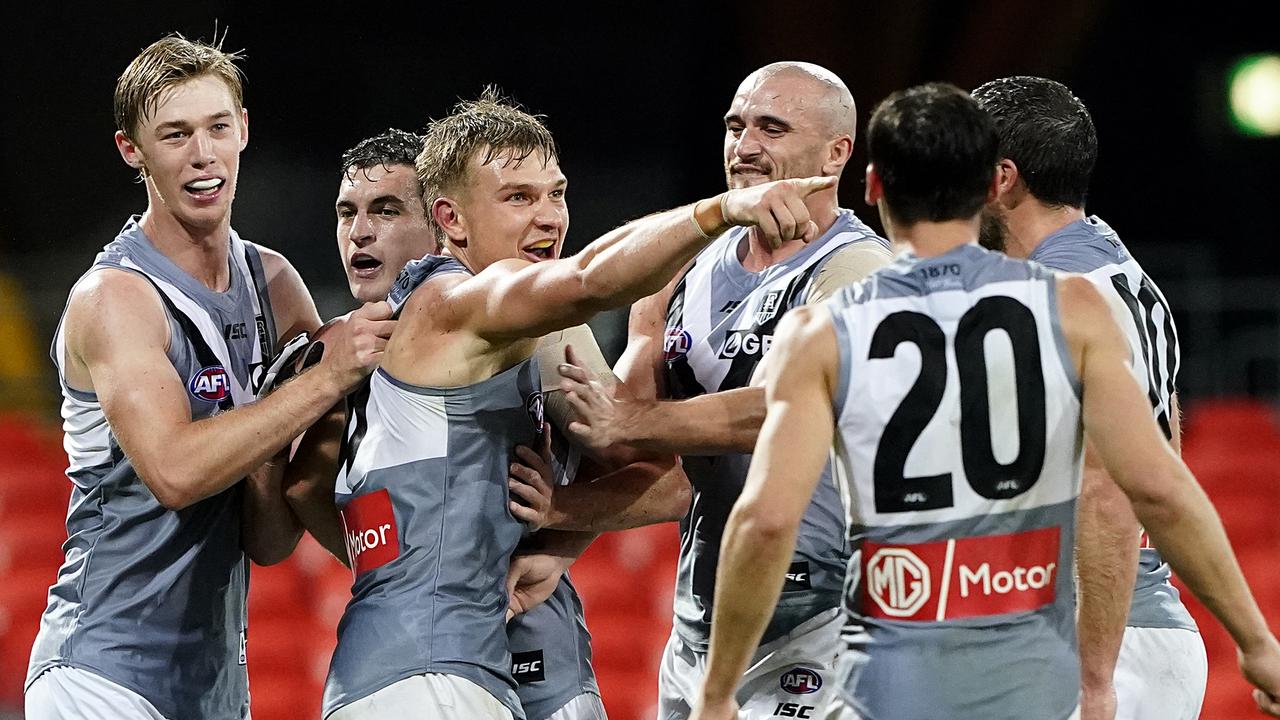 Port Adelaide managed to secure a clutch win away to the Western Bulldogs in the final round of the season to finish in the top two on the ladder. As a result, the Power now get a home qualifying final at Adelaide Oval where they will fancy their chances of winning their way through to a prelim. It’s been another really strong home and away season for the Power who ended up winning 17 of their 22 matches.

Geelong looked home and hosed in their most recent outing against the Melbourne when they led by 44 points at one stage during the third quarter. However, from that point onwards they failed to kick another major and ended up going down in demoralising fashion via a kick after the siren. The Cats slipped to third on the ladder as a result and must now travel to Adelaide for a qualifying final as the away team for the second straight year.

Port Adelaide and Geelong will meet for just the second time this season when facing off on Friday. The first meeting, which came in Round 13 at Adelaide Oval, saw the Cats get the chocolates by 21 points in a shootout. In our opinion, the high-score from that particularly clash looks like an anomaly when you consider all nine of their previous matches saw the total score fall short of the total match points line. We expect normality to resume this weekend and for this to be a low-scoring arm-wrestle.

Sydney were able to cap off a fantastic home and away season with a dominant win over the Suns in Round 23. They piled on 136 points in what was their highest score of the year and that was led by Buddy Franklin who kicked six goals to come within eight of the magical 1000-goal mark. The Swans ended up finishing sixth on the ladder to earn themselves a home elimination final, but unfortunately due to Covid outbreaks in Sydney, they’ll have to settle for a home final in Tasmania.

GWS hit some of their best form in the backend of the season to ensure they clinched a finals berth. The Giants knocked off the Blues by 14 points in the final round of the season to make it wins in each of their last three and four of their last five games, with two of those coming against top eight sides. In more positive news, captain Stephen Coniglio is a chance to return to the field this weekend after a long layoff due to injury.

This is probably the toughest match to predict of all four finals on this weekend, because both sides enter the weekend in really good winning form. However, consistency over the course of the season does give the Swans the slight edge in this elimination final, which is shown in the betting market. It certainly won’t be a high bet game for us, but we do lean towards backing in the Swans to cover the small spread as the ‘home’ team.

Melbourne secured the minor premiership in remarkable fashion last weekend after overcoming a 44-point deficit on the road against Geelong. The Demons kicked six goals to nil in the final term to retain top spot on the ladder and earn themselves at least two ‘home’ finals. Due to Victoria being in lockdown, the Demons have opted to play their home qualifying final at Adelaide Oval, where they’ve won eight of their last 10 games.

Brisbane were a huge longshot to finish in the top four with three weeks to go in the home and away season, but three straight wins for them and three straight losses for the Western Bulldogs saw the Lions earn themselves a double chance in the finals. Impressively, their forward line has been firing on all cylinders of late, with four scores of 118 or more in their last five games.

The Demons got the better of the Lions by around four goals when they met during the home and away season and that match was also played on a neutral venue. Fast forward to this weekend and not much has changed as the Demons are still clearly the more rounded and consistent team. As a result, we’re more than happy to back them in to get the job done and cover the small spread.

Western Bulldogs were sitting either first or second on the ladder for nearly 90% of the season, but suffered one of the great chokes to eventually finish the home and away season in fifth. They lost each of their last three games, two of those to teams ranked 8th or lower, which has seen them cough up their double chance in the finals and made it extremely difficult to win the premiership.

In complete contrast to their opponents, Essendon have finished the season on fire with three wins on the spin to secure eighth position and a finals berth. It’s truly been a fantastic resurgence by the Bombers this season who sport the youngest list of all finals teams this season. They will have to call on a miracle if they’re to win the premiership from eighth however, especially when you consider they’re 0-4 against the top four sides this season.

These sides met each other just a couple of weeks ago in Melbourne and it was the Bombers who caused a shock upset win by 13 points. That loss sparked a three-game losing streak for the Bulldogs who will be low on confidence as a result. On paper the Bulldogs still look the better outfit of the two, but confidence is a big thing in football and it’s certainly with the Bombers at the moment. Conditions in Tasmania will also help the ‘away’ team here, which makes taking them to cover the spread the best way to play this one.