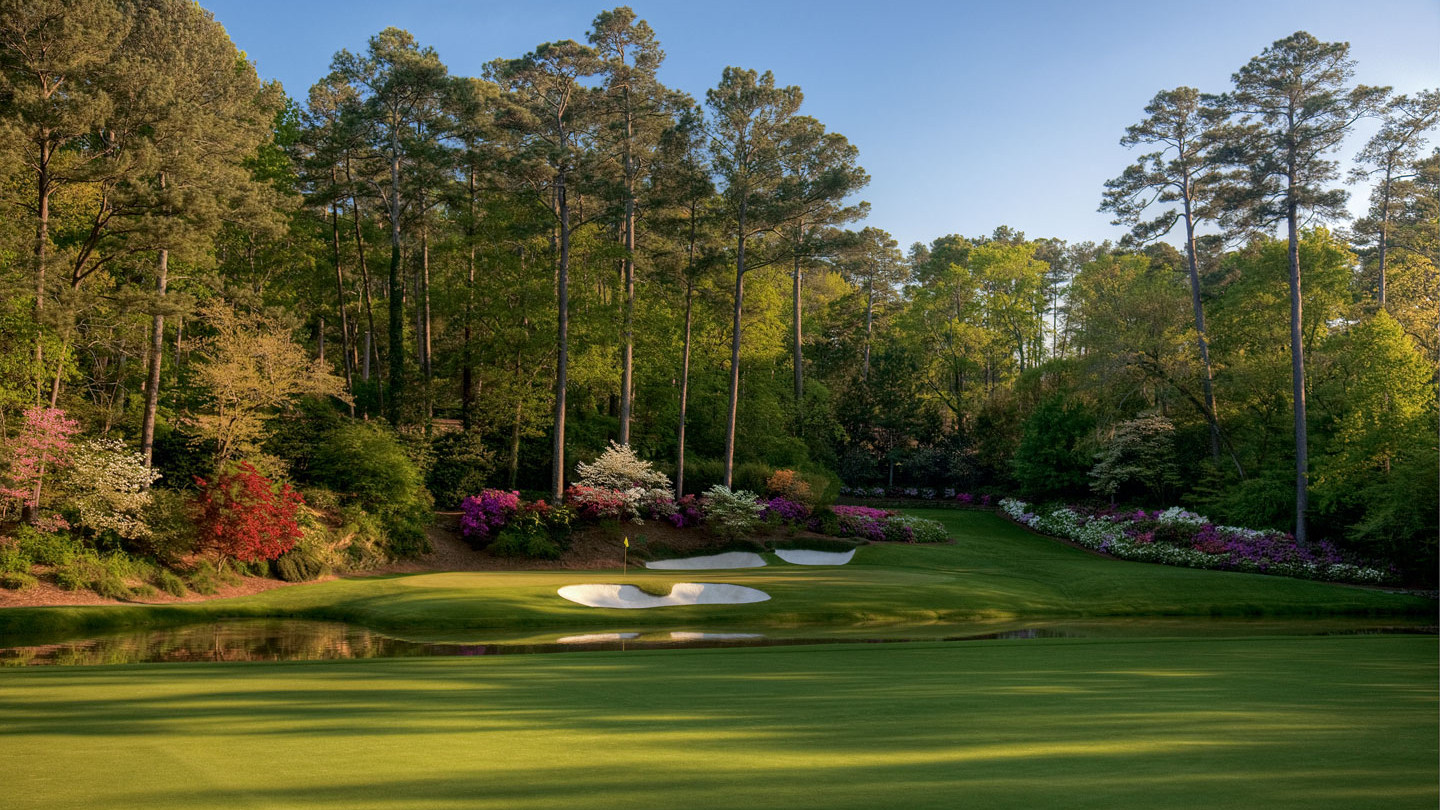 It’s finally arrived! The 2020 Masters will be played this week from Augusta National Golf Club in Georgia. It will be the third and final major championship of the COVID-19 affected season and will bring together the best golfers in the world fighting for a green jacket.

We have a monster preview, taking a look at the field, course, power rankings, dark horses and best bets for the 2020 Masters below.

The action gets underway at around 8am (ET) on Thursday morning and while traditional coverage will be shown on TV, you can also view every single shot from every player live on The Masters website!

As expected, the top players in the world will assemble on Augusta for The Masters this season. While many are writing him out of contention due to some average form in the lead up, the headline act is no doubt Tiger Woods, who will be hunting a 16th major championship and a record tying 6th green jacket as he defends his title.

The co main-event will be Bryson DeChambeau, who is looking to stranglehold Augusta National with length off the tee as he did to Winged Foot in the U.S. Open. The other major champion in 2020, Collin Morikawa, will also be looking to cap off what has been a remarkable year to date. 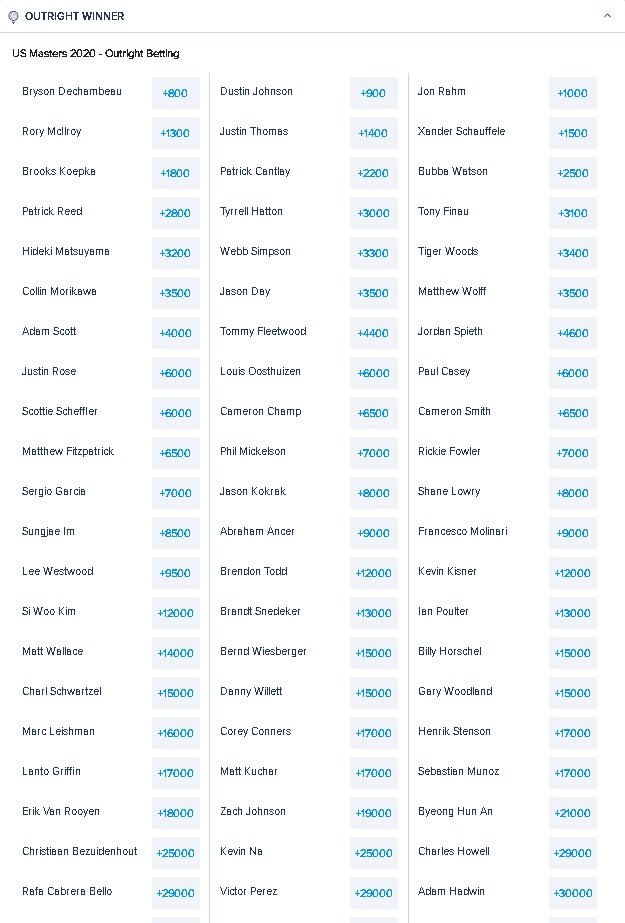 What more is there to say about Augusta National that hasn’t already been said? The most famous golf course in the world will show off it’s fall look this year with The Masters to be played in November instead of earlier in the year. The course is so finely curated that it’s highly unlikely that it will play drastically different to normal, but we can see it being a touch softer and slower, which could bring some of the elite putters back to the field just a touch.

The highlight of the course and of the coverage is Amen Corner, the three hole stretch where The Masters are so often won and lost on championship Sunday. Last year, it was the Par 3 12th where everything came undone for a host of players, allowing Tiger Woods to stroll through for the win. Will Amen Corner provide drama this year?

JT is our No.1 ranked player heading into this weekend as he looks to secure his second major after winning the PGA Championship back in 2017. Thomas has improved in every trip he has made to Augusta National, finishing T39 in his first appearance followed by T22, T17 and T12 in his next three. There are really no flaws to his game, which is what you need to be successful at Augusta. 10 of his 13 PGA Tour victories have come post-August.

Many have DeChambeau atop their rankings this week but for all of his dominance with his new found approach to golf, there is still one place where it is completely unproven, that is Augusta National. We wouldn’t be surprised if he comes out this week and absolutely monsters this course off the tee, but we are erring on the side of caution here when it comes to the Scientist. Was fantastic in his U.S. Open win at Winged Foot and backed it up with a competitive T8 at the Shriners.

Barely missed out on picking up his first major championship at The Masters last year, finishing 2nd to Tiger Woods after a blistering final round of 68. The loss is one of many near misses in majors for Schauffele, who seems to find himself in contention more often than not. In 13 career majors, the youngster has finished in the top 10 on seven occasions and the top 25 on 10 occasions. He was the best off the stick at the Tour Championship last month and followed that up with a 5th at the U.S. Open and a 2nd at the CJ Cup.

Say what you want about McIlroy choking multiple times in The Masters but the fact of the matter is that he has put himself in contention to win more than anyone over the last decade. He has finished in the top 10 in five of his last six trips to Augusta and has found some decent form over the past few monsht with solid finishes at the Tour Championship, U.S. Open and the relocated Asian swing events. Seems to have a new lease on life after thr birth of his first child and is playing with a lot less pressure on him, which is usually when he is at his best.

The No.1 ranked player in the world is that for a reason. He has been the best player in the world since the resumption of the PGA Tour from the COVID-19 break, racking up three tournament wins at the Travelers, Northen Trust and Tour Championship as well as a further four top six finishes including a T2 at the PGA Championship and a T6 at the U.S. Open. Has reeled off four straight top 10 finishes in The Masters.

The Spaniard hasn’t played a lot of golf lately but when he has suited up, he has put himself in contention for the vast majority. Was T2 at the ZOZO Championship behind only Patrick Cantlay a few weeks ago and was dominant in the FedEx Cup Playoffs, picking up a win at the BMW Championship and two 6th place finishes at the other two events. Has finished in the top 10 in the last two Masters events and a potentially softer November Augusta should suit him.

The gap between Cantlay’s best and worst is probably the largest of anyone on this list, so it’s hard to have him any higher than seventh. We’ve seen him in contention plenty of times this season, most recently at the ZOZO Championship, which is won a few weeks ago. We’ve also seen Cantlay have some shocking tournaments to date. At his best, he’s proven that he can mix it with the best at Augusta and he’s clearly in some good form after his win at the ZOZO.

Finished T10 in his first trip to Augusta after dislocating his ankle in the Wednesday practice round. One year later he was playing in the final group alongside Tiger Woods and was right in the mix until an unfortunate aquatic mishap on the Par 3 12th. Augusta seems to set up really well for Finau and he has been in some solid form of late.

The two time green jacket winner has to be one of the serious contenders any-time he tees off at Augusta. The course sets up so well for Bubba, being a left hander who is able to shape the ball both ways is a massive advantage both off the tee and on approach. After a missed cut in 2017, Bubba has bounced back with two solid finishes in his last two trips to Augusta and brings solid form into the tournament after a T7 and T4 across the relocated Asian swing events.

Without doubt the biggest question mark of this top 10 list but you can’t deny the Australian’s form at Augusta National. He has played in The Masters nine times, making the cut eight times and finishing in the top 10 on four different occasions. After a tough run for the last few months, seems to have found form at the Houston Open with a T7 finish. Was T5 and in contention at Augusta last year.

Jordan Spieth (+4000) It wouldn’t be Masters week without a sneaky little bet on Jordan Spieth at high odds. No matter what sort of demons Spieth is battling inside his own head, when he steps onto the tee at Augusta, all of that seems to fade away. Arguably knows the course better than anyone outside of four or five players this week and is still one of the best putters in the world.

Rickie Fowler (+5000) Another one of the premier putters in the world who has found himself in contention regularly at Augusta throughout his career. Has finished inside the top 12 on five of his last six trips to The Masters. Only a fool would write Fowler off here, despite his recent form.

Cannot get enough of Xander Schauffelle this week. The kid just turns into a different animal when the pressure is turned up to fever pitch. He has been arguably the most viewed golfer in the world on the Sunday broadcasts of major championships over the past few years and it seems like only a matter of time before he breaks through for his maiden major win. Regardless of whether he lifts the trophy on Sunday, we think he will be right in the mix late in the afternoon. 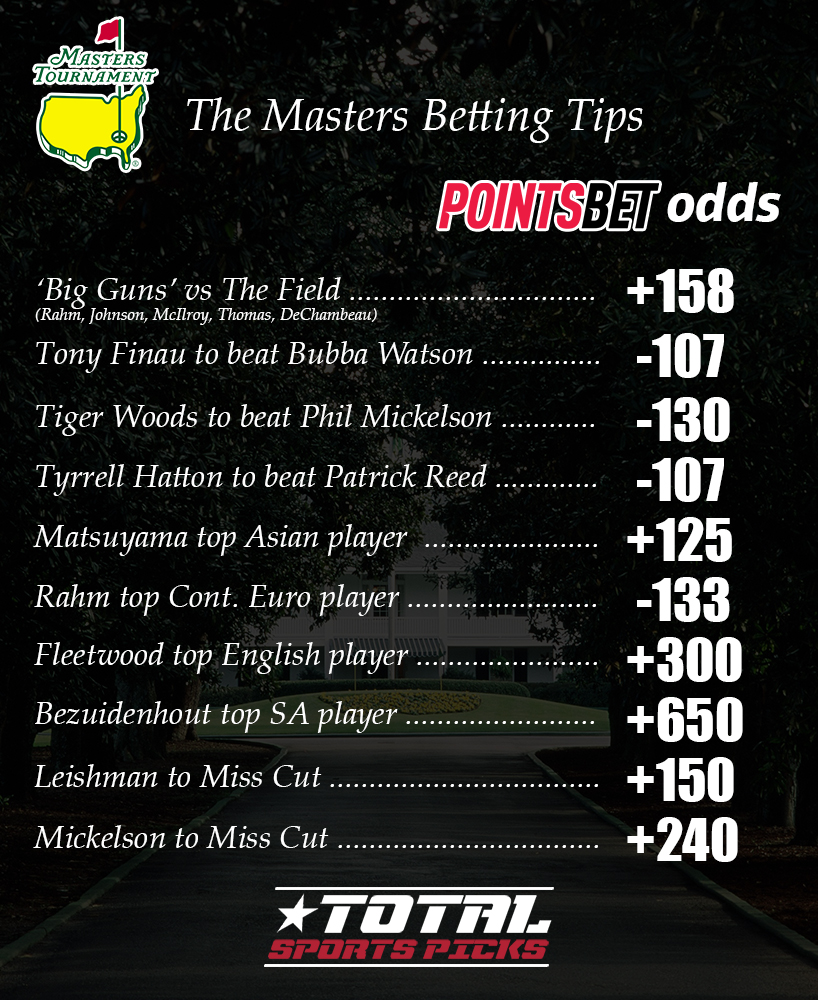