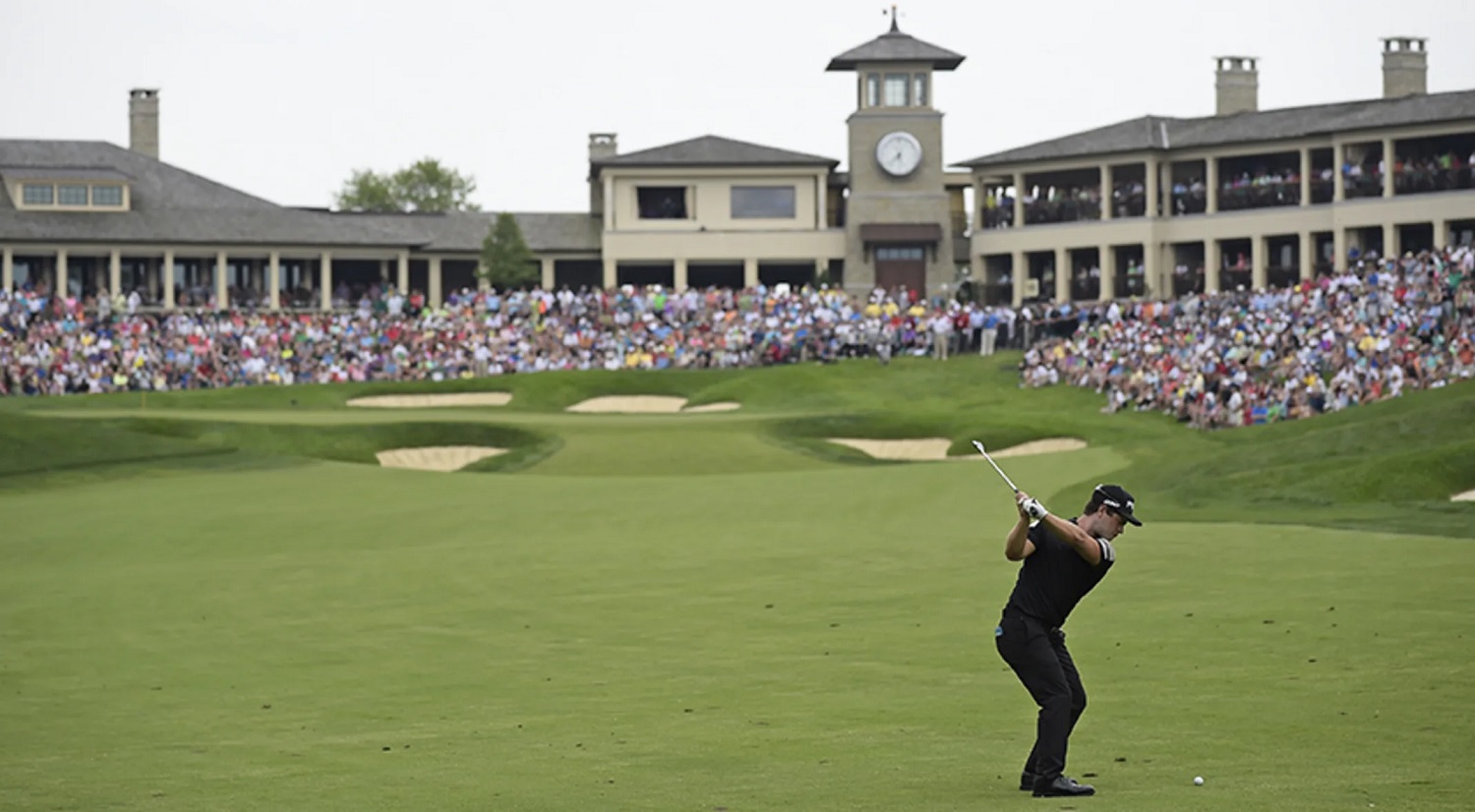 The 2020 PGA Tour continues this Thursday morning as we head to Muirfield Village Golf Course in Dublin, Ohio for the first of back to back tournaments at the course. The Workday Charity Open will serve as a one off replacement tournament for the cancelled John Deere Classic and will be held at the famous Muirfield just one week before the Memorial Tournament.

As usual, we have a full preview and betting picks for the week’s action in the PGA Tour, which kicks off early Thursday morning from Dublin.

With back to back tournaments from Muirfield Village coming up, there is no doubt that many players will be using this week’s event as a good opportunity to find some form and get some quality rounds in at the course before the bigger Memorial Tournament gets underway next week.

Because of the Memorial being next week at the same course, the Workday Charity Open field is quite a strong one, with 11 of the top 20 ranked players in the world set to line-up. Those 10 read jon Rahm, Justin Thomas, Brooks Koepka, Patrick Reed, Patrick Cantlay, Xander Schauffele, Justin Rose, Marc Leishman, Gary Woodland, Matt Kuchar and Louis Oosthuizen.

Patrick Cantlay won the Memorial Tournament last season and will be back at Muirfield looking to pick up at least one more trophy, possibly two over the next two weeks. Tiger Woods has won at the Memorial five times but has been a no show since the PGA Tour returned four weeks ago. Expect him to play next week or suspect something more serious on the injury front with the GOAT. 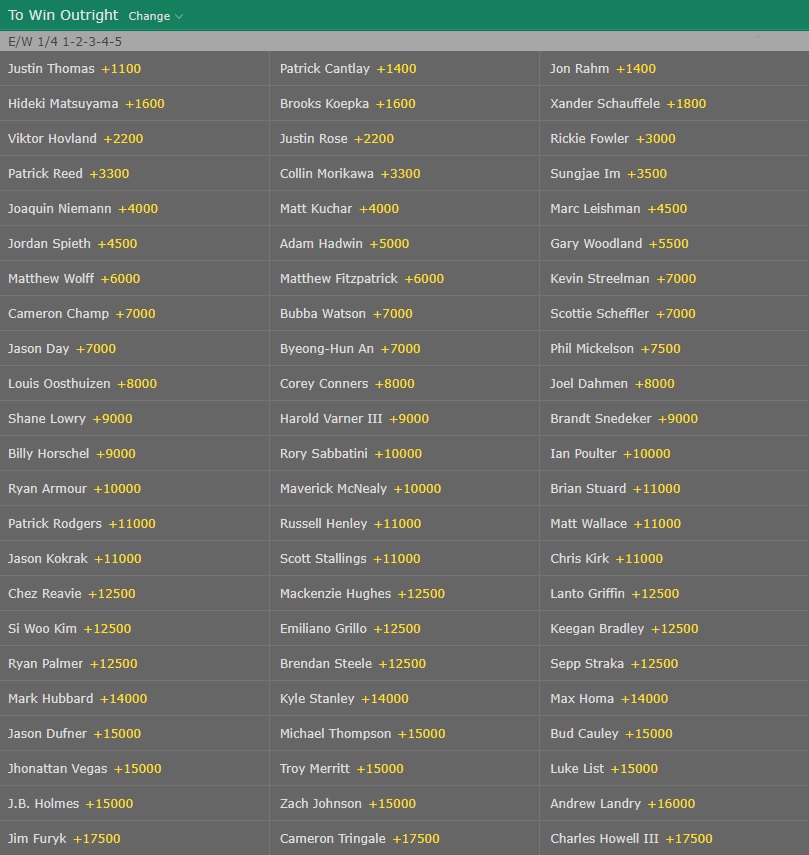 Muirfield Village Golf Club ranked as the 10th hardest course on the PGA Tour in the 2019 season based on the number of strokes players had against par. While it is around average length for a Par 72 and the fairways are relatively wide, if you miss those fairways, you are met with extremely punishing rough.

Muirfield’s main defence, however, comes in its green complexes and surrounding areas. There is no doubt that we will be placing more emphasis on putting and scrambling this week than we will be on tee to green play.

Thomas enters the new week as the No.1 player on our Workday Charity Open power rankings despite missing the cut in his last tournament. After two solid outings following the return of the PGA Tour with a 10th at the Charles Schwab and a 8th at the RBC Heritage, Thomas missed the cut at the Travelers but will come back for the Workday after a week off to rest and re-group.

Has a decent record at Muirfield, finshing 4th at the Memorial in 2017 and 8th in 2018. Should be right in the mix come Sunday, with extra incentive as he hunts FedEx Cup points that could see him jump into top spot in the standings by week’s end.

Another Justin at the top of the pile this week as Englishman Justin Rose lines up at Muirfield Village Golf Club for what will be the 14th and 15th time over the next two weeks. In that span of 13 tournaments, the veteran has racked up 10 made cuts, 9 top 25 finishes and 7 top 10 finishes. He won the Memorial back in 2010 and will be hunting his second win at Muirfield over the next two weeks.

Comes into the tournament with solid form, finishing 3rd at the Charles Schwab Challenge before a 14th place finish at the RBC Heritage two weeks ago.

The reigning champion at Murefield won’t officially defend his title until next week but he will be the pseudo title holder when the Workday Charity Open kicks off on Thursday. After finishing 4th at the Memorial in 2018, Cantlay went a few steps better last season, winning the tournament after shooting 68, 69, 68 and a fourth round 64 to come from the clouds and win at 19 under par.

The only reason he is not higher on this list is because is because of his lack of competitive golf of late. He has played just the one tournament since the PGA Tour resumed, finishing 11th at the Travelers last weekend.

Kooch has a ridiculous record at Muirfield, racking up 12 made cuts and, 10 top 25 finishes and 7 top 10 finishes in 14 events since the year 2002. He also won the tournament in 2013 and outside of missing the cut last season, he has not finished outside of the top 26 since 2003. Kooch also seems to relish the tournaments where his counterparts might not be completely locked in. With many of the top names having one eye on the Memorial next week, we might see Kuchar sneak through for a high finish here.

Fowler plays at Muirfield ever year, without fail, and generally does pretty well. He has played the Memorial every season since 2010 and in those 10 trips he has seven made cuts, five top 25 finishes and three top 10 finishes. He also looked pretty solid at the Rocket Mortgage on the weekend after two missed cuts at the Charles Schwab and RBC Heritage, finishing T12 including two rounds of 67.

Love the look of Kuchar this weekend. It’s hard to pick a winner of a golf tournament at the best of times with a field of 160+, but if you are comfortable lowering your odds to target a top 20 finish then Kuchar is the play. Kuchar is a lock to make the cut and unlike a lot of other players who put it all on the line for birdies in the 3rd and 4th round if they are trailing, Kooch doesn’t change his game-style, meaning he slowly rises up the leader board with pars and the odd birdie. Back him to finish in the top 10 at good odds.

Pat Perez (+15000) Missed the cut in his first five trips to Muirfield, since then, has not missed a single cut in 10 straight appearances at the Memorial.

Jason Dufner (+15000) Seems to enjoy Muirfield, having won the Memorial in 2017 and finishing T7 last season. Has two made cuts from three tournaments since the season resumed.

Kyle Stanley (+10000) Three top ten finishes in his last five trips to Muirfield and a solid T24 finish at the RBC Heritage a few weeks ago.